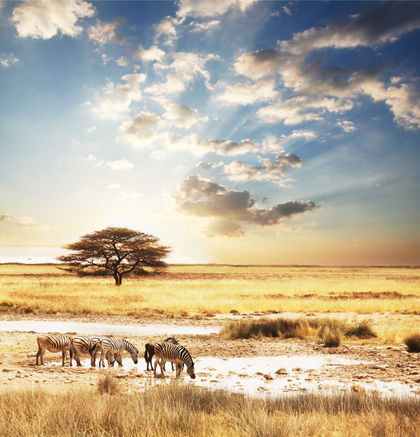 South Africa is situated at the southern tip of the continent of Africa. Ranging from west to east across its northern border are the neighboring countries of Namibia, Botswana, and Zimbabwe; Mozambique lies to the east, as does the small nation of Swaziland, which is nearly encircled by South Africa. Another small nation, Lesotho, lies entirely within the borders of South Africa, in the east central region. Total land borders measure 4,750 kilometers (2,952 miles). South Africa has a coastline of 2,954 kilometers (1,836 miles), with the cold Atlantic Ocean on the west coast and the Indian Ocean on the east coast. The area of the Republic of South Africa is approximately 1,219,912 square kilometers (471,008 square miles), making it slightly less than twice the size of the state of Texas, or slightly bigger then Holland, Belgium, Italy, France, and Germany combined. The capital of Pretoria is located in the northeast central area of the country. Other major cities include Cape Town, Port Elizabeth, and Durban on the coast, and Johannesburg, Soweto, and Bloemfontein in the interior of the country.

The last official census taken in South Africa in 1996 revealed a population 40,582,573 people. In 2001, estimates are that the population of South Africa has grown to 43,586,097. The population of South Africa can be divided into the following main racial groups: Africans (blacks), whites, coloreds (mixed-race descendants of early white settlers and indigenous people), and Asians. The general indication is that the proportion of Africans has slowly been increasing and the proportion of whites decreasing. The proportion of Asians and coloreds has remained quite constant. In 1996, Africans made up76.6 percent of the population, whites made up 10.9 percent, coloreds 8.9 percent, and Asians 2.6 percent; the remaining 0.9 percent represented a variety of races.

The population growth rate for the entire population is a very low 0.26 percent. The birth rate in South Africa was estimated at 21.12 per 1,000 people in 2001, and the birth rate was estimated at 16.77 per 1,000 people. It is likely that the fertility and mortality figures could change due to the HIV/AIDS epidemic. The spread of HIV/AIDS in South Africa was very rapid in the 1990s. United Nations (UN) estimates indicate that currently 1 in 8 adult South Africans is infected with HIV. The epidemic has exacted tremendous social and economic costs. By affecting the population's most productive age group, it hampers the labor supply.

About 64 percent of the South African people live in urban centers, and that number is expected to grow because more people move to urban areas every year. The migration rate creates increasing demands on municipal services such as sanitation, water provision, safety, security, as well as schools, hospitals, and recreational facilities.

The population of South Africa is young, with 32 percent of people between the age of 0 and 14, 63 percent between 15 and 64, and only 5 percent over the age of

The energy sector is critical to the South African economy, contributing about 15 percent of GDP and employing about 250,000 people. South Africa's energy resource base is dominated by coal. Many of the deposits can be exploited at extremely favorable costs, and as a result, a large coal-mining industry has developed. In fact, South Africa ranks as the world's fifth largest coal producer. In addition to the extensive use of coal in the domestic economy, large amounts are exported. South Africa is the second largest exporter of steam coal. South Africa produces 5,000 to 1 million tons of coal per month.About 55 percent of South African coal-mining is done underground. The coal-mining industry is highly concentrated, with 3 companies, namely Ingwe, Amcoal, and Sasol, accounting for 80 percent of local production.

South Africa has 1 nuclear power station in operation. The Eskom nuclear power station, Koeberg, is located in the western Cape and operates 2 reactors with a capacity of 1,840 megawatts. Nuclear power contributed 6.87 percent of the country's electricity supply in 1999; the remainder was supplied by fossil fuels, both coal and petroleum.

South Africa consumed some 21 billion liters of liquid fuels in 1998. About 36 percent of the demand is met by synthetic fuels (synfuels) produced locally, largely from coal and a small amount from natural gas. The rest is met by products refined locally from imported crude oil. Sasol is the largest petrochemical corporation in the country. Apart from limited gas and oil reserves in the Mossel Bay area, the country does not have significant commercially exploitable gas or crude oil reserves. In addition to coal gas and liquid petroleum gas, South Africa produces about 1,237,000 tons of gas and 250,000 tons of condensate liquid fuels.

South Africa, which supplies two-thirds of Africa's electricity, is one of the 4 cheapest electricity producers in the world. About 92 percent of South African electricity is produced from coal, with generation dominated by the utility Eskom. It is the world's fifth largest electricity utility, with an installed generating capacity of about 39,870 MW. All told, South Africa produced 186.903 billion kilowatt hours (kWh) of electricity in 1999.

Exports of manufactured goods experienced growth between 1988 and 1995. The driving forces behind this growth included the introduction of the General Export Incentive Scheme (GEIS) and consecutive phases of the motor industry development scheme; the real depreciation of the Rand; excess manufacturing capacity as a result of recessionary conditions forced on the domestic markets after 1985; and the opening up of international markets as sanctions subsided from the early 1990s. The average annual growth rates in the real output of the manufacturing subgroups from 1995 to 2005 are expected to vary between 0.5 percent in the cases of tobacco products and leather products to 7.5 percent in the case of plastic products. Other industries with good growth potential are industrial chemicals, rubber products, and paper.

The basic iron and steel industry is relatively important within South African manufacturing. There are unprecedented opportunities for growth and prosperity in the global steel industry across the globe, the common thread being privatization and free market focus. The already privatized South African steel industry will have to position itself to compete in the global steel economy and to provide goods for the increasingly segmented market. Possibilities are links with overseas producers and greater specialization, which will bring about greater exports as well as imports of steel products.

In the context of the country's economic and political transformation, tourism has been accepted by the government, business, and labor as one of the key drivers for job growth, wealth creation, and economic empowerment. After years of isolation, South Africa has emerged as a highly attractive tourist destination.

There are some major strengths operating in South Africa's favor which can facilitate further growth in tourism. Among the top tourist attractions are Victoria and Alfred Waterfront in Cape Town, Cape Point, Table Mountain, the wine region in the western Cape, and numerous other attractions. South Africa attracts more tourists than any other country in Africa. The country's scenic beauty and wildlife remain the biggest attractions for international tourists. Tourism is the fourth biggest industry in South Africa, supporting some 1,200 hotels, 2,000 guesthouses, and 8,000 restaurants. Between January and August 1998, there were 871,414 foreign visitors to South Africa. During 1998, economic conditions, in particular the devalued rand, made South Africa one of the cheapest places in the world to visit.

According to a report released in September 1998 on the direct and indirect effect of tourism on South Africa's economy, the tourism industry provided jobs to more than 737,600 people. It was estimated that the number could increase to 1.25 million by the year 2010.

The fastest growing segment of tourism in South Africa is ecological tourism (eco-tourism), which includes nature photography, bird-watching, botanical studies, snorkeling, hiking, and mountain climbing. Village tourism is becoming increasingly popular, with tourists wanting to experience South Africa in the many rural villages across the country.

With tourism currently contributing approximately 5 percent of GDP against an international norm of between 8 and 9 percent, the potential for significant growth in international tourism and its contribution to GDP is immense.

South Africa has a well-developed financial system. Legislation governing the financial sector has been streamlined to meet international norms and provides for the introduction of major foreign financial institutions into the local market. The banking industry in South Africa currently has 55 banks, including 12 branches of foreign banks, and 4 mutual banks are registered with the Office of the Registrar of Banks. Furthermore, 60 foreign banks have authorized representative offices in South Africa. Several major groups dominate the South African banking sector: ABSA Group Limited, Standard Bank Investment Corporation Limited, First National Bank Holdings Limited, and Nedcor Limited. These groups maintain extensive branch networks across all 9 provinces and together hold 70 percent of the total assets of the banking sector.

The major banks offer a wide range of services to both individual and corporate customers. A single relationship banking, with its emphasis on universal banking, instead of isolated services, has gained importance. Nevertheless, several banks specialize in providing merchant banking services, securities underwriting, or services in other niche areas.

On 31 December 1998, the 55 registered banking institutions collectively employed 123,272 workers. Their offices (including both branches and agencies) totaled 3,251, that is, approximately 1 office for every 13,000 inhabitants. If the 2,442 post offices through which the Postbank offers its services are included, banking services are provided at some 5,693 offices throughout the country, or 1 location for every 7,500 inhabitants.

Several new banks have been registered, and competition has intensified, both among banks and between banks and other financial service providers. As a result, the assets held in the banking sector have expanded rapidly, from R39 billion in 1980 to R654 billion in December 1998.

The Johannesburg Stock Exchange (JSE), formed in 1887 and a member of the Federation of International Stock Exchanges since 1963, is the tenth largest stock exchange in the world by market capitalization . The South African Futures Exchange (SAFEX), established in 1990, trades in equity futures contracts, options on equity futures, and a variety of other futures contracts.

The growing momentum in the field of public-private partnerships in project financing and the emergence of powerful black economic empowerment groups continue to drive innovation and efficiency in this sector.

South Africa has no territories or colonies.

just to correct this info on our population. We are currently standing at around 48,687,000. And there are around 1 million indians.
2
Johan Pienaar

There are no more 1 and 2 cents coins being produced in South Africa anymore. This was stopped a long time ago. As well as 2 and 5 rand notes can't even remember those currencies within South Africa.