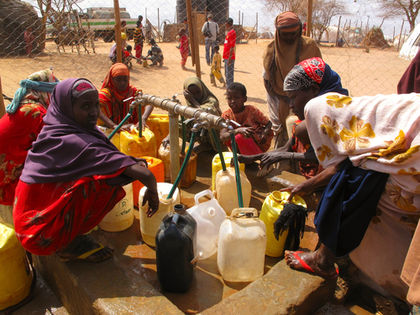 Somalia, formerly known as the Somali Democratic Republic, is a coastal country covering a land area of 637,657 square kilometers (246,199 square miles) and a water area of 10,320 square kilometers (3,985 square miles), with a land-bordered circumference of 2,366 kilometers (1,470 miles). It has a coastline of 3,025 kilometers (1,880 miles) stretching along the Indian Ocean to the southeast and along the Gulf of Aden in the southern mouth of the Red Sea to the north. These coastal features give the region the name the Horn of Africa. To the north, Somalia faces the Arabian Peninsula with which it has had centuries of commercial and cultural interaction. To the northwest it shares a border with the Republic of Djibouti (58 kilometers, or 36 miles), to the west by Ethiopia (1,626 kilometers, or 1,010 miles) and southwest by Kenya (682 kilometers, or 424 miles).

The capital is Mogadishu, which in 1987 had a population of 1 million, followed by the other major towns of Hargeysa, with 400,000; Kismaayo, with 200,000;Marka, with 100,000; and Berbera, with less than 100,000. Since the 1991 outbreak of civil strife, the northern region—formerly a British colony—has formed an internationally unrecognized de facto autonomous country, Somaliland, with Hargeysa as its capital.

Somalia is principally desert. There is a monsoon in the northeast from December to February, with moderate temperatures in the north but very hot in the south. From May to October the southwest monsoon brings irregular rainfall. Between monsoons it is generally very hot and humid. Somalia is divided into 3 main topo-graphical regions. The northern region is somewhat mountainous with high plateaus ranging from 900 meters (2,953 feet) above sea level to peaks at 2,450 meters (8,038 feet) above sea level in the northeast. The second region extends south and west to the Shabeelle river and hosts a plateau elevated to a maximum of 685 meters (2,247 feet) above sea level. The third region lies between the Jubba and Shabeelle rivers and is a low agricultural land that also extends into a low pastureland lying southwest of the Jubba river toward the Kenyan border. The country's main drainage is provided by the Shabeelle and Jubba rivers, which originate in Ethiopia and flow toward the Indian Ocean, although the Shabeelle dries before reaching the ocean. These rivers are not navigable by commercial vessels, but they do supply irrigation. Despite its long coastal shoreline, Somalia has only 1 natural harbor, at Berbera.

Determining the population of Somalia has long been a difficult task. According to the February 1975 population census, the population of Somalia was 3,253,024 (excluding adjustment for undercounting), while the February 1986 census recorded it at 7,114,431, implying a doubling of the population over the decade. According to the United Nations (UN) estimates, the mid-year population increased from 7,875,000 in 1985 to 10,217,000 in 1997. However, the CIA World Factbook estimated the population in 2000 as 7,253,137. All such estimates were derived by extrapolating from official censuses taken in 1975 and 1986 by the Somali government. Such estimates are complicated by the large number of nomads and by refugee movements in a country that has been racked by war and famine for a decade.

Nearly 50 percent of the population are nomadic, moving mainly in the central and northern areas, where drought is an ever-present threat. Almost all the nomadic clans are accustomed to grazing on both sides of the border with Ethiopia. About 28 percent of the population are settled farmers, mostly in the southern areas between the Jubba and Shabeelle rivers. The population profile was estimated in 2000 as 44 percent in the 0-14 years age group, 53 percent between 15 and 64 years, and 3 percent in the 65 years and over age group.

Before the 1991 civil conflict, population density averaged 12 people per square kilometer (31 per square mile) but was unevenly distributed. The areas of greatest rural density were the settled zones adjacent to the Jubba and Shabeelle rivers, a few places between them, and several small areas in the northern highlands. The most lightly populated zones were in northeastern and central Somalia, but there were some other sparsely populated areas in the far southwest along the Kenyan border.

Somalia has no territories or colonies.