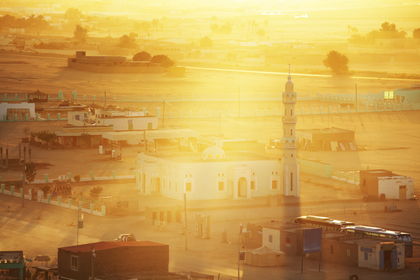 Republic of the Sudan

The Sudanese population is highly diverse, consisting of about 19 different ethnic groups and almost 600 subgroups. Most of the inhabitants are of black African origin (52 percent), 39 percent are Arabs, 6 percent Beja, and 3 percent foreigners and other small national groups. Cultural conflicts between the black Africans, who live mostly in the south, and the Arabics, who live mainly in the north, have been the source of many internal struggles within the country. The official language is Arabic, which is spoken by about 60 percent of the population. An estimated 115 tribal languages are spoken as well, including Nubian, Ta Beawie, Nilotic, and Nilo-Hamitic. English and several Sudanic languages are also spoken.

The population is relatively young: while 45 percent are younger than 14 years old, only about 2 percent are older than 65. A majority of the population (69 percent) lives in the rural regions, while 31 percent live in the urban areas. The average population density is 9.8 per square kilometer (25.4 per square mile). The highest density is in the western and some southern provinces of the country, while the northern part of the country is rarely inhabited.

Population development and assessment is complicated by a continuing civil war and famine. Many people fall victim to the conflict or die as a result of the famine or diseases, and some of them escape to find asylum in Chad or Uganda. The average life expectancy is estimated at 55.85 years for men and 58.08 years for women. The literacy rate is 58 percent for men and 35 percent for women.

Revenues from tourism could play a more important role in the future, but their contribution to the state budget is now very poor because of the low quality and standards. To increase revenues, the government, in coordination with the International Monetary Fund, has privatized many accommodations and tourist facilities. The government plans to enlarge usage of the Red Sea for special tourism activities, including wind surfing and diving possibilities. There are plans for the construction of new hotels, restaurants, and camps as well as tourist agencies. The Nile River could also be used for water sports.

The country has a total hotel capacity of 17,990 beds. The total number of hotels is 45, with another 48 in construction. There are 3 tourist resorts, 8 youth hostels, and 2 tourist camps. There are 3 five-star hotels in Khartoum (the Hilton, Grand Holiday Villa, and Palace), 1 four-star hotel (Meridien), and 5 three-star hotels. Khartoum and Port Sudan have the most accommodations.

Development of the tourism sector is complicated by the conflict in the south of the country and the unstable political situation. The government had difficulty attracting tourists and had difficulty getting Sudan added to the lists of world famous tourist places. Although the number of tourists is expected to grow in the future, Sudan could hardly attract as many tourists as neighboring Egypt at the end of 1990. Without a more stable political climate, Sudan will not be able to attract increasing numbers of tourists.

Sudan has no territories or colonies.