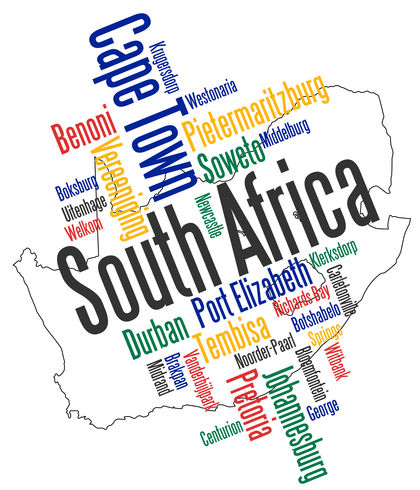 South Africa's trade and industrial policy is moving away from a highly protected, inward looking economy towards an internationally competitive economy, capitalizing on its competitive and comparative advantages. For years, South Africa's ability to trade with the outside world was severely limited by the sanctions placed on

South Africa's economy is still largely reliant on the export of primary and intermediate commodities to industrialized countries. However, manufactured goods account for about 70 percent of exports to Africa. Net gold exports are responsible for a large part of foreign exchange earnings. Earnings from this source, however, fluctuate with the shifting international gold price. Imports mainly consist of capital goods , raw materials, semi-manufactured goods (approximately 76 percent of total trade imports), and consumer commodities.

Trade with SADC countries increased dramatically during the period 1988 to 1997. At present, the ratio of South Africa's exports to imports to SADC countries stands at 6:1. Exports to the region are concentrated in high value-added sectors, such as minerals and base metals, chemicals, machinery, transport equipment, and food and beverages. The most important SADC purchaser of South African exports is Zimbabwe, followed by Mozambique, Zambia, Mauritius, Malawi, Angola, and Tanzania. Zimbabwe is also the largest source of imports, followed by Malawi, Angola, Zambia and Mozambique. The member states of the SADC are negotiating a Free Trade Agreement (FTA) to strengthen trade, investment, and industrial linkages within the region.

Thanks for these informtion, and would like to get some more recent information about the Trading figures and roles and purposes of AFRICA as an International trading organisation. thanks
2
prakash Ramchurrun

role of international trade organisation other than EU
3
Morne Lyon

My name is Morne Lyon. I am a economics student in South-Africa and I have a a few questions I think you can help me with.

I want to know -in your opinion- if a country's wealth is directly linked to the level and quality of its international trade activity and can you give me an practical example to support your views?

Also with reference to the many economic challenges that South Africa faces at present, do you think it would be preferable for the country to emphasise its developing country status (and thereby attract more trade preferences from bilateral and regional trading partners) or work towards developing a more developed country image in the eyes of other countries?
please give reasons for your views.

Thank you for taking the time to read this email. I am looking forward to hearing from you.

Hi my name is Queeneth, i am a 3rd year economics student, at the university of free state in south africa, i would like more information on th major tradind partners of south africa since the year 2000.

Why is international trade important for south africa?
6
Elijah

Hi,I just want opinion from you good people on can south africa afford to have a totally free trade with the rest of the world?
9
lindelwa

Hey my name is lindelwa,am a matriculant students..I jst wntd to know Why is international trade important for South Africa?
10
brian

Why is international trade important for SA?
Can SA afford to have totally free trade with the rest of the world?
11
Dipuo Maahilo

My question is why do we have to trade internationally? Why can't our Country Live on its own,because our country has more natural resources?
12
Kauthar

how can international trade not be important for SA
13
Teedow

it is essential to trade with other countries because its keep us unite as one.
15
ANTHONY YEBOA

I AM A STUDENT ENROLLING WITH SOUTH AFRICAN ADULT COLLEGE IN PRETORIA CENTRE, ALSO A GHANAIAN CITIZEN .BEARING A PERMANENT IDENTITY DOCUMENT OF SOUTH AFRICA..MY QUESTION , IS IT VITAL FOR SOUTH AFRICA TO CONVERT ALL STATE OWN ENTERPRISES INTO A PRIVATE OWN ENTERPRISE AND HOW IS IT TO BENEFIT THE STATE.
16
Paul thabiso

I enjoyed this article because it was helpful in my research.
I'd also like to know more about how current technology evolution will affect international trade in South Africa