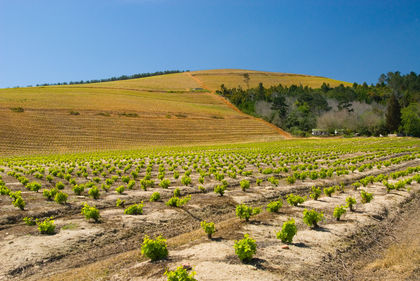 In monetary terms, agriculture's share of the economy has long since been outstripped by those of the mining and secondary industries. In 1960, agriculture contributed 11.1 percent of the GDP, down from about 20 percent in the 1930s. By 1999, however, agriculture's share of the GDP had dropped to 5 percent. Despite the farming industry's declining share of the GDP, it remains vital to the economy, development, and stability of the Southern African region. The various sectors of the industry employ approximately 1 million people, or 30 percent of the workforce.

Agriculture in South Africa has changed radically in recent years. Formerly, it was a highly regulated sector with subsidies and financial concessions available to farmers. But farming has been deregulated since the 1980s, and the agricultural sector is now expected to respond to free market conditions. Farmers seek the most competitive suppliers and purchasers and are increasingly using the South African Futures Exchange to exchange futures contracts and hedge prices for their products.

South Africa has what is known as a dual agricultural economy. On the one hand, there is a well-developed commercial sector; on the other hand, the majority of people engaged in agriculture are involved in subsistence-oriented practices in rural areas. In the predominantly white-controlled commercial sector, applied research and improved farm management have nearly doubled agricultural production during the past 30 years. Currently, South Africa is not only self sufficient in virtually all major agricultural products but in a normal year is also a net food exporter, making it 1 of 6 countries in the world capable of exporting food on a regular basis. Because South Africa's summer harvest season coincides with winter in the Northern Hemisphere, the country is well positioned to supply agricultural goods to a number of wealthy countries in the more developed world.

South Africa has developed 1 of the largest man-made forestry resources in the world. These plantations cover more than 1.4 million hectares with exports accounting for 35 percent of total turnover of forestry products. The 2 private pulp and paper manufacturers rank among the largest companies of their kind in the Southern hemisphere.

The largest area of farmland is planted in maize, followed by wheat and, on a lesser scale, sugar cane and sunflowers. About 15,000 farmers produce maize, mainly in the northwest, the northwestern, northern, and eastern Free State, the Mpumalanga Highveld and KwaZulu-Natal midlands. Local consumption of maize amounts to approximately 6.5 million tons, and surplus maize is usually exported. Wheat is produced in the winter rainfall areas of the western Cape and the eastern parts of the Free State. The 1998-99 season yielded 1.5 million tons. Barley is produced mainly on the southern coastal plains of the western Cape, accounting for more than 98 percent of locally produced barley. The 1998-99 season yielded 215,100 tons. Sorghum is cultivated mostly in the drier parts of the summer rainfall areas. Groundnuts are grown in the northern province, Mpumalanga, the northern Free State, and the northwest.

South Africa is the world's tenth largest producer of sunflower seeds with an annual harvest of between 186,300 and 780,000 tons. South Africa is also the world's tenth largest sugar producer. The bulk of the sugar crop is cultivated on the frost-free coastal areas and the KwaZulu-Natal midlands. However, about 10 percent is grown under irrigation in the southern parts of Mpumalanga. Deciduous fruit trees are grown mainly in the western Cape, as well as in the Langkloof Valley in the eastern Cape. This industry's export earnings represent 21 percent of the country's total earnings from agricultural exports.

Citrus production is largely limited to the irrigated areas of the northern province, Mpumalanga, the eastern and western Cape and KwaZulu-Natal. Pineapples are grown in the eastern Cape and northern KwaZulu-Natal. Other subtropical crops such as avocados, mangos, bananas, litchis, guavas, pawpaws, grenadillas, and macadamia and pecan nuts are produced mainly in Mpumalanga and the northern province. About 40 percent of the country's potato crop is grown in the higher-lying areas of the Free State and Mpumalanga. About two-thirds of the country's total potato crop is produced under irrigation. In terms of gross income to the grower— apart from potatoes—tomatoes, onions, green mealies, and sweet corn are probably the most important crops.

Cotton, produced mainly in the northern province, constitutes 74 percent of the natural fiber and 42 percent of all fiber processed in South Africa. About 75 percent of local production is harvested by hand. Virginia tobacco is produced mainly in Mpumalanga and the northern province. There are more than 1,000 growers in the country who produce an annual average of 33 million kilograms on about 24,000 hectares of land. The crop represents 173 different grades of Virginia and 5 different grades of Oriental tobacco.

Rooibos tea is an indigenous herbal beverage produced mainly in the Cederberg area of the western Cape. There are some 280 producers, and about 580 tons of tea are exported annually. Ornamental plants are produced throughout the country. They include nursery plants, cut flowers, and potted plants. The industry creates jobs for about 15,000 people. Proteas are the country's top export flowers.

Livestock is farmed in most parts of South Africa, though the numbers vary according to climatic conditions. The 1998 estimates for head of cattle and sheep are 13.8 million and 29.3 million, respectively. South Africa normally produces 85 percent of its meat requirements while 15 percent is imported from Namibia, Botswana, and Swaziland. In 1998, 1.7 million heads of cattle were slaughtered, and the gross value of the red meat industry was estimated to be about R4,954 million. Most sheep are fine-wooled Merinos (50 percent). The Dorper, a highly productive, locally-developed mutton breed for arid regions, and the Merino account for most of South Africa's mutton production. Marketing of wool is free of any intervention. The indigenous meat-producing Boer goat accounts for about 40 percent of all goats, and the angora goat, used for mohair production, for the remaining 60 percent. South Africa has about 3,500 angora farmers. Compared with the extensive cattle and sheep industries, the poultry and pig industries are more intensive and are located on farms near metropolitan areas. The predominant pig breeds are the South African landrace and the large white. South Africa accounts for 80 percent of world sales of ostrich products, including leather, meat, and feathers. In October 1997, Parliament approved legislation to allow the export of breeding ostriches and fertile eggs, which was previously forbidden. Dairy farming also occurs throughout South Africa.

The volume of agricultural production has been erratic in the last decade primarily because of severe droughts. The country is, however, still self-sufficient as far as most primary foods are concerned, with the exception of wheat, oilseeds, rice, tea, and coffee.

Excellent article, can you please send me any agricualture related infomration on South Africa and the region. I am the Agricualtural Specialist at the U.S. Commercial Service South Africa.

this really helped me with my social project. thx i really apprecialte it.
3
azola mpolweni

Hi, am doing a projects on creation and management of relational database management system in agriculture in the university of south Africa and i need some information from you paraventure if we can work together.Thanks . I await your reply.
5
hafeez

do you have any articles that have info on, the move from agriculture to mining in south africa?
6
mzuyanda

rily helpd cz am duing a seminar on the contribution of maize industry in the economy of SA..i would appreciate more info...enx
7
letele

I would like to know how crop farming in South Africa is organised?
8
Jan Hendriks

I am a business adviser. Staying 2x per year with my son in law in Bloemfontein (a distributor of organic fertilizers) I am interested to assist Freestate farmers to export.
9
Zanamwe

I realised that persimmons are becoming a significant crop especially in western cape, do you have statistical data about this crop?
10
mpho

thanks guys this has helped alot with my bio project, aweh
13
Hugo Van Straten

Very interesting for my lessons. Where can I find some short film footage on Agriculture in South Africa, cocerning arable farming and animal farming
14
CHANDAN

JESUS CHRIST LOVES YOU. Great website! Thank you so much.
17
Nozipho Msimango

Where can I get data for South African agricultural or wine exports from 1960 on wards?

I studied agriculture in university and I moved to South Africa I don't know which state or city is useful for me I like to work in green house . is there any one help me
20
April Bradley

Hello, our company sells the Kinze brand (American) of soy and maize planters directly to commercial farmers. It is the second highest planter sold (1st being John Deere) in the U.S. and is gaining recognition overseas for its performance and quality. How could I reach large soy and Maize farmers in South Africa to offer this brand?
21
Luke