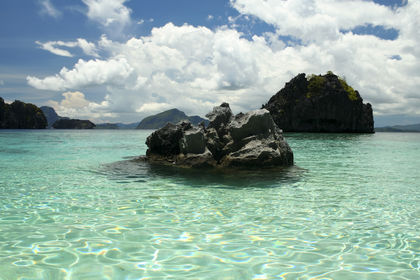 Republic of the Philippines

Made up of about 7,100 islands, the Philippines is on the southeastern rim of Asia and is bordered by the Philippine Sea on the east, the South China Sea on the west, the Luzon Strait on the north, and the Celebes Sea on the south. Its land area, which is slightly larger than that of Arizona, measures 300,000 square kilometers (115,830 square miles), and its coastline is 36,289 kilometers (22,550 miles). The capital, Manila, is on the island of Luzon in the highly urbanized National Capital Region, which is made up of 12 other urban areas including the cities of Mandaluyong, Marikina, Pasig, Quezon, Kalookan, Valenzuela, Las Piñas, Makati, Muntinlupa, Parañaque, and Pasay. The main financial district is in Makati City.

In January 2000, the U.S. Agency for International Development (USAID) warned of the serious consequences of the booming Philippine population. It predicted the population will double by 2030 based on its 1999 growth rate of 2.3 percent, giving the Philippines "the equivalent of 58 percent of the current population of the United States [living] on 3 percent of its land area," a situation with "grave consequences" for the Philippine economy, society, and the environment.

The country is divided into 3 island groups: Luzon, Visayas, and Mindanao, known together as Luzviminda. These 3 groups are further subdivided into 16 regions. The 2000 National Census lists 61 chartered cities and 73 provinces in the Philippines, with the most populated regions in Luzon. Four out of ten persons in the Philippines lives in the National Capital Region and the adjoining regions of Central Luzon and Southern Tagalog.

According to the 2001 Labor Force Survey, employment in the service sector rose to 13.2 million in 2000, up from 12.7 million in 1999. The proportion of workers in the Philippines service sector increased accordingly, from 45.8 percent to 46.8 percent.

The Philippines has a variety of retail establishments scattered throughout the country, from small village-based general stores that supply all the needs of a small community to a web of specialized stores in the larger cities. The wholesale and retail sector was affected by the economic slowdown in 1998, so retailers and wholesalers tried to increase consumer spending with aggressive marketing campaigns, quarterly sales, and discount promotions. In 1999 revenue rose to P145.41 billion from a low of P138.64 in 1998. Around this time, the retail sector was opened to foreign competition by the Retail Trade Liberalization Act, which allows foreign retailers to conduct business and fully own enterprises as long as they meet certain capitalization (available funds) requirements.

According to the Department of Tourism (DOT), which works with other government agencies to improve infrastructure and guarantee peace and order in the country, the Philippines was the twelfth ranked tourist destination in Asia in 1997. In Southeast Asia, the Philippines ranked fifth, behind Thailand, Singapore, Malaysia and Indonesia. In 1999, 2.17 million tourists visited the country, mostly from East Asia, followed by North America and Europe. These tourists spent $2.55 billion in the country. The country offers nearly 12,000 rooms in numerous hotels. To attract more tourists, as well as to encourage locals to travel to other areas of the country, the government implemented 5 major programs in 1999. Among these programs were the promotion of community-based tourism, the rehabilitation of the world-renowned Ifugao rice terraces, and the promotion of Manila as a multi-faceted destination. Also introduced were programs geared toward overseas workers and attracting expatriate (living abroad), third-and fourth-generation Filipinos to visit their homeland, and programs highlighting cultural artifacts and national heritage. The Philippines boasts some of the best scuba diving in the world, and its World War II sites are also major tourist attractions.

In the early 1990s, the monopoly of the Philippine Long Distance Telephone Company (PLDT) was abolished and the sector was opened to competition. Two telecommunications companies, Globe Communications and Smart Communications, are locked in battle over mobile-phone market share. By 1999, Globe was leading with 720,000 subscribers, but Smart followed closely behind. The call-center service business is thriving with the entry of foreign companies like America Online, Etelecare International, People Support, and Getronics. Although still in its infancy, the industry is expected to expand, aided by the availability of workers proficient in English, suitable facilities, and government incentives.

The growth and stability of the Philippine economy is dependent on foreign trade, particularly on the dollar revenue generated from export. For this reason, the Department of Trade and Industry (DTI) has established an Export Development Council to oversee the growth of this sector as guided by the Philippine Export Development Plan. The plan uses a comprehensive approach in promoting Philippine exports to world markets. Another organization that assists the DTI in export promotion is the Center for International Trade Exposition Missions (CITEM), which assists Filipino exporters in marketing and promoting their products through regular trade fairs, trade missions, and other export-promotion programs and activities at home and abroad.

The primary trading partners of the Philippines have always been the United States and Japan, both former colonizers. Trade with these 2 countries has accounted for 50 to 60 percent of Philippine exports for the last 10 years. The Philippines also trades with Singapore, the

Labor-intensive industrial manufacturers dominate the Philippine export scene. Electronics and semiconductors continue to lead the country's top-10 export products, generating US$1.74 billion in 1998 and US$2.16 billion in 1999. Officials of the Department of Science and Technology predict that earnings from electronic exports will reach US$4.7 billion by 2004. A 1997 government survey revealed that 75 percent of the 784 firms in the country's export-processing zones were electronics manufacturers, and that these firms account for 59 percent of the country's exports. Other important export products are machinery and transport equipment, garments and coconut products, furniture and fixtures, bananas, processed food and beverages, and textile yarns.

Trade officials have forecast that Philippine merchandise exports are likely to hit the US$50 billion mark by the end of 2001, up from $35 billion in 1999. Philippine foreign trade continues to increase every year. In 1998 and 1998, the Philippines posted positive export growth rates—16.9 percent and 18.8 percent—when those of other Asian countries were in decline.

Imports for 1999 were $30.7 billion. The country's top 10 imports are electronic components, telecommunications equipment and electrical machinery, mineral fuels and lubricants, industrial machinery and equipment, textile yarn and fabric, transport equipment, iron and steel, and organic and inorganic chemicals. The Philippines has attempted several strategies to correct the trade imbalance where imports exceed exports. These strategies range from exchange and import controls to raising tariffs for imported products. Despite these efforts, imports have continued to surpass exports for the last 30 years, except in 1973. This forces the government to borrow from international lending agencies to pay for the products that it imports, which are paid for in foreign currencies, commonly in U.S. dollars. These loans are compounded by interest, which further increases the national debt. Over the last 2 decades, this imbalance has been eased somewhat by the money sent by Filipinos working abroad to their families, estimated at US$6.8 million in 1999, a substantial rise over the US$4.5 million figure for 1998.

There are 5 types of banks in the Philippines: universal banks (also called "expanded commercial banks"), commercial banks, thrift banks, rural banks, and government-owned banks. Thrift banks, which include savings and mortgage banks, private development banks, and stock and savings associations, service mainly the consumer retail market and small- and medium-size enterprises. The rural banking system services the needs of the agricultural sector, farmers, and rural cooperatives. There are 3 fully government-owned banks: the Land Bank of the Philippines, the Development Bank of the Philippines, and the Al Amanah Islamic Investment Bank of the Philippines. The banking sector encountered great difficulty during the Asian financial crisis in 1997, but owing to past reforms, the financial condition of the Philippine banking system has been more stable compared to several of its neighboring countries, and major bank failures have been avoided.

The Manila Stock Exchange was established by American businessmen in 1927 after a gold boom. In order to protect its investors, the Securities and Exchange Commission (SEC) was set up in 1936, making it the oldest securities regulatory body in Asia. The Makati Stock Exchange was founded in 1956 by some Filipino brokers who felt dominated by the Americans. For many years, the 2 stock exchanges competed against each other for clients, but they merged in 1992 after a Supreme Court ruling. The newly merged stock exchanges commenced commercial operations in March 1994. Standard and Poor's estimated the market capitalization of the merged exchanges at US$48.105 million and trading value was at US$19.673 million.

Beginning in the 1980s, lack of employment opportunities and inflation at home caused many Filipinos to seek employment in Europe, the Middle East, and neighboring countries in Southeast Asia through legal and illegal means. According to labor statistics released in January 2001, a total of 789,000 documented OFWs left to work abroad from January to November 2000 as information technology workers, engineers, seafarers, housekeepers, and nurses, among others. As of December 2000 labor statistics released by the Inter-Agency Committee on Tourism and Overseas Employment Statistics reveal that there are 7,383,122 Filipino professionals working abroad. Money sent home by the OFWs in 1999 amounted to US$6.8 million, a big jump from US$4.5 million in 1998. The social costs of this phenomenon were also substantial, for it caused the breakdown of the family unit, carrying with it attendant problems such as extramarital affairs and increased delinquency among unsupervised children. An equally disturbing problem was the rampant sexual and physical abuse of OFWs, especially women, and those victimized by illegal recruiters.

WOMEN AND CHILDREN IN THE WORKFORCE.

On one hand, economic growth has opened up more opportunities for women, particularly in export industries; on the other hand, women are first to be terminated when industries are forced to downsize. Since the Asian financial crisis in 1997, women have been forced to seek additional sources of income to supplement their meager take-home pay and are thus working longer hours than men. A 1998 study revealed that the number of women employed in the manufacturing sector had decreased by 12 percent, while those engaged in mining and quarrying increased by more than 16 percent.

A government agency, the National Commission on the Role of Filipino Women (NCRFW), is mandated to conduct gender consciousness-raising programs among government policymakers, planners, implementers, women in government, and non-government institutions. Through its initiative, the Philippine Development Plan for Women was formulated and adopted by the government. Another agency, the Bureau of Women and Young Workers, a subordinate agency of the Department of Labor and Employment, looks after the interests of working women and children. There are laws in place protecting women from gender discrimination and sexual harassment and establishing community day-care centers for children, but the implementation of these laws is not always strictly monitored.

Philippines has no territories or colonies.

Panganiban, Artemio V. "An Introduction to the SupremeCourt." Law. Vol. XXIV, No. 8, Integrated Bar of the Philippines, 1998.

There are of good places to visit here in the Philippines; Beaches, Historical Places and more!