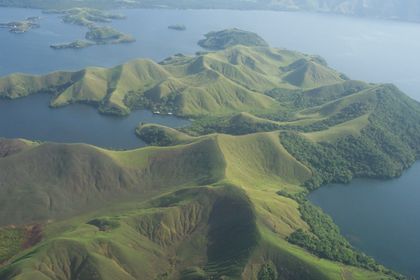 Papua New Guinea has perhaps the world's most diverse population, with at least 846 indigenous languages spoken. The population is almost entirely indigenous Melanesian, with small numbers of European and Asian immigrants. The population was estimated at 4.7 million in 2000. The growth rate of the population was estimated at 2.3 percent in the same year. Although the overall population density of Papua New Guinea remains low, there are great differences between regions. In general, the low-lying, coastal parts of the country have fairly low population densities, while the mountain valleys, or "highlands," have much greater population densities. For example, the Western Province averages only 1 person per square kilometer (2.6 per square mile), while parts of the highlands average up to 100 people per square kilometer (260 per square mile).

Papua New Guinea has few large cities. The largest is the capital, Port Moresby, with a population over 400,000. The most serious population issue facing the country is the migration of rural residents to the cities, especially to Port Moresby and to the second largest city, Lae. Many of these migrants are unable to find jobs, leading to crime and other social problems. The Papua New Guinea government has sought ways to control population growth but faces an uphill battle.

Since the 1970s the mining of rich mineral deposits has dominated the Papua New Guinea economy. In contrast to the agricultural sector, mining in Papua New Guinea is characterized by large and highly mechanized operations. Copper, gold, and crude oil are the key income earners for the country.

In 1970 mineral exports were a mere 1 percent of total exports. Within 2 years, this figure had risen to 55 percent. By the start of the 1990s the contribution of the mining sector to total exports had continued to rise, reaching 70 percent. The large Panguna mine on the island of Bougainville opened in 1972, and until its closure in 1989 was one of the largest copper mines in the world. The shutdown of the mine was due to what many people have charged was environmental havoc created by the mine. It also became a flashpoint for resentment against the Papua New Guinean government by the indigenous people on Bougainville.

Since the closure of the Panguna mine, gold has been the main mineral export earner for the country, with a peak contribution to export value of 50.9 percent in 1991. In 1994, gold was contributing 26.4 percent of the value of total exports, equal to crude oil as the dominant export earner. Gold is mined at Porgera in the highlands and at several other locations, and in 1997 a new gold mine on Lihir Island opened. The Lihir mine reserves are estimated to be 103.4 million tons of ore, with a mine life of approximately 37 years, making it one of the world's largest gold reserves.

The Ok Tedi copper mine near the border with Indonesia has in some respects replaced production from the closed Panguna mine. Ok Tedi is expected to operate for about 10 more years, though because of a lawsuit resulting from environmental damage caused by mining, the main operating company, Broken Hill Proprietary (BHP), would like to close the mine earlier, against the wishes of the Papua New Guinea government.

The Papua New Guinea government uses tariffs and subsidies , as well as direct industry support, to keep this sector afloat. While the industry has become dependent upon such measures, the government sees the manufacturing sector as providing employment for the increasing number of urban migrants. Most manufacturing is for domestic consumption only, and does not generate any export earnings.

Papua New Guinea has no territories or colonies.

I LIKE TO KNOW MORE ABOUT MY COUNTRY'S PROGRESSIVENESS CONCERNING SOCIAL,ECONOMIC, POLITICAL AND CULTURAL ASPECTS AND SINCE PAPUA NEW IS ON THIS SITE IT GIVES ME AN OPPORTUNITY TO FREELY ACCESS AND ACQUIRE AS MUOH AS I CAN.AS A STUDENT I THINK IT GIVES A WONDERFUL OPPORTUNITY FOR ME TO DO MY RSEARCHES WITHOUT ACTUALLY RUNNING ALL AROUND THE PLACE. I BELIVE THIS SITE WILL CREATE MANY PRODUCTIVE SCHOLARS THROUGH THE MATERIALS IT PROVIDE TO ENHANCE THEIR KNOWLEDGE
2
Ajay

Can you provide me with information and data regarding the issues of over population in the area of one Port Moresby.