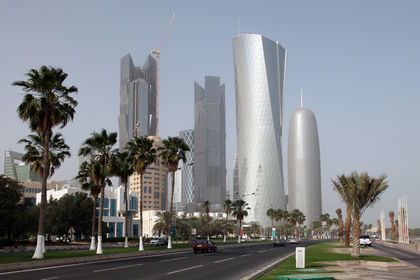 Qatar is a tiny peninsula jutting into the Persian Gulf and bordering only Saudi Arabia. With an area of 11,437 square kilometers (4,416 square miles) and a short coastline of 563 kilometers (345 miles), Qatar is slightly smaller than the state of Connecticut. Qatar's capital city, Doha, is located in the east on the Persian Gulf and is home to 320,000 people. Other major cities include Umm Sa'id and al-Khawr.

The population of Qatar was estimated at 769,152 in July of 2001, a marked increase from the 1990 population of about 486,000. Arabs make up 40 percent of the population, but there are also Pakistanis (18 percent), Indians (18 percent), Iranians (10 percent). Non-Qataris make up the largest proportion of the country's labor force . Since 1998, the population growth has slowed down, as evidenced in the 5.3 percent drop in the population in 1998. The slowdown is believed to come as a result of the government's "Qatarizing" movement—to encourage the employment of local workers—following the sharp decline in oil prices in 1997 and 1998.

Qatar's population growth has accelerated since the 1960s, mainly as the result of the influx of large numbers of expatriate workers into the country. Between the late 1960s and 1997, the population grew from 70,000 to 522,000, of whom only 160,000 are Qatari nationals. According to the Economist Intelligence Unit (EIU) Country Profile for 2000, the population growth rate reached 1.5 percent in 1999, and is projected to reach 1.8 percent in the coming decade. The expatriate worker community, which accounts for 70 percent of the population, is largely made up of Indians and Pakistanis.

Qatar's economy is heavily dependent on oil. Oil accounts for 40 percent of GDP and 63 percent of the state's income. The Qatar General Petroleum Corporation estimates that Qatar's total oil reserves have reached 12.2 billion barrels, up from 3.7 billion in 1995, due to the exploration of new oil fields by western companies since 1990. Oil production has risen consistently since 1994. Average production reached 854,000 barrels a day in May 2000, up from 410,000 barrels a day in 1994. Despite the increased production levels, Qatar's output is relatively low by regional standards.

In addition to oil, Qatar has been a producer and exporter of natural gas since 1980, when the first liquefied natural gas (LNG) plant was opened. Altogether, there are 3 LNG plants in the country, and a fourth is being constructed. The first plant was opened in 1980, producing up to 1,284 tons a day of propane, 851 tons a day of butane, 588 tons a day of condensate, and 1,350 tons a day of ethane-rich gas. A second LNG factory was opened in 1982, and it also produces large quantities of propane, butane, condensate, and other gases. The third LNG project was completed at Ras Laffan in 1992 as the first phase of the North Field Project. According to the EIU, the plant produces some 22.6 million cubic meters a day of gas and around 50,000 barrels a day of condensates. A fourth project, phase two of the Ras Laffan North Field project, is being constructed in 2001 to produce ethylene and polyethylene for use as feedstock (raw materials used for chemical and biological processes) by Qatar Chemical Complex. The project also aims to export 22 million cubic meters of gas a day to neighboring Persian Gulf states. LNG products are mostly exported to generate foreign exchange but are also used as feedstock for the emerging petrochemical industry.

Qatar's non-oil industrial base is relatively small. However, the contribution of the nonoil manufacturing sector to the economy has increased steadily since the 1970s, in large part thanks to the huge investments and efforts by the country to build a non-oil industrial base. Since 1992, the government has moved to establish the Ministry of Energy and Industry to encourage industrialization and to set up the Qatar Industrial Development Bank to provide loans with easy terms to would-be investors. In 2001, Qatar enacted a law allowing foreign companies a 100-percent ownership of projects in some sectors, including education, tourism, and health care. Despite these efforts, however, industrial output remains low. The sector's contribution to GDP reached 8.8 percent in 1999.

Qatar's industrial base is dominated by the petro-chemicals sector, which is controlled by the government. It is the biggest producer of low-density polyethylene and chemical fertilizers in the world. The sector has traditionally accounted for 40 percent of GDP. However, since 1998, the sector's contribution to GDP has been affected by the economic slowdown in Asia, the primary market for Qatar's oil products. Efforts are underway in 2001 to set up new petrochemical ventures that are expected to resume exports once the economic slump affecting Asia is over. In addition to petrochemicals, there is a small steel production operated by the 100-percent state-owned Qatar Steel Company. The sector produces 500,000 metric tons a year. Since 1998, the government has attempted to privatize the company by selling 49 percent of its shares on the Doha Securities Market to improve its profitability and as part of an overall scheme to reform the economy. The government, however, was forced to delay the partial privatization of the company as a result of the poor performance of the Doha Securities Market since 1998, which meant that the company's shares will be sold for much less than the government had hoped for.

Tourism is a very negligible contributor to Qatar's economy. Since 1996, the government has attempted to establish a tourism industry and to turn Qatar into a major destination for international sporting events. The government has, as a result, invested heavily in the construction sector. These efforts came to a halt in the wake of the 1998 spending cuts, which were prompted by the sharp fall in world oil prices, but were revived in the 2001 budget, as oil prices rose again in 2000.

Qatar has a fledgling financial sector regulated by the Central Bank of Qatar. There are 14 banks operating in the country, including 5 locally-owned banks that hold 80 percent of the financial sector's assets. There are also 16 currency exchange companies. There are no investment banks. The Qatar National Bank, the country's largest bank, is the only bank involved in the government's hydrocarbon development program, and handles all the government's business. Other banks include the Qatar International Islamic Bank, Doha Bank, and the Commercial Bank of Qatar.

The government introduced new regulations in August 1995 to ease earlier restrictions placed on financial transactions. Despite these efforts, some restrictions continue to affect interest rates paid by banks on deposit accounts. Although the Central Bank requires banks to disclose accounts according to international standards, there is growing concern that some banks do not disclose their non-performing loans .

The Doha Securities Market (DSM) was established in 1997 with QR21 billion (US$5.8 billion) in assets. Nineteen companies are listed on the DSM, but trading has been generally weak, resulting in a 0.5 percent drop in the stock market index at the end of 1999.

Lacking many large commercial centers other than Doha and its suburbs, Qatar has a relatively undeveloped retail sector. While Doha is home to a variety of retail stores, including fast food franchises such as Mc-Donald's, the majority of towns in the interior of the country have small family-owned shops, farmer's markets, and temporary roadside stands.

The value of the Qatari riyal has remained stable since it was first issued in 1969. The majority of Qatar's exports are denominated by the U.S. dollar. The Central Bank of Qatar has kept a fixed exchange rate of QR3.64: US$1, despite a fall in the value of the dollar in 1995, mainly to prevent inflation .

Qatar has no territories or colonies.