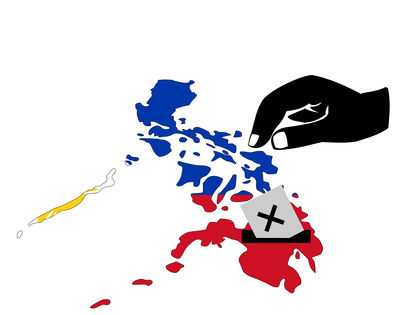 The government of the Republic of the Philippines is composed of 3 equal branches: the executive, legislative, and judicial, with checks and balances on each other.

The popularly elected president is the nation's highest executive official. The legislature is divided into 2 chambers, a Senate (upper chamber) of 24 members and a House of Representatives (lower chamber) of a maximum of 260 members. The Supreme Court, led by the Chief Justice and 14 associate justices, is the highest judicial body, and acts as the final arbiter of the legal validity of any executive or legislative policy. In 1991 a Local Government Code was enacted that transferred some of national government powers to local government officials. Administratively, the country is divided into political subdivisions such as provinces, cities, municipalities, and barangays (villages). Each political subdivision has its own local government, which enjoys a certain level of autonomy (self-governance) and is legally entitled to an equitable share of the national wealth called the Internal Revenue Allotment.

The country practices a multi-party system. Political parties are required to register with the Commission on Elections (COMELEC) to which they must present a constitution, by-laws, and platform. In practice, parties in the Philippines are very weak and merely exist to host individual political ambitions. Hence, it is not unusual for new political parties to crop up just weeks before election time and dissolve after the elections, with winning candidates merely transferring to the dominant party.

Elections in the Philippines are often swayed by patronage (support given by a moneyed or influential individual) and the personality of the candidate. In fact, it is unusual for candidates to discuss their platforms during campaign rallies since many of those who attend such rallies are usually more interested in watching the entertainers that accompany these candidates than the candidates themselves. In 2001, after the ouster of former president Joseph Estrada, formerly a well-known movie star, reformers called for an end to personality-oriented elections and for campaigns built around a relevant discussion of national issues.

The military plays a significant role in the economy by ensuring peace and order in the country, particularly in Mindanao, southern Philippines, where a long-term war against rebels continues to be waged. In special instances, military personnel are partnered with police personnel to patrol the cities and minimize urban crime. The navy also guards the country's coastal borders against poachers and illegal fishing vessels, which deplete the country's coastal resources.

The policies and programs of government are funded by various taxes imposed at the national and local levels, and by borrowing. Taxes are collected by the Bureau of Internal Revenue and the Bureau of Customs. Domestic corporations, resident citizens, and resident aliens are taxed on their net income from all sources, worldwide, while resident foreign corporations are taxed on their Philippine net income. Government also generates funds from other offices, such as the Land Transportation Office, which collect taxes for specific government services. Other sources of revenue are derived from the sale of government corporations to the private sector , fees and service incomes of various government agencies, foreign grants, and proceeds from the sale of transferred, surrendered, and privatized assets.

Revenue earned by government is usually inadequate to finance its programs and activities. Bernardo Villegas, an economist at the University of Asia and the Pacific, explains that for a developing country like the Philippines to remedy this situation, the government must resort to borrowing money either from external or domestic sources, such as via treasury bills , notes, and bonds issued as collateral (property pledged by a borrower to guarantee the investment of a lender) for domestic loans. Foreign sources are used because there is no adequate, long-term source of capital in the country, a situation that is made worse by the country's low savings rate. Funds borrowed abroad are readily available and come with lower interest rates. International lending institutions such as the Asian Development Bank, the International Monetary Fund, and the Japan Bank for International Cooperation are some of the country's foreign creditors. Borrowing has increased the national debt to P2.1 trillion. Domestic debt at the end of 1999 reached P986.7 billion, while foreign debt stood at US$52.2 billion.

In the past, the government has played an active role in influencing the country's economy, often to the displeasure of the business sector, which wants the economy left to market forces with minimal government intervention. Like many developing countries, the Philippines' economic policies include import substitution policies and the promotion of labor-intensive industries to support a burgeoning workforce. The government also exerts control over the economy through the regulation or prohibition of monopolies , the sourcing and formation of capital, the provision of private incentives, and through the regulation of strategic sectors that are vital to national interests.

Government in developing countries, such as the Philippines, must take charge of building strategic infrastructure, such as farm-to-market roads and bridges linking landlocked areas, to stimulate the exchange of goods and services between localities. It is also the govern-ment's function to protect natural resources from illegal exploitation.

this articles really give me the answer of my question...thanks
2
Gerry Duwin A. Dela Zerna

This article will help me with my paper on educational legislation.
Thanks!