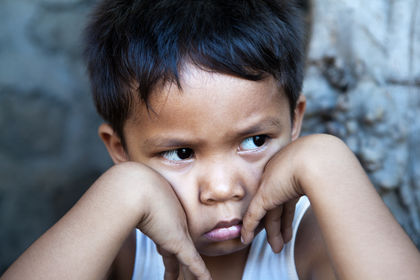 Poverty remains a serious problem in the Philippines, which is the only populous country in East Asia in which the absolute number of people living on less than $1 a day remained constant over the 1981-1995 period, according to figures compiled by the World Bank. That body estimates that even if the Philippine economy posts a 6 to 8 percent growth through 2005, it will still not be possible to bring the poverty level below 15 percent. Economists believe that it may take some 20 years of continuous economic reforms and implementation of social programs before the country can match the single-digit poverty figures of its more wealthy neighbors. In general, widespread poverty in the country is a direct result

of inappropriate and unresponsive economic policies, mismanagement of resources, corruption, and failure of the government to implement anti-poverty programs.

Economic policies from the 1960s to the 1980s focused on a capital-intensive, import-substituting strategy, which bred inefficient industries and contributed to the neglect of the agricultural sector. Policies promoting industrialization favored the development of urban areas to the detriment of rural areas, most of which remained underdeveloped. At the outset, urban areas, especially Metro Manila, cornered major infrastructure and social projects, thereby attracting most of the investments and jobs in the manufacturing and industrial sectors. In contrast, living standards in the rural areas continued to decline, leaving most of the peasant communities to subsist on a hand-to-mouth existence.

Starting in the mid-1980s, policies adopted by the government moved toward a more open, market-friendly economy. However, as government continued to pursue industrialization, the country's foreign debt ballooned and most of the government's resources went for debt and interest payments. This greatly hindered the govern-ment's ability to finance infrastructure and social programs for the neglected sectors of the population.

The mid-1990s witnessed a significant increase in income inequality. Only the top 10 percent of the population increased its share of total income, while the remaining 90

percent lost income share. A 1997 government survey revealed that more than a third of the population (36.7 percent) lived below acceptable standards. Still, the incidence of extreme poverty had declined since 1985, when the comparable figure was 49.2 percent. In 1999, the National Statistics Office estimated that, of the 14.7 million families in the Philippines, the top 20 percent earned 14 times more (P502.1 billion) than the lowest 20 percent (P35.8 billion).

A survey by the National Statistics Office of income distribution in the period from 1991 to 1997 shows the combined earnings of 80 percent of Filipino families amounted to only 44 percent of total income in the country, while the top 10 percent of families owned 39.3 percent. In 1999, almost half (46.6 percent) of the total income, or P417.9 billion, came from wages and salaries, and about a quarter (23.5 percent), or P210.3 billion, from entrepreneurial activities.

Among the poorest Filipinos, most family income is derived from entrepreneurial activities such as selling food on street corners or collecting recyclable materials to sell at the junkyards. Those belonging to the higher income strata obtain a bigger share of their incomes from wages and salaries. Most of the poor are lowland landless agricultural workers, lowland small farm owners and cultivators, industrial wage laborers, hawkers , micro-entrepreneurs, and scavengers. Most poor Filipinos live in rural areas, where they are subject to the low productivity of agricultural employment. Urban poverty is caused by low household incomes and the internal migration of poor rural families to urban areas.

Due to inadequate access to community health centers, members of poor households are not able to maximize health services benefits, such as family planning, the lack of which results in larger families with more mal-nourished and uneducated children. The condition of the poor is made worse by lack of housing, clean water and electricity, especially in the urban areas.

In 1987 Congress enacted the Cooperative Code of the Philippines in order to improve income opportunities, promote self-reliance, and encourage the entrepreneurial spirit in the countryside. As of December 2000, there were 57,470 cooperatives (a collective organization owned and operated by the people drawing benefits from it) registered with the Cooperative Development Authority. In 1991, Congress enacted the Local Government Code, which expanded basic social services on the grass-roots level. The Social Reform Agenda (1993), formulated during the Ramos administration, is one of the government's most comprehensive development frameworks for combating poverty; its strategies aim at improving access to basic social services, increasing opportunities for employment, income generation, and self-reliance. The Estrada administration established the National Anti-Poverty Commission and allocated P2.5 billion for suitable programs.

what are the other ways of poverty please give me are some many example of poverty in the philippines.
2
cy-jay

what is the status of the philippines about unjust distribution of wealth and income?
3
iris

Are there a certain kind of program implemented at least to lessen the burden of poverty in the Philippines? I'm just up to know whether people can really feel that there's something made for their welfare as well :D thank you!
4
danny

Could the government of the philippines can provide housing for the poor, living in squatter areas?
Do philippines have their own cattles industries, to provide milk and meat? As I have seen in our society there are still millions of mal-nuorish children , because their parents cannot afford the price of the milk.
Maybe the basic and fundamental project of the government is to build more food industries such as cattles industry, piggeries,poultries etc. so that the consumers(filipinos) can afford the price.
5
danny

Could the government of the philippines can provide housing for the poor, living in squatter areas?
Do philippines have their own cattles industries, to provide milk and meat? As I have seen in our society there are still millions of mal-nuorish children , because their parents cannot afford the price of the milk,which is so necessary and important to the children for there fundamental health.
Maybe the basic and fundamental project of the government is to build more food industries such as cattles industry, piggeries,poultries etc. so that the consumers(filipinos) can afford the price.
6
manuel

if there is no corrupt government official in our country(philippines) we can overcome the poverty..and they are not really sincere to have a program to help people like cattle industry,piggeries,poultries, food industries because 95 % gov. ofiicials protect thier own personal interest
7
hamako

The dairy cow problem is not just administrative. Dairy cows cannot stand the heat in the Philippines and produce only a tiny fraction of the milk as in milder climates (Europe about 10,000 liters per Holstein cow and year). The solution for "air conditioning" the cows energy efficiently is there, but investments are substantial.
8
akimoto

Highly outdated information as of 2018. Is there no update to show the surging rise of the Philippine middle class, and threshold transition into an upper medium economy, as reported by the World Economic Forum, Forbes and IMF?