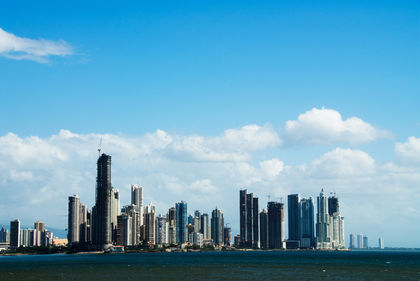 Panama is located in Central America between Costa Rica to the north and Colombia to the south. It is at the southern end of the Central American isthmus (a narrow piece of land that connects two larger land areas) and forms the land bridge between North and South America. The nation is S-shaped and runs from east to west with a length of 772 kilometers (480 miles) and a width that varies from 60 to 177 kilometers (37 to 110 miles). Panama has an area of 77,381 square kilometers (29,762 square miles) which makes it slightly smaller than South Carolina. This area consists of 75,990 square kilometers (29,340 square miles) of land and 2,210 square kilometers (853 square miles) of water. The nation borders the Caribbean Sea on one coast and the Pacific Ocean on the other. The 80-kilometer (50-mile) Panama Canal cuts the nation in half and joins the Atlantic and Pacific Oceans. The combined coastlines of Panama are 2,857 kilometers (1,786 miles) long. The nation's border with Costa Rica is 330 kilometers (205 miles), and its border with Colombia is 225 kilometers (140 miles) in length. Panama's capital and largest city, Panama City, with a population of 827,828, is located on the Pacific coastline of the country. The second largest city is Colón, located on the Atlantic coast. Colón has a population of 140,908.

The population of Panama was calculated to be 2,808,268 according to a July 2000 estimate. The country's population growth rate was 1.34 percent in 2000. The Panamanian population is growing rapidly. In 1970, the nation's population was approximately 1.5 million, but by 1990, the population had grown to about 2.2 million. Current estimates have the population expanding to 3.2 million by 2010. There were 19.53 births per 1,000 people, and the Panamanian fertility rate was 2.32 children born per woman. The nation's mortality rate was 4.95 deaths per 1,000 people. Panama has a high infant mortality rate due to the rudimentary health-care system and high incidence of poverty. In 2000, there were 20.8 deaths per 1,000 live births. The country has a high emigration rate and in 2000, 1.16 out of every 1,000 Panamanians emigrated to other nations. Emigration is frequent because of the lure of higher-paying jobs in places such as the United States (the main destination for Panamanian emigrants). Life expectancy in Panama is 72.74 years for males and 78.31 years for females.

population face discrimination in employment, housing, and politics. The culture and society of Panama is mainly Spanish-Caribbean. Spanish is the official language, but much of the population also speaks English. This is especially true of West Indian descendants. English is also commonly used in business. Almost 85 percent of the population is Roman Catholic; the remaining 15 percent are Protestant.

The majority of the population is urban; almost 60 percent of people live in towns or cities, especially in the metropolitan areas around Panama City and Colón. About 50 percent of Panamanians live in the corridor that runs from Colón on the Caribbean Coast to Panama City on the Pacific. Only about 25 percent of the land is inhabited. The nation has a population density of 36.6 per square kilometer, compared to that of the United States which is 28.4 per square kilometer.

After the privatization of 2 of the nation's main sugar mills, production increased 13.1 percent in 1999 and is now worth US$25.5 million. However, the refining industry suffers from excess production of at least 15,000 metric tons per year. As a result, many mills are closing, and some producers have begun shipping raw sugar overseas for processing and then re-importing the refined sugar. The government has also sold an orange processing plant to private investors for US$5 million.

The U.S. company Texaco operates an oil refinery in Panama that has a capacity of 60,000 barrels per day. The refinery provides all of the nation's gasoline and a majority of its fuel oil. In addition, about 8,000 barrels of refined petroleum are exported from the refinery. There are plans to implement a US$400 million project to build a pipeline from Colombia which will bring substantial natural gas into Panama and reduce the nation's dependency on oil. The government is engaged in negotiations with other Central American nations to join their electrical grids which would increase the nation's electricity exports.

In 1999, there were 82 licensed banks in Panama with assets of US$37 billion. This number included a number of foreign firms such as Citibank, Chase and Bank Boston. Panama has endeavored to establish itself as an international banking center, but instability and economic problems have impaired this effort. The total number of banks has declined from a high of 104 in the mid-1990s, and total assets declined by US$400 million in 2000. Foreign businesses may incorporate in Panama for the small sum of US$200. Doing so provides a way to escape high corporate taxes in certain countries. In 2000, there were over 400,000 companies incorporated in Panama.

During the 1990s, tourism experienced strong growth. However, much of the tourist trade was based on visits by relatives of U.S. military personnel to the country and concurrently, tourist trips within Panama by U.S. troops and their dependents. In 2000, the number of foreign visitors who stayed overnight had declined to 300,000 from a peak of 420,000. Nonetheless, foreign and domestic tourism is worth US$300 million annually. Each year, 276 cruise ships shop in Panama. In order to promote tourism, the government exempts all new tourist businesses from income and real estate taxes . The government plans to use many of the former U.S. Army facilities as tourist areas, including Fort Amador which already has extensive golf courses, boating facilities and buildings which can be converted into hotel space. The area is also home to the Smithsonian Institute for Tropical Research laboratories.

The form of tourism that is expected to experience the most dramatic growth is ecotourism . Panama has the most comprehensive wildlife management systems in Central America. About 29 percent of the nation's territory is protected by a series of 15 national parks, wildlife refuges and reserves. Panama has over 10,000 varieties of plants and at least 933 bird species (more than the total of Europe and North America combined).

On average, 50 ships per day travel the Panama Canal. In 1999, there was a total of 14,336 ship crossings of the canal. The largest commodity that is shipped through the canal is grain. However, the canal is a major shipping route for oil, the number-two commodity in volume (17 percent of total volume). Each day, approximately 600,000 barrels of oil are shipped through the canal. A large amount of coal is also transshipped. Coal accounts for 6 percent of total volume. That same year, the canal generated US$569 million in tolls and an additional US$50 million in revenues for the government. About 10,000 people work for the Panama Canal Authority, the company that oversees the operations of the canal.

A special, but distinct, part of the service sector is the Colón Free Trade Zone (CFTZ). This area was established in 1948 at the Atlantic entrance of the Panama Canal. The CFTZ is a trans-shipment area where foreign companies import products to be re-exported to other nations. In 1999, the CFTZ received US$4.9 billion in imports of which US$4 billion were re-exported. Most exports are sent to Latin America. The largest exports to the CFTZ were Hong Kong (27 percent), Japan (13 percent), the United States (11 percent), South Korea (10 percent), and Taiwan (8 percent). The majority of exports went to Colombia (27 percent), Ecuador (9 percent), Panama (6 percent), and both Venezuela and the United States (5 percent each). These figures are not included in the overall trade statistics for the nation. The products that were imported to or exported from the CFTZ included electronics (22 percent), apparel (17 percent), textiles (7 percent), footwear (5 percent), and jewelry (5 percent). The Panamanian government received US$899 million in revenues from the CFTZ in 1999.

Panama has no territories or colonies.

Zimbalist, Andrew, and John Weeks. Panama at the Crossroads: Economic Development and Political Change in the Twentieth Century. Berkeley: University of California Press, 1991.

Balboa (B). One balboa equals 100 centésimos. Panama only issues coins in denominations of 5, 10, 25, and 50 centésimos and 1 and 5 balboas. The U.S. dollar is distributed freely throughout the country and is legal tender.

I think that this website is the best website that there is. I am in 7th grade and I have to do this project about Panama for our culture fair. So far, this is one of the websites that helped me the most because it has so much. Thank you for making this website.
2
Jordan

I think that this website is really helpful in my powerpoint report that I chose for my spanish class. I am in the 10th grade and it can be pretty confusing at times. I chose panama because I have watched a show about it called MAN VS WILD on the discovery channel. I already knew a little about it so I chose to do the report on it to learn more.

Respond if you agree with me.
3
Ivana

This website was supper efficient for my project in world history. It help me learn more on what Panama is all about. The reason i choose Panama for my powerpoint report is because my mom is from Panama making me half Panaminian so I wanted to learn more about the Country.
4
Carmella

This is so helpful! Thanks! This has helped me so much
5
Maddeline

Hey this site helped me on my Panama Research report. I am i 6th grade. I need a name of the person who made this site to give you credit in my biblyography. If I don't get 1 by Friday, May 14, 2010, Don't worry because the credit will go to No info. Thank You,
P.S. can I get the name of the sites you searched so I can glance at them. I will give you credit for the info if i get your name.
6
Melissa

Tells me all the facts i needed for my Panama project. (thank you so much.)
7
Jaden

This website helped me a ton for my research project on Panama. We had to research a Central/South American country, and for Panama information, this website was great. It really helped. I told my class about this website, and I heard a couple of my classmates went on here. Thanks again. (If anyone cares, I'm 12 years old :P)
8
AwesomeSauce

Nice site. All the info in one place is real helpful.
9
jilma francis

This website truly helps those who like me lack info on Panama. The person who took the time to research about Panama is commendable. Thanks again, and keep up the good work.
10
DeAngelo Binford

THANKS YOU GUYS I REALLY NEEDED THE INFORMATION AND THIS WEBSITE WAS AWSOME !!! THANKS FOR THE HELP
11
tank u

thank you so much, i really appreciate this info :-D
12
colin

Thanks sooo much! im doing research on Panama and this gave me SOOO much info
15
Charles Edwards

thanks for a verry intristing insight into this aspecp of history.
16
Kylie Dempsey

Thank you so much! I appreciate this website. It helped me a lot for my Social Studies Project on the Panama Canal! Btw, Im in 6th grade and im 12 yrs. old! If anyone in the 6th grade from Harpers Ferry Middle School and is in Mr. Banas's class(NOT BANANAS), this website will help a lot. anyway thnx a lot!
17
Hannah B.

This website is really useful! This helped me do my project on Panama, Panama for history class. :3 And if your wondering, I’m 11 years old in the sixth grade :P If ur in Snelson Golden Middle school, this will help you! Bye for now! And yes, I’m Panamanian!