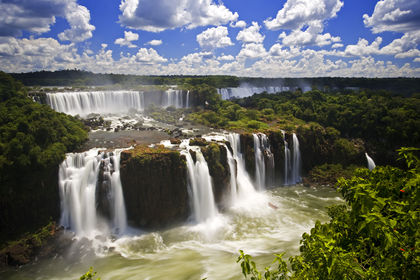 Paraguay is located in the center of the southern half of South America, northeast of Argentina. It is also bordered by Bolivia to the northwest and Brazil to the east. With an area of 406,750 square kilometers (157,046 square miles), Paraguay is almost as large as the state of California. Asunción, the nation's capital, is situated on the easternmost point of the Argentine border, just south of the center of Paraguay. The nation is landlocked, which sets it apart from virtually all of Latin America, and could be seen as a detriment to the nation's economy. Major cities that provide river ports, such as Asunción, Villeta, and Encarnación (both to the south of Asunción), help to alleviate the economic consequences of the nation's lack of coastline. Ciudad del Este, a commercial center on the Parana River, is another important city to the east of the capital. Paraguay's Argentine border to the southwest measures 1,880 kilometers (1,168 miles), its Bolivian border is 750 kilometers (466 miles), and the Brazilian border is 1,290 kilometers (802 miles).

Migration to the urban areas of Paraguay is common, but more than half of the nation's population still lives in rural areas, mostly in the east. Only about 5 percent of the population lives west of the Paraguay River. High rates of emigration from 1950 to 2000 have contributed to the large percentage (40 percent) of Paraguayans living outside their country and help to alleviate the high growth rate. Many Paraguayans have historically emigrated to Argentina, particularly during and after the Chaco War of 1936 and the Civil War of 1947, and also during the 1950s and 1970s. Paraguay has one of the world's lowest population densities. The nation's most densely populated area is Asunción and its surroundings.

The Colorado Party's clientelistic agrarian reform (giving unused land outside of Asunción to the party's supporters in exchange for political favors or funding) of the 1960s helped to alleviate overcrowding in the capital by drawing peasant labor into previously unused territory. However, the effects were not lasting and overcrowding is still a problem today.

One of the most surprising features of the Paraguayan population is its high literacy rate of more than 92 percent despite its poorly-developed education system. School is mandatory only between the ages of 7 and 13 and this requirement is not well enforced. There are insufficient numbers of primary and secondary schools and severe shortages of educational resources, especially in rural areas. The shortage is worst at the secondary level. There are only 2 universities, vocational schools are concentrated in the main cities, and there is a severe shortage of teaching resources throughout the nation.

Paraguay's energy industry has thrived on its hydroelectric potential. Hydroelectric power replaced thermo power (power from burning wood and oil) around 1970. In 1968, Asunción's Acary hydroelectricity plant began operating, and in 1973 Paraguay and Brazil together built the US$20 billion Itaipu plant by the Parana River. This joint venture made history as Brazil bore most of the cost and Paraguayan electricity production grew 15-fold from 1970 to 1990. Initial arrangements that benefited

Brazil were later modified in 1985 to ensure that Paraguay received fair compensation. Paraguay also built a dam on the Parana to create a reservoir that spans a total of 870 miles in Paraguay and Brazil. The 1990s were marked by Paraguay's joint venture with Argentina to build a hydroelectric power plant on a chain of islands in the Parana. Combined, Paraguay's ventures in hydro-electric power have ensured that the nation will become one of the world's top producers of hydroelectric power in the 21st century.

In 1999, Paraguay generated 51.554 billion kilowatt hours (bkwh) per year, but only consumed 1.915 bkwh that year. In 1999, Paraguay sold 46.03 bkwh of power for export, primarily to Brazil and Argentina, making power a large source of export earnings. Itaípu's earnings reached a record US$420 million in 1998 (equal to 15 percent of all exports) and Brazil purchased 97 percent of the plant's power. Several plans (including joint ventures with Argentina and Brazil) are being developed for expanding existing hydroelectric power plants and constructing new ones in the coming decade.

In the late 1970s and early 1980s, construction grew rapidly, with a drastic rise in hydroelectric dam and power plant projects, infrastructure projects, and housing development in Asunción. The construction industry's resources were primarily found locally: lime, sand, wood, and stones. Since the mid 1980s, however, construction has fluctuated dramatically as old hydro-electric power plants and infrastructure projects were completed and then new projects were begun.

In response to a growing construction industry, the nation has invested large sums of money in expanding and modernizing the production of cement, metal, and steel. The government completed a US$200 million expansion of its largest cement plant, at Vallemi, in 1986. The plant had previously used outdated production techniques and had been operating well under capacity. This expansion was financed by French banks, but ended up burdening the economy since it still operated well below capacity and was over 500 kilometers outside of Asunción, far from most industrial activity. The government also owned Acepar, the largest steel plant, in the 1980s. Acepar alone is capable of producing 5 times the amount of steel Paraguay uses each year, and there are other large steel producers in the nation as well. Unfortunately, most development in construction-related industries like cement and steel took place after most of the nation's biggest hydroelectric and infrastructure projects. However, similar projects in the late 1990s and early 2000s are capitalizing on these industries.

Manufacturing of steel, cement, plastic, and wood products has risen since the late 1970s due to construction projects (hydroelectric power plants, infrastructure, and urban housing). Fully manufactured exports account for only 5 percent of all exports, but semi-processed agricultural goods make up 72 percent of all exports. Still, manufacturing is underdeveloped in Paraguay, and is characterized by many small-or medium-sized firms. The few larger firms are primarily foreign owned, and few companies operate at full capacity. Food, beverages, and tobacco have formed the largest manufacturing subsector; agriculture and lumber manufactures form the second-largest subsector; and textiles, clothing, leather, and shoes form the third.

Paraguay also has a small, undeveloped mining industry, concentrated along the Paraguay River where most mineral deposits have been found. Gypsum, limestone, and clays are the most heavily used minerals and are exported mostly to the building trade. Other major minerals near the river include peat, marble, salt, copper, bauxite, iron, and uranium. Other regions of the nation that have not been fully utilized show deposits of manganese, malachite, azurite, feldspar, mica, and talc. Though resources are varied and local construction mines many resources itself, the mining industry still has not been fully developed.

The Paraguay and Parana Rivers have allowed Paraguay to overcome its landlocked handicap in terms of trade and commerce. The 2 rivers join Paraguay to the Atlantic Ocean through Brazilian territory and allow for the export of such items as soybeans, cotton, meat, and timber. Aside from neighboring partners Brazil and Argentina, Paraguay's principal trading partners are in Europe: Germany, Italy, the Netherlands, and Switzerland. Paraguay also imports from Japan and the United States. All of these export and import partners utilize the Paraguay and the Parana trade routes. The nation's numerous airports, as well as its rail and highway networks, facilitate the development of this sector of the economy. Perhaps the most profitable variety of trade in Paraguay is re-export . Paraguay is widely known for its re-exporting of goods: over 50 percent of all goods imported are then re-exported for profit, with little or no change made to them. Smugglers also use this practice in the informal economy .

Paraguay has a developing retail sector in the capital, but the biggest retail center lies in Ciudad del Este, a city on the Brazilian border. Ciudad del Este grew out of a merchants' town and now has more than 6,000 shops over 20 blocks in the heart of the downtown area alone. The streets are heavily peppered with tiny shops, table vendors, and even van vendors and walking vendors. These "shops" are responsible for at least one-third of all money circulating in Paraguay, and have put, on average, US$1 billion in Paraguayan merchandise into Brazil each month during the 1990s. The richest city in the nation, Ciudad del Este is the world's third-largest commercial center, behind only Miami and Hong Kong. Ciudad del Este has a large Asian population, with Chinese who specialize in toys, house wares, and school supplies, and Koreans who specialize in electronics. The city is also responsible for a great deal of trade with Eastern Asia. The smuggling of goods into Brazil and other countries is a big problem, though. Outside of Ciudad del Este, the retail sector in Paraguay is not well developed.

The finance sector of Paraguay is underdeveloped. There are 2 main state banks: the Banco Central del Paraguay and the Banco Nacional de Fomento. The latter specifically handles credits and grants to agricultural ventures and entities in the manufacturing and lumber industries. Some international banks from other parts of Latin America, Europe, and the United States also have branches in Paraguay. The government encourages foreign investment and in the 1990s began developing a stock market, but there is still much more potential for growth in the finance sector.

Tourism in Paraguay has developed very little outside of Asunción, despite the potential of attractions such as Ciudad del Este's retail area and ruins of Jesuit missions. The nation has only 11,000 beds (more than half in Asunción), 34 percent of which are in luxury or five-star hotels, and 52 percent of which are in three-or four-star hotels. Small establishments account for the remainder. Tourism brought in US$144 million annually in the late 1990s. Just over 400,000 tourists visit Paraguay each year, 70 percent of which come from Brazil, Argentina, and Uruguay. Ecotourism —tourism that focuses on nature and wildlife observation—is also growing.

Paraguay has no territories or colonies.