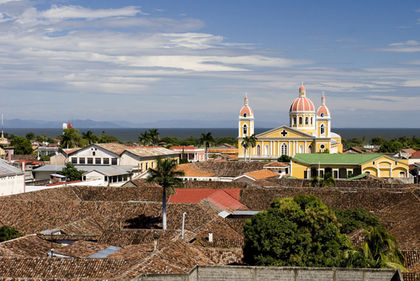 The largest ethnic group in Nicaragua are the mestizos (mixed ethnic backgrounds, mainly Spanish and Native American). Mestizos make up 69 percent of the population, whites comprise 17 percent, blacks 9 percent, and Native Americans 5 percent. The population of the country is 54 percent urban, but the overall population density is low with 33 people per square kilometer.

Farms are divided between small, family-owned subsistence units that are usually less than 10 acres in size and large plantations that produce crops for export. In 1999, the nation produced 4.385 million

metric tons of crops. The largest single crop was sugar cane with 3.749 million metric tons. Other significant crops were corn (302,000 metric tons), rice (136,850 metric tons) and bananas (68,830 metric tons). Although coffee production only amounted to 65,000 tons, it was one of the main cash export crops.

The major livestock products are beef and veal, chicken, lamb, and pork. In 1999, the nation had to import US$219,000 worth of cattle from the United States for breeding purposes to repopulate herds. In addition, the nation's largest slaughterhouse was forced to close in 1999 because of financial difficulties resulting from Mitch. As a result, beef production only grew by 0.7 percent in 1999.

The fisheries industry in Nicaragua includes oceanic catches from the Caribbean and Pacific Ocean, freshwater fish from the nation's numerous rivers and lakes, and farm-raised species. The most profitable catches are shrimp and lobster which are both ocean-caught and farm raised. In the Caribbean, snook accounts for half of all catches, while red snapper provides two-thirds of Pacific harvests. Grouper, catfish, croaker, shark, flounder, and tuna are also caught. Over 80 percent of the fish caught for export come from the Caribbean.

The nation has 65 different commercially valuable species of trees. Among the most valuable species are pine, rosewood, mahogany, and cedar. There is a history of abuse by timber companies. In 1998, over-cutting of forests led the Ministry of Environment and Natural Resources to declare a 5-year moratorium on harvesting cedar and mahogany.

Nicaragua currently has a lower level of industrialization than it did before the Sandinista regime took power in 1979. For instance, although Nicaragua was the world's fourteenth largest gold producer, gold now only accounts for 1 percent of GDP and the nation has fallen behind such small producers as Panama. Manufacturing, mining, and construction form the main core of Nicaraguan industry.

The manufacture of consumer goods , such as clothing, shoes, and processed foods, is the fastest growing component of this sector. Manufacturing is the main sector of industry and in 1998 provided 19 percent of GDP (while total industry provided 22 percent). In 1999, woven apparel exports increased by 17.4 percent and had a total value of US$219 million, while knit apparel was worth US$58 million. Workers in manufacturing earn an average of US$183.95 per month.

During the 1970s, mines produced over US$100 million a year for the nation. Current estimates are that Nicaragua has 3.8 million ounces of gold and 4.9 million ounces of silver available for exploitation. In 1994, production was at 1,241 kilograms, but by 1999, production had risen to over 1,800 kilograms. Silver production has remained constant throughout the 1990s at 2 metric tons per year. Miners are among the highest paid industrial workers in manufacturing, earning an average of US$229.43 per month.

Increased government spending on infrastructure, the growing economy, and the need for new commercial and residential buildings propelled the construction industry growth by 22 percent in 1999. The industry was worth $131.9 million that year. Construction workers earn an average of US$166 per month.

The service sector continues to grow in Nicaragua, but this component of the economy is constrained by a lack of educated and skilled workers. In addition, the continued existence of government monopolies in some fields also limits growth and has prevented foreign companies from entering the market. Workers in the service sector earn an average of US$133 per month, although the official minimum wage for the sector is US$47.95 per month.

Employees in the financial services sector are the most highly skilled and earn an average of US$300 per month. The country has 10 private banks and 2 state-owned banks. There are also 2 finance companies and a leasing firm. The nation's financial sector was valued at US$1.4 billion. There are 2 foreign-owned banks in Nicaragua: 1 Salvadoran (Banco Caley Dagnell) and 1 Guatemalan (Banco Sur). No major U.S. or European banks have established a presence in the country. The state-owned insurance company continues to dominate the market and has 75 percent of business. Because of the dominance of the state insurance company, no foreign firms have entered the market.

The telecommunications market in Nicaragua is expected to expand rapidly. For instance, the number of mobile phone customers has increased from less than 4,000 in 1996 to over 10,000. In 1995, Alfanumeric and Mobile Phone began offering pager service and currently there are 6 paging firms with 20,000 customers.

Fast-food franchises are expanding rapidly in Nicaragua. There are currently 25 different national and international franchisers operating in the country, including McDonald's, TGI Friday's, Subway, Domino's Pizza, and Pizza Hut. Between 1998 and 2001, there was US$21.6 million spent on new franchises, including the establishment of 65 new restaurants.

Tourism is Nicaragua's third largest source of foreign currency. In 1999, it provided revenues of US$105 million. In 2000, approximately 468,000 tourists visited the country, an increase of 15 percent over the previous year. The number-one source of foreign tourists for Nicaragua is Honduras, while the United States comes in at number-two. Because of the potential value of tourism, by 1998 the number of hotel rooms in the country had doubled. Tourists are drawn to the nation because of the low travel and lodging costs. The undeveloped nature of the country also means that many natural and wildlife areas remain undisturbed by human development.

Nicaragua has no territories or colonies.

very useful to everybody..it helps a lot especially students who seek knowledge..thank you very much.
2
brooke

this site helped me alot thankyou its so great for my reports that i have to do!