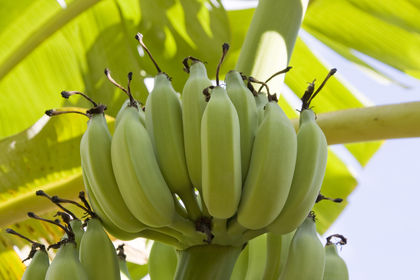 Agriculture employs such a large number of Panamanians (in relation to its percentage of the country's GDP) because many farmers are engaged in subsistence farming and only produce enough for their family to consume. Concurrently, agricultural products also provide the nation's main exports. In 1998, agricultural exports were valued at US$409.3 million (out of the nation's total exports of $640 million), while imports totaled US$397.7 million. That same year bananas accounted for 33 percent of the nation's exports, shrimp 11 percent, sugar 4 percent, and coffee 2 percent. About half of the land in Panama is used for agriculture.

crops such as bananas. For instance, the U.S. company, Chiriqui Land Company, which operates under the brand name Chiquita, is one of the largest landowners in Panama, as well as the main banana exporter. Other major foreign agricultural companies include Del Monte Corporation and Dole Foods.

The primary crops are bananas, cocoa beans, coffee, coconuts, corn, potatoes, rice, soybeans, and sugar cane. Throughout the 1990s, agricultural production increased by an average of 5 percent per year, with the exception of 1998 when Hurricane Mitch caused extensive damage to crops. In 1999, sugar cane production was at 2.05 million metric tons, bananas at 650,000 metric tons, rice at 232,370 metric tons and corn at 89,806 metric tons. The main export crop was bananas with exports worth US$182 million in 2000. There has been a steady increase in tropical fruit exports which were worth US$14 million in 2000.

The main livestock products in Panama are beef, veal, chicken, and pork. Panama has the highest rate of chicken consumption per capita in Latin America. The main fishing product is shrimp, both sea-caught and farm-raised. Although the industry has suffered from the outbreak of disease, in 1999 it was worth US$69 million.

Panama has significant stocks of timber, mainly mahogany. There are also 61,000 hectares of planted forests, mainly teak and pine. However, concerns over deforestation have led to increased regulation of the timber industry. During the 1990s, Panama annually lost 2.1 percent of its forested areas to logging. However, after 1996, timber production dropped by 50 percent. There are 3 major timber companies which own 41 sawmills. Annual output is now around 60,000 cubic meters of forest products.

Very good but I would be interested in if they had radiation in any of these products.
2
Danny

I WOULD LIKE TO IMPORT BANANAS FROM PANAMA INTO GEORGIA.

CAN YOU HELP?
3
someone crazy

I thought that this was super helpful. Here is a thing you could add; Another main crop is mangos.
4
REBECCA R CAILOR

I would like to know how this industry is being affected by drought. I live in Panama and many of the little rivers are drying up.