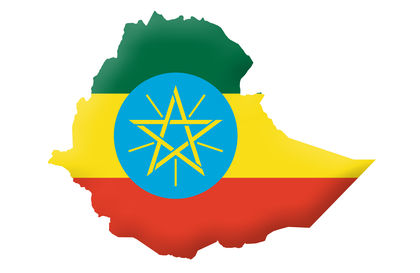 Located in the Horn of Africa— the pointy peninsula-like landmass that emanates out of the eastern part of the continent—Ethiopia has a total area of 1,127,127 square kilometers (935,183 square miles), rendering it slightly less than twice the size of Texas. A landlocked country completely surrounded by other states, Ethiopia has a total border length of 5,311 kilometers (3,300 miles). Ethiopia is bordered by Kenya to the south, Somalia to the east, Djibouti and Eritrea to the northeast, and Sudan to the west. The capital of Ethiopia, Addis Ababa, is located in the heart of the country.

In 1975, the population of Ethiopia was approximately 32.2 million. With a relatively high growth rate of 2.7 percent between 1975 to 2000, the population of Ethiopia doubled during this period, reaching a total of 64,117,452 by July 2000. Currently, the population growth rate remains high (2.76 percent), and it is forecasted that the population will reach 90.9 million by 2015 (July 2000 est.). In order to restrain the growth process, the Ethiopian government recently included a population control component in its overall development program. The death rate was estimated at 17.63 deaths per 1,000 people, and the birth rate was 45.13 births per 1,000 people (2000 est.). In terms of the age structure of the population, 47 percent of Ethiopians are younger than 15 years of age, 50 percent are between the ages of 15 to 64, and only 3 percent are older than 65 years of age. Only 16.3 percent of the population live in urban areas.

Ethnically, the population of Ethiopia is extremely heterogeneous (diverse). The country's principal ethnic groups are the Oromo (40 percent), the Amhara and Tigre (32 percent), Sidamo (9 percent), Shankella (6 percent), Somali (6 percent), Afar (4 percent), and Gurage (2 percent). The remaining 1 percent belong to various other ethnic groups. In total, there are more than 80 different ethnic groups within Ethiopia. Islam is the predominant religion with 45 to 50 percent of the population identifying as Muslim, 35 to 40 percent as Ethiopian Orthodox (a distinct denomination of Christianity), and 12 percent as animist (a term used to delineate a wide range of native African religious belief systems). The remaining 3 to 8 percent are adherents of various other religions.

Many languages are spoken by the inhabitants of Ethiopia, including Amharic, Tigrinya, Orominga, Guaraginga, Somali, and Arabic. Numerous other local languages and dialects also are spoken. Many of the languages are from the Semetic or Cushtic linguistic groups. Amharic is the country's only official language, while English is the major foreign language taught to Ethiopians in the educational system.

Like many African countries, one of the most daunting prospects that Ethiopia faces is a massive HIV/AIDS epidemic. By the end of 1997, conservative estimates stated that 2.6 million Ethiopians were living with HIV/AIDS, while the adult prevalence rate was 7.4 percent. In addition to causing considerable suffering,

HIV/AIDS places a large burden on health care expenditure and diminishes the ability of the poor to save and invest, due to the high cost of treating the disease. According to the United Nations Development Program (UNDP), the efficacy of the government's plan to curb the epidemic will depend on its ability to address the structural factors that facilitate the spread of the disease, such as poverty and gender inequality.

Regarding the exploitation of natural resources, gold, marble, limestone, and small amounts of tantalum are the major minerals mined in Ethiopia. Of these minerals, gold, which provided US$12.5 million to the economy in 1996, is the most significant contributor to export earnings. Gold mining output has oscillated (wavered) considerably throughout the 1990s, fluctuating, for example, from 3,500 metric tons in 1992 to 1,800 metric tons in 1994 and 5,100 metric tons in 1996. Traditionally, the mining industry, which remains under state domination, has played a marginal role in Ethiopia's economy. Resources with potential for future commercial development include potash (recently found in large deposits), natural gas, iron ore, and possibly coal and geothermal energy.

Manufacturing as a percentage of the GDP only marginally increased throughout the 1990s.

In 1992, for example, manufacturing constituted 3.9 percent of the GDP, whereas its percentage share had slightly increased to 4.3 percent by 1998.

The manufacturing sector of the Ethiopian economy produces construction materials, metal, and chemical goods, in addition to basic consumer goods such as food, beverages, clothing, and textiles. Despite massive privatization campaigns, the industrial sector remained dominated by the state, with 150 public (state) enterprises accounting for more than 90 percent of the entire sector's value in 1999. Production by state-owned enterprises is centered on food and beverages, textiles, clothing, leather products, tobacco, rubber, plastic and cement. In 1999, there were also 165 private sector manufacturing firms involved in producing goods such as bakery products, textiles, footwear, and furniture.

Though certain areas of manufacturing are now open to participation by foreigners with permanent residence status as a result of legislation passed in 1998, still other areas, such as garment factories, are restricted from foreign participation. In 1998, there were a total of 163 foreign investment projects with total projected capital investment of US$1.2 billion. Of these projects, 90 were wholly foreign owned while 73 were joint ventures with local partners. Major foreign investors include the United States, with investments worth US$9 million in 1999, as well as Saudi Arabia, South Korea, Kuwait, and Italy. U.S.-based manufacturing companies that have a significant presence in Ethiopia include Pepsi-Cola, Coca-Cola, Caterpillar, General Motors, Xerox, and John Deere. Numerous other U.S. firms also operate in Ethiopia, albeit in different sectors of the economy.

Accounting for 42 percent of the GDP, services are an extremely important component of Ethiopia's economy (1998 est.). At the same time, however, with only 12 percent of the labor force engaged in services and government employment, a relatively small percentage of Ethiopians work in the service sector. The large contribution of services to the GDP stems mostly from the government and the strong financial sector.

According to the aforementioned Country Commercial Guide 2000, the tourism industry in Ethiopia is negligible, though there is great potential for commercial development. With many unique indigenous plant, bird, and mammal species, the country has an enormous diversity of wildlife, exotic landscapes, and architectural ruins of prehistoric, historical, and religious significance. As such, Ethiopia is an ideal location for foreign and local visitors embarking upon historic, cultural, or ecotourism expeditions.

Following the 1974 revolution, the banking and financial sector in general came under the domination of the state. In 1994, legislation was passed that permitted the establishment of private banks and insurance companies but prohibited foreign ownership of such companies.

Ethiopia's central bank, the National Bank of Ethiopia (NBE), seeks to foster monetary stability and a sound financial system by maintaining credit and exchange conditions perceived to be conducive to the balanced growth of the economy. All transactions in foreign exchange must be carried out through authorized dealers under the control of the NBE. The Commercial Bank of Ethiopia (CBE), whose assets totaled over US$3 billion in 1996, is a government-owned bank with 167 branches in operation and over US$1.5 billion on deposit (1996 est.). The CBE, the largest bank in Ethiopia, offers credit to investors on market terms, though the 100 percent collateral requirement limits the ability of small entrepreneurs with limited resources to capitalize upon business opportunities.

Ethiopia's first private bank, Awash, commenced operations in 1994 and now boasts 6 branches in Addis Ababa and 2 in the Oromiya Regional State. In addition to Awash, 5 other private banks now operate in Ethiopia, including Dashen Bank (with a total of 12 branches), the Bank of Abyssinia (2 branches), and Wegagen Bank (5 branches). The 2 newest private banks in operation are NIB International and United Bank. Since the banking and financial reforms of 1994, there are also 7 private insurance companies in operation—United, Africa, Nile, Nyala, Awash, National, and Global. Ethiopia does not have a securities market, although the U.S. Department of State reported that a private sector initiative to establish a mechanism for buying and selling company shares was expected to begin by the year 2000.

Ethiopia's retail sector consists mostly of small shops, local markets, and roadside stands, many of which are part of the informal sector of the economy, which remains unregulated and untaxed. Investment legislation passed in September 1998 also allows foreigners with permanent resident status to participate in retail and wholesale trade.

Ethiopia has no territories or colonies.

Thank you for the above info.
But I have some questions.
1. what about the ATM service case of Commercial Bank of Ethiopia, (starting date, its customer, how many installed and at where)?
2
Gizachew eyasu

What are the list of public service sector organizations in Ethiopia currently? What is their respective contribution to the GDP and Employment currently?
4
ansha

Yes, almost you have done it. On the location side try to incorporate South Sudan. The Comment i do have is about Ethiopia's future fate. Indicate proudly that we are on the right track, thanks to our late leader, we have the right policy and development policy.Ethiopia is one of the ten progressively leading developmental nations in the world. So you need to incorporate this issue.Try to mention Ethiopia with a federal democratic government will continue to be the largest country in the world in all aspects-Democracy, development, social, cultural environmental development.

Thanks this helped me and my history partner a lot!!!
9
Julia Pieria

This is good for my report. Thanks for the info nationsencyclopedia.com!