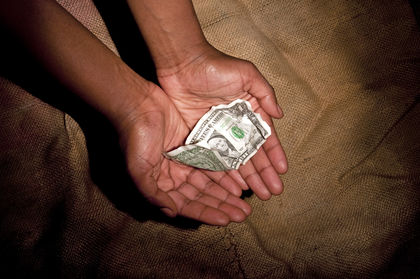 Ethiopia has chronically run a negative balance of payments , rendering the country highly dependent upon foreign aid and loans to finance imports. Throughout the 1990s, the situation has shown little sign of improvement. Indeed, the balance of trade deficit was US$829.4 million in 1992 and—despite a brief amelioration in 1994 when the deficit declined to US$609.5 million—it remained approximately the same in 1998, when it

reached US$830.0 million. The constant deficit ensures Ethiopia's perpetual indebtedness to the commercial banks of the rich industrial countries and international financial institutions, such as the IMF, the World Bank, and the ADB. In 1997, Ethiopia's total external debt stood at US$10 billion.

Ethiopia's major exports include coffee, gold, leather products, beeswax, canned vegetables, tea, sugar, cotton, and oilseeds. Purchasing approximately 22 percent of Ethiopia's exports in 1997, Germany is Ethiopia's largest trading partner. Along with many other countries of EU— such as Italy, France, and the United Kingdom—Germany has steadily increased its quantity of Ethiopian imports. In 1992, for instance, the countries of the EU purchased approximately Br203.3 million worth of Ethiopian exports, whereas this figure increased dramatically to Br1,351.5 million in 1996. Similarly, the United States has increased its quantity of Ethiopian imports from Br19.6 million in 1992 to Br169.9 million in 1996. This major increase in trade with the Western countries can be explained primarily by the fall of the Derg and the subsequent liberalization policies pursued by the EPRDF. Other major importers of Ethiopian products include Saudi Arabia, China, and Japan, the latter of which purchased 12 percent of all Ethiopian exports in 1997. Ethiopia's largest trading partner in Africa is Djibouti, a neighboring country through which Ethiopia must conduct all of its importing and exporting since Ethiopia is landlocked and thus lacks a port of its own.

Ethiopia's major imports include food and live animals, petroleum and petroleum products, chemicals, machinery, civil and military aircraft, transport and industrial capital goods, agricultural machinery and equipment, and motor vehicles. Ethiopia's imports have followed the same pattern as its exports in the 1990s, with the percentage of imports from the countries of the EU and the United States steadily increasing. In 1991, imports worth Br364.7 million were purchased from the countries of the EU, while this figure increased to Br2,006.7 million in 1995. In the same year, a similar value (Br2,300.7 million) of imports came from various countries of Asia and the Middle East, including Japan, Saudi Arabia, and China. With imports to Ethiopia equaling Br146.8 million in 1995, Djibouti is Ethiopia's number-one regional exporter, while Kenya is second.

Ethiopia's balance of trade deficit can be largely explained by the unequal terms of trade between agricultural commodities (the country's major exports) and capital goods (Ethiopia's major imports). International markets accord a higher price to commodities that are manufactured—or "value-added"—than to those that are in their raw form. Recognizing the uneven terms of international trade, many countries, including Ethiopia, pursued policies of protectionism throughout the 1960s and 1970s to develop national industrial capacity or import-substitution . In many cases, where the state pursued policies of complete industrial control, they failed miserably. For others, however, such as the economies of Southeast Asia, the policies were more successful, enabling these countries to eventually partake in liberalized free trade at the global level.

Ethiopia's policies of import substitution were largely disastrous. This does not mean, however, that the country should necessarily abandon all forms of protection in favor of free trade, which is theoretically designed to increase the efficiency of national industries through competition with the outside world. Instead, such liberalization may lead to the inability of Ethiopian industries to compete at all, thereby further assuring the dominance of the agricultural sector. To date, Ethiopia has proceeded with the liberalization process relatively cautiously, maintaining an average tariff rate of approximately 20 percent (1997 est.), though there are plans to reduce this figure to 17 to 18 percent. Ethiopia is considering application to the World Trade Organization (WTO), and it is already a member of the Common Market for Eastern and Southern Africa (COMESA). Regional trading arrangements such as the latter may offer member countries the opportunity to profit from increased trade while competing from a more level playing field. There has been little trade increase between the members of COMESA, however.

Many writers have been writing on the issue of Ethiopia's trade performance.It is fact that the country is excpected to work hard to overcome the problem of trade Imbalance.Here I have a qustion.How the country could be beter benifeted from its cooperation with particularly the fastly developing states like China?
2
T.Amare

very Informative for those who are intersted with the issue.
3
Tesfaye

question
1. How both domestic and foreign Ethiopian trade policy affects women and men differently?
2. Even though the policy that we follow wants to make a positive trade balance what makes the country to fail in negative trade balance?
3. What does it mean when we say the government deregulate the price?
4. the reason why the government impose tariff on imported item is to increase government revenue and to decrease import. why the the Ethiopian government follow the reduction of import tariff mechanism?
5. What is the advantage and disadvantage of making bank and insurance services to open or not to open to foreign investors in Ethiopia?
6. In what way trade liberalization harms and benefit Ethiopia? Which one is greater?
7. Which type of exchange rate Ethiopian government follow? Fixed exchange rate system and floating exchange rate system? why? In what way it affects men and women differently?
4
Ephrem Abayneh

why Ethiopia needs to implement the import substitution policy.
7
Demeke

Why did Ethiopia incur huge deficit in its trade balance with in China?

In what way trade liberalization harms and benefit Ethiopia? Which one is greater?

I need to now more about the trading balance (both import & export) .
Thank you very much indeed.
8
Amen Tariku

Ethiopia rocks. It is number one and even though it has weaknesses it is still the best country there is. NUMBER 1ST