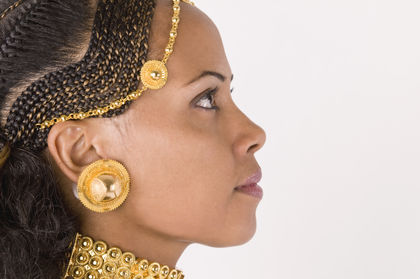 Eritrea is an eastern African country occupying an area of 121,320 square kilometers (46,841 square miles), which makes it slightly larger than the state of Pennsylvania. It borders Sudan to the north and west, Ethiopia and Djibouti to the south, and the Red Sea to the east. Its land borders extend for 1,630 kilometers (1,012 miles), while its total coastline is 2,234 kilometers (1,388 miles). Eritrea's capital, Asmara, and its 2 other major cities, Assab and Massawa, are in the southeastern and eastern parts of the country.

The major ethnic groups of the predominantly African population of Eritrea are the Tigrinya (50 percent), Tigre and Kunama (40 percent), Afar (4 percent), and Saho (3 percent). There are a variety of religions in the country, with Muslims, Coptic Christians, Roman Catholics, and Protestants dominating. There are also a variety of Cushitic languages spoken in the country. The population is young, with 43 percent under the age of 15 and only 3 percent above the age of 65.

Industry is the second largest sector after the service sector. Its main activities, manufacturing and mining, accounted for 29.5 percent of the GDP in 1998, valued at $855 million.

The manufacturing industry is unable to meet domestic needs, while its exports are insignificant. Exports earned a paltry $4 million in 1998, while imports of industrial goods ran to $250 million. Manufacturing consists of Asmara-based small and medium size establishments producing consumer products such as glass, leather, processed foods, cotton, textile, liquors, and other beverages. New factories produce marble, recycled plastics, metals, and rubber goods. Low investment and management capacity, outdated machinery, and poor infrastructure have prevented growth, and the Eritrean government has privatized some of its industries while ending subsidies to others to stimulate development. It has also lowered taxes and tariffs on industrial exports and imports and offered other incentives to foreign investors.

Eritrea's mining industry is small but has growth potential. Its mineral resources include substantial reserves of barite, feldspar, kaolin, gold, potash, rock salt, gypsum, asbestos, and marble. If mining developed, Eritrea's proximity to the Middle East and Europe would be favorable to the export of minerals to those markets. In the absence of domestic investments, companies from Australia, Canada, France, South Korea, and the United States have operated or now operate limited mining operations there. Mineral exports accounted for $12 million in 1998. Eritrea has sought foreign investment for the exploration and development of offshore oil and gas reserves, but Anadarko, an American company, stopped drilling operations in 1999 after disappointing results.

Eritrea has a small state-run financial system. It consists of a central bank, the National Bank of Eritrea (NBE), 4 other banks, dominated by the Commercial Bank of Eritrea (CBE), and an insurance company, the National Insurance Corporation of Eritrea. The NBE accounted for over 60 percent of Eritrean banking assets in 2000. Except for the Housing and Commerce Bank of Eritrea, owned by the ruling party, all other financial institutions are state-owned, and the government licensed several private exchange offices in 1997 to liberalize the industry. No foreign financial institution operates in Eritrea, but the CBE has arrangements for money transfers with 40 foreign banks.

With its long warm-water coastline and an abundance of historical, archaeological, and natural sites, Eritrea has much to offer as a tourist destination. However, the development of tourism is constrained by the lack of basic infrastructure. There are only 11 hotels, all in Asmara, all of which require renovation. The government has privatized 3 hotels but has failed to find buyers for the rest. Thanks to some success in attracting foreign investment, in 2000 the first foreign hotel, the Inter-Continental, was opened in Asmara. In that year the government negotiated the construction of a casino and several hotels on the Dahlak archipelago by U.S. and Saudi Arabian companies.

The retail sector of Eritrea is poorly developed. It consists of small-scale traditional shops that are unable to ensure the accessibility of goods and services to either the rural or the urban populations. The emerging middle class is encouraging the establishment of modern retail outlets in major urban areas, but the economic devastation of the country has delayed the creation of a viable retail sector.

Eritrea has no territories or colonies.

i think it is very helpful,

because for my homework i got top marks and i used this website!
so thank you for the people who made this website.

A very good summary and overviw I think.
I am going to Eritrea for my second time and wanted to know whay "is behind the country" and the information provided on this site was very useful.
3
ahmedin

I read this summary about Eritrea,its culture, its economy and about the population and it is really good and helpfull and i appreciate your hard work on this issue.How ever i feel that there are minor things that need modifications. for example you have mentioned only 5 of the 9 ethnic groups and it would be nice to include the rest of the ethnic groups(nara,hedareb,bilen and rashaida). the second point i would like to mention is that saho ethnic group is the 3rd largest in the country and the population percentages given to it by many schollars vary from 5% to 11%.so the percentage that you have given to it in this summary seems to be some thing that has to be corrected. thanks
4
DG

Good summary but needs to be updated. Most of the information talks about Eritrea in the late 1990s.