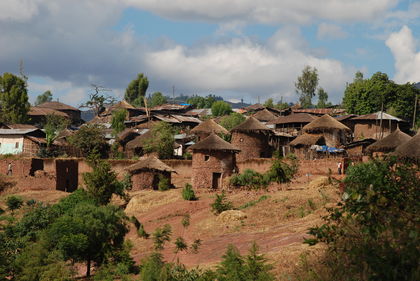 Agriculture, which constituted 46 percent of GDP and more than 80 percent of exports in 1998, is by far the most important economic activity in the Ethiopian economy (1998 est.). An estimated 85 percent of the population are engaged in agricultural production. Important agricultural exports include coffee, hides and skins (leather products), pulses, oilseeds, beeswax, and, increasingly, tea. Domestically, meat and dairy production play an integral role for subsistence purposes.

With 25 percent of all Ethiopians—approximately 15 million people—gaining their livelihoods from coffee production, the coffee sector is the most important agricultural activity. According to the U.S. Central Intelligence Agency World Factbook 2000, coffee production, Ethiopia's largest source of foreign exchange, contributed US$267 million to the economy in 1999, with export volumes equaling 105,000 metric tons. Coffee has long held a central role in Ethiopia's export economy and, as early as the mid-1970s, about 55 percent of the nation's total export earnings derived from coffee exports. This percentage share remained more or less constant until the mid-1990s, when it increased to an average of 63 percent of total export earnings between 1995 to 1998.

With the export economy so heavily dependent upon the exportation of a single crop, the Ethiopian economy is structured into a precarious (insecure and dangerous) position. If annual production declines as a result of a bad harvest (due to natural factors, such as drought—a constant threat), export earnings will suffer considerably, exacerbating (making worse) the country's already negative balance of trade. Similarly, if all coffee producing countries produce large amounts of coffee in a given year—resulting in an excessive supply—international prices for coffee will decline and Ethiopia's export economy will accordingly suffer. Such was the case in 1998, when a glut in the world supply of coffee reduced Ethiopia's coffee earnings by 22 percent from the previous year.

With 75 million heads of livestock, Ethiopia has the largest concentration of livestock on the African continent. According to the Country Commercial Guide 2000, however, it is difficult to calculate the cattle sector's exact value, since a substantial amount of meat and dairy production is for subsistence consumption. In certain regions, such as the highlands, livestock is utilized only to support farming. Still, hides and leather products are Ethiopia's second most important export, though the Commercial Guide states that the sector's huge potential remains largely untapped, as a result of weather conditions (drought), diseases, and the lack of a coherent government plan for the development of the sector. In 1996, Ethiopia produced 8,500 metric tons of leather and leather products for exportation, thereby earning a total of US$6.5 million.

Ethiopia is also the continent's leading producer and exporter of beeswax and honey. The country has approximately 7 million bee colonies. Other important agricultural activities include tea production, which has reached approximately 4,000 metric tons of output in recent years, and cotton and sugar production. Moreover, there are opportunities for expanding cultivation and export of dried fruits, cut flowers, and canned vegetable products.

While the agricultural export economy is constantly subjected to the caprices (whims) of the weather, so too is agricultural production geared towards domestic consumption. In 1992, for example, IMF statistics indicate that Ethiopia produced 51,850 quintals of cereals, mostly for domestic consumption, whereas the following year the cereals output dropped to 47,404 quintals—a decline of 8.6 percent. The decrease was largely the result of drought. The fact that Ethiopia has an extremely poor infrastructure for agricultural production does not help the matter. Though there is the potential for Ethiopia to become self-sufficient in grain production, the country must currently continue to import grains in addition to receiving food aid in order to feed the population.

Like many African countries, Ethiopia confronts several environmental issues that are particularly problematic for the agricultural sector of the economy. Such issues include deforestation (depletion of forests), over-grazing (depletion of pastures), soil erosion (depletion of quality soil), and desertification (extensive drying of the land). Since only 12 percent of all Ethiopian land is arable, 1 percent is used for permanent crops, and 40 percent is comprised of permanent pastures, it is essential for Ethiopia to address these environmental problems in order to maintain the land so fundamental for agricultural activities. Moreover, according to Girma Kebbede, the author of The State and Development in Ethiopia, it is precisely these environmental problems—rather than just the shifting weather patterns—which contribute primarily to the chronic famines that so frequently plague the country. Quite simply, limited arable land as a result of soil erosion and other environmental difficulties mean that in times of drought, there are very few available methods to prevent widespread famine.

This is good for knowabout ethiopia agriculture and marketing.

I heared some news about agriculture in ethiopia,that governament has given lands for free of cost for agriculture,is it right?,and how to come there?
2
rampal singh

I am rampal,DOB 1964,belong to haryana.I am Bsc.agriculture gratuate that had been passed in 1988 & post gratuation Msc.sugarcane technology in 2010. Having an experience of sugar industries from 1993 And till to be continue. Iheared some news about agriculture that govt. has given lands free of cost for farming, is right or not and what is the procedure how to come there.
3
y narendrakumar

what are the valuble informatiobn to our ccountrieas
do you think such infomation is enghoph to our cou ntries agriculture?
know we are living in civilized world
5
anil maheshwari

i have heard the same and am keen to find out the facts. if somebody have any information about
it i will be pleased to share it with him
6
MUKESH S GOUR

This is good for know about ethiopia agriculture and marketing.

I heared some news about agriculture in ethiopia,that government has given lands for free of cost for agriculture,is it right?,and how to come there?

I WANT TO KNOW IF THE GOVERNMENT OF ETHOPIA IS GIVING LAND FOR AGRICULTURE PURPOSE . KINDLY GIVE ME THE DETAILS ABOUT THIS OPPURTUNITY . I AM INTRESTED IN IT.
8
Lakshmish

I am from india, i want a information about the price fixed for agricultural land for a hectare. And what are all the documents required.
9
Chanie Derso

It is obvious that Agriculture is the back bone of Ethiopian economy. Every and each citizen exactly know it.But nothing towards action!!Therefore, we all are going to stand as soon as possible for our ENVIRONMENT!!!
10
RAGHAVENDRA

first of all I would like to thanks for your help. I wants to know agricultural credit and its contribution in ethiopian please give some informaton.
12
angela

I Appreciate the government of ethiopia because he gives priority to farmers it lead to produce large ammount of exportable products. i want to know how much the governement of ethiopia import agriculctural products.
14
Dr. Ishwar Singh