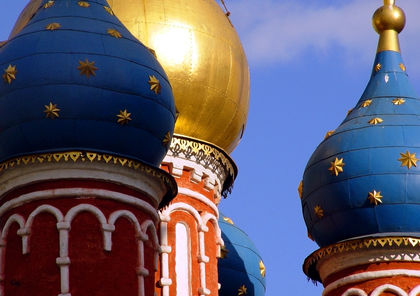 In terms of territory, Russia is the world's largest country. With a total area of 17,075,200 kilometers (6,592,735 square miles), Russia covers about one-eighth of the world's land surface. Russia is 60 percent larger than the world's second-largest country, Canada. But, like Canada, much of Russia's territory is located above the 50th parallel, where subarctic and arctic weather conditions are prevalent. Until the disintegration of the Union of Soviet Socialist Republics (USSR or "Soviet Union") in 1991, the Russian Soviet Federated Socialist Republic was the largest and dominant administrative component of the Soviet Union. In August 1991, the Russian Republic was one of the 15 countries that declared independence from the Soviet Union.

Russia stretches from its westernmost point in the city of Kaliningrad, just north of Warsaw, Poland, to its easternmost point at Big Diomede Island in the Bering Strait. Within eyesight is Little Diomede Island, belonging to the United States just off the coast of Alaska's Seward Peninsula. Russia's great breadth of territory includes many different geographical regions. These include areas of permafrost (areas of eternal ice) in Siberia and the Far North as well as taiga and steppes (vast grassland). Much of Russia's northern and eastern coastline is hemmed in by ice for much of the year, complicating navigation. However, Russia has year-round warm water seaports at Murmansk on its northwestern coastline of the Barents Sea and at Vladivostok at the far eastern coast on the Sea of Japan / East Sea.

The population of Russia was estimated at 146,001,176 (July 2000 est.) by official U.S. government sources. According to official figures, the Russian population growth rate is negative, declining at a rate of 3 percent a year. The birth rate was at 9 births per 1,000 persons per year in 2000. The death rate was at 13.8 deaths per population per year. The declining population in Russia is taking place in the presence of a net in-flow of migrants. Migration to Russia averaged 1.38 migrants per year per 1,000 persons during 2000. The migration into Russia is composed heavily of migrants from the 14 countries of the former USSR that adjoin Russia but became independent states in late 1991.

Roughly 80 percent of Russia's population is ethnic Russian. The remaining 20 percent is made up of a wide variety of ethnic groups including Tatar, Ukrainian, Belarussian, Moldavian, Kazakh, and many others. About three-fourths of the population of Russia is urban. Moscow, Russia's capital and largest city, is home to some 9 million people. Russia has a well-educated population with near universal literacy.

Previously Russia was the world's sixth most populous country, following China, India, the United States, Indonesia, and Brazil. The Population Reference Bureau, one of the world's leading professional demographic organizations, differs with the official U.S. government

The USSR was a multinational country with a population of 289 million people. The country was made up of more than 100 ethnic or "national" groups. Today's Russian Federation (or simply "Russia") emerged from the USSR with roughly one-half of the USSR's population. In the aftermath of the Soviet breakup, millions of people relocated from the parts of the USSR in which they lived to new homes in the 15 countries that resulted. This migration involved many of the citizens of the USSR relocating to their native homelands. Even after these population adjustments, however, Russia is still a large and varied country. Dozens of different language groups and ethnic groups occupy Russia today.

Many of the minority groups within Russia have asserted their right to greater cultural autonomy and, sometimes, political autonomy. A minority area within Russia inhabited largely by the Chechen people proclaimed independence from Russia in 1994. Russian troops crushed the separatist movement. Russia proclaimed victory over the breakaway area of Chechnya in 1996, but the war erupted again in 1997. The brutal Chechen war has left much of this corner of Russia in ruins and has contributed to an ethnic terrorist campaign against Russia. Chechnya lies in one of Russia's most economically strategic regions, across which passes oil and gas pipelines carrying energy resources to European and world markets. Independence in Chechnya would result in these pipelines falling under the control of Chechnya rather than Russia.

Russia's previously underdeveloped services sector has played an important role in containing the social calamity of the collapse of the USSR, manufacturing and industrial sectors. The service sector employed 55 percent of the workforce and contributed 59 percent of GDP in 1999, according to the CIA World Factbook. Important service industries include financial services; advertising, marketing, and sales; tourism; and retail trade.

Foreign and domestic tourism was centrally managed during the Soviet Union. In 1991 the tourism industry was reorganized and today is one of the most important branches of the service sector, both in terms of total revenue and numbers of employees. The number of tourist companies has grown from several state tourist organizations in 1991 to several hundred in the larger Russian cities today. Most tourist firms are small, employing fewer than 15 people, and function as both operators and agencies. Operators are those firms that develop their own tourist routes. Tourist agencies market the existing routes established by operators. Most travel transactions involve the domestic market, offering travel services within Russia either for foreigners or for domestic travelers. Providing services for Russians traveling abroad is a smaller but more lucrative market.

In the old USSR domestic tourism was one of the largest industries. There were many resorts, recreational centers, tourist bases, and summer camps for children. Large enterprise and labor unions provided people with inexpensive package tours. During the first years after the breakup of the Soviet Union, domestic tourism declined sharply, but has regained ground since then. Russian tourists travel abroad to Europe, the countries of the Mediterranean, and the United States—a popular tourist destination for young people. Local foreign language schools often offer English language training in the United States to teenagers and young people. Obtaining visas to travel to the United States, however, involves complicated regulations and is often a hindrance.

Russia is a popular destination for foreign tourists, primarily because of its cultural attractions. Over 80 percent of foreign tourists come to Russia with the intention of visiting Moscow and/or St. Petersburg. However, in recent years the country's natural environment has attracted a growing proportion of foreign travelers. Russia may one day become a popular destination for eco-travel, attracting adventure travelers and tourists looking for something out of the ordinary. Travel to Russia is particularly well-represented by travelers from Germany, China, the United States, Japan, Italy, Poland, Turkey, and Israel.

A legacy of Soviet-era infrastructure neglect, oppressive paperwork, high costs, and lack of local marketing know-how have limited attractiveness of travel to Russia for many foreigners. Despite improvements in the first decade since the Soviet breakup, the Russian travel industry continues to be hindered by the lack of accommodations and travel-related services that are in accordance with international standards. Recent years have witnessed improvements in the quality of services. In addition, new programs have been instituted that provide training in hotel and restaurant management services. At the same time, new hotel, restaurant, and recreational equipment and expertise have become more widely available.

But the Russian banking system is still in a state of transition. Banks do not have the resources, capability, or the population's trust to attract substantial savings and channel them to productive investments. While ruble lending doubled in the 2 years following the August 1998 financial crisis, loans remained at the pre-crisis level of 30 percent of total bank assets. The Russian Central Bank reduced its refinancing rate 3 times in 2000, to 33 percent, signaling an attempt to lower lending rates. However, banks still perceived commercial lending as risky, and some banks were inexperienced at assessing credit risk. The Russian Central Bank announced that it was developing a procedure to finance banks for promissary notes, rights of claim under credit agreements, and mortgages.

Russia has no territories or colonies.

THE INFORMATION THAT I FOUND HERE HAS BEEN VERY HELPFUL TO ME IN COMPLETING MY CLASS PROJECT. THANK YOU VERY MUCH. KEEP UP THE GOOD WORK. I DON'T KNOW WHAT COUNTRY I WILL HAVE TO DO NEXT SEMESTER BUT I WILL BE RETURNING TO SWIM IN THE INFORMATION THAT YOUR SITE PROVIDES AND ONCE AGAIN THANK YOU.

the info i found in this article is good for my project in class. since we had to do on our country and im RUSSIAN. i found alot of great info which helped me alot. thx i will be returning to u'r web site soon since we in class have to buddy up with some1 in our class and we all have to either do russia, china, america or india. i think me and my buddy will do russia since she is my BFF and we always do what we agree on so yeah i guess we will do russia coz i really wanna do it and so does she. once again thx for the great info. hoping to come to u'r website again soon.

Thanks for all the help This info was a great help with my school project.Thank you so much. I will return to this site next time I have a country project. Thanks alot.
Sincerely,
Kate
4
sally

thaks so much for all the stuff you've given me. it helped me a lot with my history project! i'm for sure going to get an A! :)
5
geeti sultani

I lived in Russia 10 years and I Love Russia,if you want to go there then go because Russia is so so so pretty
6
Ghostgirls

this really helped with me my school project. since i was doing Russia and on of my friends acts like he is Russian then this info really helped, because he knows and wants to learn more about Russia so this really helped. thank you.
7
Miranda tyus

This was very helpful information for my school project and because of it I got an a+ thanks and nice job keep it up;)
8
marthil louis

thanks this website helped so much I have to do a project and this got half of the project done
:) thanks so much
Chrissy