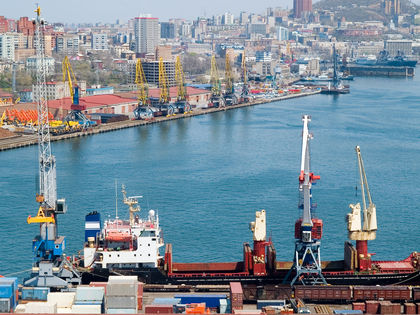 Russia's foreign trade consisted of US$75 billion in exports and imports of US$48.2 billion in 1999 and then to US$105.1 billion in exports and US$44.2 billion in imports by 2000. Russia sells a broad range of commodities and manufactures including petroleum and petroleum products, natural gas, wood and wood products, metals, chemicals, and a wide variety of civilian and military manufactures. Russia's largest trading partners for exports are Ukraine, Germany, United States, Belarus, the Netherlands, and China. Russia imports machinery and equipment, consumer goods, medicines, meat, grain, sugar, and semi-finished metal products. Russia's largest trading partners for imports are Germany, Belarus, Ukraine, the United States, Kazakhstan, and Italy.

Real GDP growth in Russia in 1999 was over 3 percent. The main contributing factors were the devaluation of the ruble, which made Russian products competitive abroad and at home; high commodity prices on international markets, particularly oil (while domestic costs were substantially lower); low inflation and a consensus that inflation must be controlled; and a relatively healthy fiscal situation based on strict government budget discipline. The major contributor to growth was trade performance. Exports rose to US$74.3 billion while imports slumped by 30 percent to US$41.1 billion. As a result, net exports ballooned to US$33.2 billion, more than double the previous year's level. Higher oil prices had a major effect on export performance, particularly in the latter half of the year. Even though volumes of crude oil exports (to non-CIS countries) were down by 3 percent, prices jumped 46 percent. Fuels and energy comprise 42 percent of Russian exports. Other exports performed better in 1999; fertilizer exports were up 16.7 percent, forestry products up 38 percent, copper up 17.6 percent, and aluminum up 10 percent.

Trade with other former Soviet states is overwhelmingly in energy and industrial products, and in many instances has been, until quite recently, conducted by barter. Russia's trade surpluses eroded over the course of 1998. Imports to Russia grew by 10-15 percent per year between 1995 and 1997, as consumers benefited from an appreciating ruble and rising average wages. At the same time, export revenues were falling, due in particular to sharply lower prices for oil and gas (accounting for 43 percent of merchandise exports in 1997). Moreover, Russia's manufactured exports compete poorly on the world market, especially since Asian goods have become less expensive following steep currency devaluations. The devaluation of the ruble and difficulties in completing transactions through the Russian banking system reduced imports substantially. Frequent changes in customs regulations also have created problems for foreign and domestic traders and investors.

Russian oil companies have been rushing to export their oil (resulting in a windfall of hard currency coming into the country) to such an extent that Russian officials have set export quotas in order to maintain an adequate domestic supply of oil. In 2000, Russian net oil exports totaled 4.3 million metric barrels a day (MMBD). In addition to export quotas and higher taxes levied on oil exports, a serious problem facing exporters is the lack of export routes. Russia is maneuvering to become a major player in the exploration, development, and export of oil from the Caspian Sea. Transneft is the parastatal responsible for Russia's extensive oil pipeline system. Many of these pipelines are in a poor state of repair. The Russian Fuel and Energy Ministry notes that almost 5 percent of crude oil produced in Russia is lost through pipeline leaks. Transneft lacks the funding to repair or upgrade many of these malfunctioning pipes. The company's focus has been on building new pipelines rather than repairing the old. In addition to those in the Caspian Sea Region, Russia has a number of new oil and gas pipelines planned or already under construction.

Well so thanks for this information. I really learned alot from this page its has help me learn so i can do well on this project in school but whoever wrote this thank-you very much!