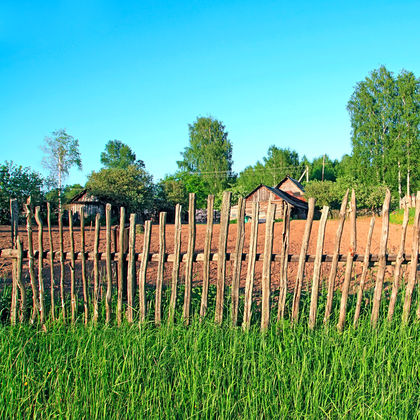 Employment in agriculture and forestry remained relatively constant in recent years. Agriculture and forestry employment accounted for about 14 percent of total employment in 1999, about the same level as a decade earlier. Russia comprises roughly three-quarters of the territory of the former Soviet Union, but only a small amount of this vast area is suited for agriculture because of its arid climate and inconsistent rainfall. Nevertheless, with 133 million hectares of arable land, a large agrarian workforce (14 percent of the total), and 146 million inhabitants to feed, Russia is a major regional and global agricultural producer and consumer. The Russian fishing industry is the world's fourth-largest, behind Japan, the United States, and China. Russia accounts for one-quarter of the world's production of fresh and frozen fish and about one-third of world output of canned fish. Russia has a major forestry industry, possessing one-quarter of the world's forests.

Northern areas concentrate mainly on livestock and the southern parts and western Siberia produce grain. Restructuring of former state farms has been an extremely slow process, partially due to the lack of a land code allowing for the free sale, purchase, and mortgage of agricultural land. Private farms and garden plots of individuals account for more than one-half of all agricultural production. Much of the agricultural sector has been almost unaffected by the transition to the free market. Accordingly, the output performance of agriculture has been very weak. This has tended to strengthen the arguments of those who oppose economic reform in favor of a return to the state-managed economy of the past.

Primary agriculture in Russia continues to be dominated by inefficient, Soviet-type collective farms with outdated technologies and management skills and strong political connections, especially at the regional level. Household plots and small private farms comprising only 3 percent of the agricultural land account for over 40 percent of the country's food production. The business infrastructure for the agriculture sector is especially underdeveloped including support services, transportation, distribution networks, and financial services. For agriculture in Russia to go through the transformation to a modern system, the key step will be establishing and enforcing farmers' rights to use land. The first step in this process is to develop an efficient system of issuing and protecting title to land rights. This will also require a more reliable and enforceable framework for secured financial transactions so that farmers can buy and sell their land or use the land as collateral for obtaining loans.

The economic reform that began in Russia in the early 1990s reduced Russia's livestock sector. The down-sizing of the livestock sector ended the need for imports of feed grain, soybeans, and meal. At the same time, imports of meat and other high-value products such as processed foods, fruit, and beverages grew considerably. The 1998 economic crisis reduced Russia's ability to import food. After plunging to extremely low levels in late 1998, agricultural imports rebounded in 1999. Imports of most agricultural and food products grew to roughly 60 percent of the level of the pre-crisis period. Imports dropped because the crisis reduced consumer incomes, thereby decreasing demand for food in general, and the severe crisis-induced depreciation of the ruble made imported food more expensive compared to Russian domestic output.

The large former state and collective farms control most land. Farm workers can branch off as private farmers by obtaining a grant of land from their parent farm, though they lack full ownership rights. The land code proposed by the Russian legislature (the Duma) does not change existing law—that is, it does not allow the free purchase and sale of land for agricultural use. Rather, it would allow land to be bought and sold solely for economically insignificant purposes, such as building a summer cottage, a dacha.

Could you give me more info about AGRICULTURE OF NORTHERN RUSSIA ?