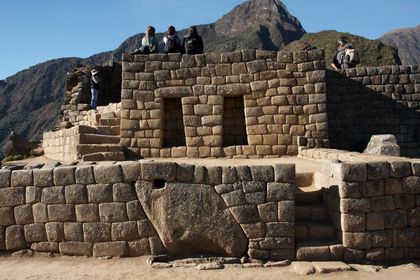 Peru is located on South America's central Pacific coast. The world's twentieth-largest nation, it borders Bolivia, Brazil, and Chile to the east and south, and Colombia and Ecuador to the north. Lima, the capital, is located on the central coast. Peru's 1,326,074 square kilometers (512,000 square miles) make it roughly the size of Alaska. Lima is approximately the size of Rhode Island.

The largest population group is Amerindian, accounting for 45 percent of the population. The principal Amerindian groups are Quechua and Aymara highland indigenous people. Lowland indigenous groups, representing roughly 350,000 people, are divided into 52 different peoples, the largest of which is the Ashaninkas. Mestizos—mixed Amerindian and Caucasian—represent 37 percent and whites account for 15 percent. The remaining 3 percent of the population is formed principally of blacks, Chinese, and Japanese—descendants of people brought over as slaves or indentured servants. In 2000, Chinese-Peruvians celebrated the 150th anniversary of

their arrival in Peru, while the Japanese community celebrated its 100th anniversary.

Peru adopted an aggressive family planning program in 1995, which former President Alberto Fujimori announced at the United Nations Women's Summit in Beijing that same year. The plan included free access to birth control and a nationwide education campaign. The Ministry of Women and Human Development was created at the same time. The plan, however, was attacked for employing forced sterilization of women and men, including 300,000 tubal ligations and 100,000 vasectomies. At least 36 deaths were blamed on the sterilization campaign. Despite the government's efforts, the birth rate did not decline in the second half of the 1990s, remaining at 24.48 per 1,000. (In contrast, the birth rate per 1,000 in the United States is 14.2, a little more than half the Peruvian rate.) The plan came under review in early 2000, and women's rights groups are calling for a "truth commission" to investigate the forced sterilization component.

Peru is an international leader in fishing, producing nearly 10 percent of the world's fish catch. The cold-water Humboldt Current brings nutrient-rich cold waters that create ideal fishing grounds. Peru exported more than US$1 billion in fish products in 2000—most of it as fishmeal—and fished nearly 10 billion tons, making fishing the second-most important industry after mining. Fishing has been a mainstay in Peru for thousands of years, playing a key role in ancient societies. In modern times, fishing has boomed due to whaling in the late 19th century and demand for guano (bird dung), a byproduct of fishing found on small islands off the coast.

While always important, the full use of Peru's fishing resources did not occur until the mid-20th century with the introduction of fishmeal production. The star of the fishmeal, which is used for animal feed or fertilizer, is the Peruvian anchovy. For most of the 1960s and 1970s, Peruvian anchovies accounted for 44 percent of the world fish catch destined for non-human consumption. The fishing industry's participation in the GDP varies yearly, depending upon the catch and ocean conditions. In years when El Niño is present, such as 1998, the sector's participation falls to below 1 percent of GDP. Fishing currently accounts for roughly 3.5 percent of GDP and, because it is not a labor-intensive industry, employs approximately 80,000 people.

The government began privatizing the fisheries industry, PescaPeru, in 1994 in a process that continues today. The government has sold its participation in all processing plants and fishing fleets, and is now preparing to privatize fishing ports as a general program to privatize all the nation's ports. The Fisheries Ministry is also beginning a process of privatizing experimental and research centers as well as fish-farming installations. The industry is facing another potential downturn because of the fear created by "mad cow" disease in Europe. The European Union nations voted in early 2001 to ban all feed products made from animals, including fishmeal. The scope of the ban was later reduced, but restrictions still apply. Peru's fishmeal exports to Europe declined by 41 percent in the first quarter of 2001.

Mining has been a central element in Peru's history for thousands of years. The Andes are rich in minerals and gold, and silver pieces can be found in numerous pre-Columbian societies. Mineral exports are a key to the country's economy, representing nearly half of Peru's exports in 2000. Peru ranks eighth worldwide in gold production (first in Latin America), second in copper, and among the top 5 producers of lead and zinc. Two of Peru's gold mines, Yanacocha and Pierina, are among the most productive and profitable gold mines in the world. Peru has an estimated 21 million fine ounces of gold reserves in mines currently under operation and 42 million fine metric tons of copper reserves. An additional 100 gold mines are predicted to come on line in the next 5 years. Also looming in the near future is the massive Antamina project, a Canadian-led mining operation that will require US$2.3 billion in investments and is expected to produce copper, zinc, lead, gold, and silver for the next 30 to 40 years. Antamina is the largest mining project underway in the world.

Mining activity and exports have grown exponentially since 1991, when the government adopted a series of new rules and tax benefits for large-scale mining, streamlined the process for filing a mineral claim, and allowed companies to re-invest upward to 80 percent of profits tax free. Mining exports grew from US$1.2 billion in 1987 to US$2.7 billion in 1997. Gold witnessed the greatest increase, rising from less than US$1 million in exports in 1987 to US$500 million in 1997. Gold exports are now US$1.2 billion, according to the World Gold Council.

Like fishing, however, mining is not a labor-intensive activity, creating few jobs and demanding huge investments for each job created. Nevertheless, mining represents one of the few money-making activities in the Peruvian highlands, particularly in areas higher than 12,000 feet above sea level where most mining operations are located. Mining represents 10 percent of GDP, according to the U.S. State Department's Country Commercial Guide.

Because of its long dependence on raw material exports, Peru has never developed a strong manufacturing sector. The sector represents 15 percent of GDP and is tied heavily to mining, fishing, agriculture, and textiles. Manufacturing is mainly devoted to processing a percentage of the raw materials to gain a value-added advantage. The most promising sector is textiles, with Peru exporting nearly US$700 million in garments in 2000, mainly to the United States and Europe. Textiles represent the largest non-raw material portion of the Peruvian export economy. Peruvian textiles are currently exported duty -free to European Union nations under an agreement to help the country fight the drug trade. The U.S. Andean Trade Preference Act (ATPA), passed in 1991, has the same goal, exempting nearly 6,000 products produced in Bolivia, Colombia, Ecuador, and Peru (all major drug-producing nations) from tariffs. Textiles, however, were left off the list. The 4 governments are lobbying for the U.S. Congress to include textiles on the trade list when ATPA is renegotiated in December 2001. Peruvian garment makers generally produce high-end products for the U.S. markets, including brand names such as Ralph Lauren, Brooks Brothers, and Bobby Jones.

Tourism has represented a new growth industry in Peru since the early 1990s, with the government and private sector dedicating considerable energies to boosting the country's tourist destinations both to Peruvians and foreigners. Foreign tourist arrivals have jumped from approximately 90,000 in 1990 to more than 1 million in 2001, with a corresponding upswing in investment in services. The U.S. State Department's Country Commercial Guide estimates that US$330 million will be spent on new hotels alone between 2000 and 2005. The government estimates that 1 million new jobs will be created if it reaches the goal of 2.5 million tourists by 2005.

The public and private sector are promoting the country's tourist industry in 2 specific categories: ecotourism and historical/cultural tourism. The main draws are the Amazon rain forest and high Andes, including the Colca Canyon, the world's deepest, and archaeological sites such as Machu Picchu, considered to be the "lost city of the Incas."

With the exception of Banco de Credito—Peru's largest financial institution (US$8.5 billion in assets)—nearly all the financial sector has fallen into foreign hands. The financial system has been on somewhat shaky ground since 1997, with a number of bank mergers or failures. The number of banks in the system fell from 25 in 1998 to 16 in 2001. There were 2 interventions by the government to save banks in late 2000, and authorities say the system is solid although it might not be flush with cash.

Nearly all retail is concentrated in Lima and, with a few important exceptions, is controlled by foreign capital. The 2 major department store chains, Saga and Ripley, are Chilean-owned and one of the 2 supermarket chains, Santa Isabel, belongs to the Dutch conglomerate Ahold. The other supermarket, E. Wong, is Peruvian-owned and solid. Supermarket sales, however, account for less than 10 percent of overall sales nationwide. In the past 10 years, Peru has attracted international franchises from apparel to gas stations and fast-food chains, including McDonald's and Burger King. The most successful franchise in terms of profit has been Dunkin' Donuts.

Peru has no territories or colonies.

perfect information on the products manufactured in peru
3
Dontae Johnson

INteresting article. I am curious to know more about the family planning program that Fujimori inplemented, as well as, the forced methods used to achieve the goals. It seems unreal somebody could have forced people to get tubal ligations and vasectomies.
5
Ana Maria

this amount of information is very satisfying and answers all my questions and for that i thank you. :)
8
jake

this helps me a lot because I'm doing research on Peru, and didn't have many options! =)
10
Caden

I wanted to know what they make copper into. Otherwise it is a good website.