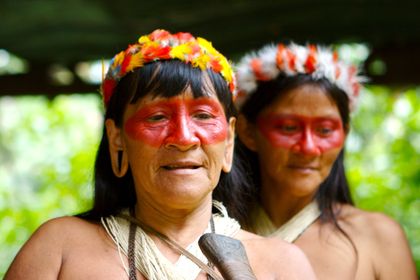 Despite years of promises and billions in social programs, the bulk of Peru's population (54 percent) lives in poverty, according to the CIA World Factbook. Of the poor, the UNDP estimates that 19 percent live in "absolute poverty," meaning they survive on less than US$1 a day.

The contrasts between rich and poor are clearly seen in Lima, the capital, which has more than doubled in size in the past 2 decades. The majority of the capital's population live in shantytowns, known as pueblos jovenes locally, most of which are perched on barren sand dunes near the Pacific coast or on rocky outcrops in the foothills of the Andes. The shantytowns surround upscale neighborhoods, most of which are a cross between Miami homes and Spanish villas.

Income distribution continues to be extremely skewed, with the top 10 percent of the population controlling 35.4 percent of the nation's wealth, while the bottom 10 percent controls just 1.6 percent. The gap is seen

in access to basic services. While the wealthy neighborhoods have had access to potable water, waste removal, paved roads, and electricity for decades, these services are newcomers to most shantytowns. In fact, only in the 1990s did most of Lima receive electricity, and water for many areas is still brought in by cistern trucks.

The literacy rate in Peru is 88.7 percent and education is universal and free. An estimated 7 million children and adolescents are of school age. Of these numbers, the U.S. State Department estimates that 6 percent of children and 17 percent of young people either never attend or drop out of school. The high school drop-out rate in rural areas is more than 50 percent. An estimated 750,000 students attend nearly 50 state and private universities.

The government tried to offset many of its social problems with programs, but these programs were aimed more at ensuring voter support than solving the root causes of the problems. In 2000, 60 percent of rural Peruvians and 40 percent of urban residents were receiving some sort of government aid through community soup kitchens, food give-aways, or school-based breakfast, lunch, or health-care programs. The incoming government has pledged to maintain most of the programs, but says it will de-politicize them.

The World Bank and International Monetary Fund estimate that the Peruvian economy needs to grow by 6 percent annually over a sustained period of time if the country is going to adequately reduce poverty levels. Compared to neighboring Bolivia and Ecuador, Peru is not doing poorly, but it lags well behind Chile and Colombia in terms of per capita income and access to goods and services.

great,
yet another great one on peru for my project.
thanks
2
schoolstudent

Very helpful for my Project on the economy of Peru. Cheers :)
3
Sarah

This was a pretty good resource in order to help me explain the disparity of wealth in Peru. Thanks:)!
4
Crystal

This was a great resource for me to explain the disparity of wealth in Peru :)
5
Olivia

This was very helpfull for my project thanks :)It explained how poor their county was and their wealth!
6
Brittney

This really helped me with my project on the poorness of Peru. Thanks :)
7
Rafi

Very helpful in my Spanish homework as we had to find a Spanish speaking country with poverty. This article was extremely helpful!
Thanks would rate 5 stars :)
8
Angie

Super helpful for a group project on Peru, many thanks :)
9
John Smith

The information provided here is inaccurate in 2019. This information is almost 20 years old! A lot has happened only in the past 5 years in Peru.
10
Gavin Brown