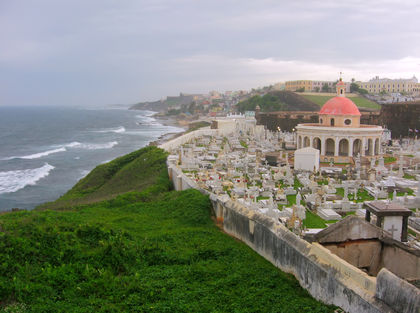 Puerto Rico, an island situated between the Caribbean Sea and the Atlantic Ocean, lies just east of the Dominican Republic. With an area of 9,104 square kilometers (3,515 square miles), Puerto Rico is almost 3 times the size of the state of Rhode Island. As an island commonwealth with a coastline of 501 kilometers (311 miles), Puerto Rico shares no borders with other nations. San Juan, the capital, is located on the northeastern shore of the main island; there are also 3 small islands included in the Commonwealth: Vieques and Culebra to the east and Mona to the west. San Juan's location makes it one of the Caribbean Sea's most valuable ports. The Mona Passage, off Puerto Rico's west shore, is also a crucial shipping route to the Panama Canal. Major cities include Guánica, Playa de Ponce, and Guayanilla, all 3 along the southern coast, in east-to-west order. Puerto Rico's most important cities are port cities, vital to the Puerto Rican economy.

Puerto Rico's colonial history with Spain resulted in a racially mixed population (Spanish, African, and indigenous Taino), 85 percent of which is Roman Catholic. The population was estimated at 3,915,798 in July 2000, a growth of 10 percent between 1990 and 1999, according to the U.S. Census Bureau. People between the ages of 15 and 64 constitute two-thirds of the population, and people 14 and under make up roughly one-fourth. With an annual population growth rate of 0.56 percent as of 2000, the population is estimated to reach 4,117,633 by 2010. The average life expectancy of the population is 75.55 years.

Population growth is discouraged by the government, which supports family-planning programs and birth-control measures on the community and national levels. In the 20th century, large-scale migration to the U.S. mainland had slowed population growth and alleviated overcrowding, but since the 1990s there has been a growing movement of Puerto Ricans from the mainland returning to the island because of improved living conditions. The government also places high emphasis on education, which explains the high literacy rate on the

island (90 percent). Bilingual education measures are growing, and are the source of great debate on the island.

The population of Puerto Rico shows high concentrations in urban areas along the coastal lowlands. Several pairs of neighboring cities are virtually growing together due to urban expansion. For example, the capital and its surrounding areas have a population of more than 1.5 million. Still, almost 70 percent of the island's population remains rural.

With the government-run Operation Bootstrap, Puerto Rico began intensive industrialization efforts and strong economic development in the late 1940s and early 1950s. Investment incentives and tax exemptions also encouraged foreign investment in industry, and the island's labor force shifted from agriculture to manufacturing. The manufacturing sector also saw a rapid shift from labor-intensive industry (food, tobacco, leather, and clothing) to capital-intensive industry (pharmaceuticals, chemicals, machinery, metal products, and electronics). Industry now accounts for 45 percent of the island's GDP, while manufacturing accounts for almost three-fourths of that percentage. Many manufacturers are offshore extensions of U.S. companies, importing raw materials mainly from the United States, adding value with low-cost labor, and then exporting products back to the United States and other wealthy nations. Some 161 of the Fortune 500 companies have facilities in Puerto Rico. Major U.S. companies operating in Puerto Rico include the Pepsi-Cola Bottling Company, K-Mart, Walgreen's, Woolworth's, and Kraft General Foods.

The construction industry in Puerto Rico is one of the most rapidly growing components of the economy, particularly in response to heavy expansion in manufacturing and tourism. In 1994, Governor Pedro Rosello backed a US$7.5 billion construction project with aims to improve the country's image and tourist appeal. Large sums of money have been allocated to the construction of hotels, roads, and infrastructure, and the renovation of existing tourist industries. The Transportation Infrastructure Finance and Innovation Act of 1999 approved US$1.7 billion for the construction of a rail system called Tren Urbano. As with most industries, the United States backs the majority of the construction companies, and most materials and machinery parts are imported from the United States as well.

With visitors spending over US$2 billion each year, tourism has blossomed as the fastest growing industry on the "Enchanted Island" (the tourism marketing slogan). Puerto Rico's attractive beaches and tropical climate are perhaps the island's greatest natural assets. Virtually all of the major cities are coastal tourist attractions; the most popular include San Juan, Ponce, Mayaguez, Bayamón, and Caguas, which together attracted more than 4 million tourists each year during the 1990s. Puerto Rico's uniquely blended African, Spanish, and indigenous Taino traditions have produced colorful and diverse cuisine, music, and customs that appeal to the international tourist. The island has also effectively developed its transportation network to enhance the tourism industry. Some 30 airports (domestic and international) provide easy access to a variety of locales on the island. Hotels, restaurants, and retail stores and centers have multiplied nearby.

Tourism produces 7 percent of the island's GNP and employs more than 60,000 islanders, a figure that is rapidly increasing. Hotels provide over 12,000 rooms, operating at full occupancy. Hotels built on the island enjoy a 90 percent local tax exemption while hotels built on Vieques and Culebra receive 100 percent exemptions. These exemptions also apply to condominiums, inns, theme parks, golf courses, marinas, and land used for other tourism-related activity. Largely due to the 1993 Tourism Incentives Act, the government is repaving roads, erecting signs and billboards around cities, financing a US$30 million facelift for the island's main airport, pouring money into cruise ships, and investing large sums of money in every aspect of the industry.

By far, the United States is the island's largest trading and financial partner. More than one-third of U.S. investment in Latin America goes to Puerto Rico. Banks, retailers, hotels, restaurants, airlines, and many other firms have capitalized on the island's economy and have taken advantage of the booming tourism sector. The U.S. monetary system and tax incentives are among many forces that attract international investment in Puerto Rican finances.

Local corporations own most commercial banks. Banco Popular is the largest one, with more than 100 branches. The government owns and operates 2 banks: the Government Development Bank (GDB) and the Economic Development Bank (EDB). There are also several foreign-owned banks and 2 U.S. banks on the island: Citibank and FirstBank. The Federal Deposit Insurance Corporation insures all banks, which are subject to U.S. banking regulations and federal controls.

Puerto Rico has no territories or colonies.

this really helped me on a project! There should be more sites like this one!It can be really useful when you can't depend on anything else :)
3
Dave

Here is some information about Puerto Rico and how maybe out model for High speed internet can benefit both us and the People of Puerto Rico.
4
Eda

I really like this website. It has all the information I mainly am looking For. I recamended this website to all my friends and family
6
Tavia

Yeah it helped me too! Everyone should use this website. Its understandable very organized and accurate!
7
sabrina

iLove this Website !. its really helpinq me on my class presentation [: im PuertoRican !.
8
noe

Very good site! Helping me greatly on my Spanish project for PR!
10
haley

This is a good site. It helps me with my Spanish paper!
13
Kayla

Wow, the best information I ever got for a report. They could've had way more information. But mi fished 2 parts of my 4 part report. love this info
14
maria

me puerto rican me go to puerto rico million times. AT night you can hear coqius. at coca falls you can climb and play in the water. it is really fun!
15
tasha

Thanx a bunch, im doing a project for school on Puerto Rico and this info helped me alot :)
16
john

From my obsevation puerto rico is a place to visit and have a look at nature. And i want to ask for person to visit puerto rico what does it require.
18
Carmen Bell

Omg,I did not know a lot of information about Puerto Rico this web side help me a lot, my friends from work always ask me questions about puerto rico now I know where to look for it.
19
Matthew

This is a super good site. I wished I used it for my Spanish Project
20
poop

HI this is a really good site, I would recommend this site to any body who would ask for information on puerto rico
21
Period

This helped me with my Spanish homework, it is a really good website. Credits to who made this website. Periodtt.