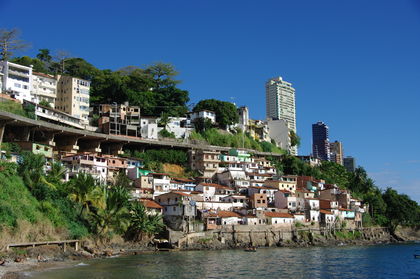 El Salvador, a Central American country slightly smaller than Massachusetts, borders the North Pacific Ocean between Guatemala and Honduras. It has a land area of 20,720 square kilometers (8,000 square miles) and a coastline of 308 kilometers (191 miles). Land boundaries in El Salvador total 545 kilometers (339 miles). It shares a 327-kilometer (203-mile) border with Guatemala in the northwest, and a 341-kilometer (212-mile) border with Honduras in the southeast.

Over the past 20 years the Salvadoran population has been subject to highly stressful conditions. A number of military coups (domestic takeovers of governments) in the 1970s and sham elections rigged in the army's favor diminished civilian confidence in the political system and spawned a violent guerilla movement (guerilla wars are fought by units with non-conventional military and political tactics). The 1980s were marked by a series of bloody conflicts between leftist rebels and right-wing paramilitary death squads who, with tacit support of the army, violently suppressed opposition. Over the course of the decade, 70,000 people were killed. Thousands fled the country, many coming to the United States. There are currently about 1 million Salvadorans living in the United States, many illegally or with uncertain legal status.

Mining currently plays a negligible role in the Salvadoran economy, accounting for just 0.3 percent of the GDP in 1997, with mineral production limited primarily to gypsum, sea salt, and construction materials such as limestone. While mineral deposits are thought to exist, there has been little attempt in the past 20 years to exploit them. The country had 2 gold mines in operation until the early 1980s: San Cristobal in Morazan province and El Dorado in Cabanas province. Both fell into disuse during the country's civil war. There has been some renewed interest in mineral exploration at the El Dorado mine. A joint mining venture between Mirage Resources, Bethlehem Resources, and Dejour Mines was launched in July 1993. Although San Cristobal is estimated to contain 200,000 tons of ore, including deposits of gold and silver, efforts have not been made to reestablish large-scale operations there.

El Salvador's manufacturing base was established in the 1950s. As regional markets began to open in the 1960s as a result of the Mercado Comun Centroamericano (Central American Common Market, CACM), the industry began to expand. There was significant growth in the output of capital goods and chemicals in the 1970s, but manufacturing contracted in the 1980s as a result of the war and recession . The CACM began to collapse, there were shortages of foreign exchange, and the manufacturing base declined. The industry rebounded strongly in the 1990s primarily as a result of growth in the maquila sector. However, this growth steadied somewhat towards the end of the last decade as the industry matured. Expansion was also slowed by competition, especially from Mexico, which, as a party to NAFTA, receives trade benefits from the United States. Almost a dozen manufacturing plants in El Salvador closed in 1998. As of 1999, no new ones had opened.

Over the last 10 years, the maquila industry has emerged as the largest producer of export revenue in El Salvador, boosting manufacturing to 22 percent of the GDP. Production and export revenues from maquila doubled between 1994 and 1998, going from US$650 million to US$1.3 billion. Offshore production has become more important than local manufacturing, employing around 50,000 people, 85 percent of whom are women.

New opportunities have arisen since the 1990s from the revival of regional trade, yet Salvadoran manufacturers have been hard pressed to develop competitive advantages. Failure on the part of manufacturers to modernize operations, which some have blamed on the high cost of investment, have left local manufacturers vulnerable to increased competition. Compounding this liability was the failure to achieve a NAFTA parity agreement with the United States. (NAFTA is the North American Free Trade Agreement.) By enjoying a "parity agreement" under NAFTA, El Salvador would have had the same free trade benefits as NAFTA signatories Mexico and Canada.

After the peace accord was signed in 1992, construction levels in El Salvador rose, with the building industry growing at an average rate of 6.7 percent a year between 1992 and 1997. Growth peaked in 1994 at 11.5 percent. Due to such rapid expansion, supplies of new property began outpacing demands. Construction began on 6000 new homes in 1997 alone. Many housing and commercial units built during this period have yet to be sold. In 1998, growth slowed to 3.7 percent, and in 1999 it further declined to 2.2 percent amidst allegations of corruption and charges that the sector was being used as a front for money laundering. The Camara Salvadorena de la Industria de la Construccion (Casalco, the construction industry association) is marketing newly-built homes to Salvadoran expatriates in the United States. The earthquakes that hit El Salvador at the beginning of 2001 will also stimulate activity in the construction sector.

El Salvador's service sector was the most dominant sector in the late 1990s. It accounted for 60 percent of the GDP and employed 55 percent of the labor force in 1999.

Although El Salvador has a coastline of over 308 kilometers (191 miles) and is home to ancient ruins, tourism in the country is limited. As of 2000, there had been no major initiatives launched to spur growth in the sector.

A primary component of the Salvadoran economy is the financial services sector, which has grown rapidly in recent years as the dependence on agricultural exports has declined. The sector registered an annual growth rate of 9.6 percent between 1995 and 1999.

In November 1998, the central bank in El Salvador increased bank reserve requirements by 3 percent. The increase was phased in over 5 months to reduce the available money supply and slow inflation. As a result, the average reserve ratio rose from 21 percent to 24 percent. Banks raised interest rates to make up for lost liquidity , and the economy slowed. In 1999, requirement rates were restored to their previous levels. A drop in interest rates could help quicken the rate of economic growth.

The rise in bank reserve ratios may also have been implemented to keep banks from overextending themselves. Bank failures in the 1990s lowered client confidence and small banks have suffered as a result, with many depositors transferring funds to the country's 3 or 4 largest institutions.

El Salvador has no territories or colonies.

I have a project and this helped me out a lot, THANK YOU

I HAVE A PROJECT 2 ON EL SALVADOR THANKS WHOEVER MADE IT!
4
Makayla

this was great!! i have a project due soon and this really helped!!
5
maria

I Have A Project On El Salvador Too And I Waited Till Last Minute And This Really Helped Thanks.
7
Lindsy

Thank you, so much in collage we have to do a report and this helped so much.
8
Gabby

Thanks for the help on my presentation it really helped me.
9
Gabby

Thanks for the help on my presentation it really helped me.
10
amanda

This is amazing information, thanks to who ever made it, might take a trip there too.