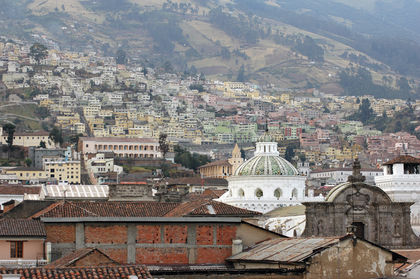 Located between Colombia and Peru on the west coast of South America, Ecuador has an area of 283,560 square kilometers (176,204 square miles) and a coastline of 2,237 kilometers (1,390 miles). The Galapagos Islands, which rest 960 kilometers (600 miles) to the west of mainland Ecuador in the Pacific Ocean are part of the Republic of Ecuador. Ecuador is slightly smaller than the state of Nevada. Ecuador's capital city, Quito, is located in the Andes mountain range on the equator, while Guayaquil, the country's most populous city, is positioned on the southern coastline about 210 kilometers (130 miles) from Quito.

POPULATION. An estimate in July 2000 put the population of Ecuador at 12,920,092, representing an increase of almost 26 percent over the nation's 1990 population of 10,260,000 and making the country the most densely populated in South America with 187 people per square kilometer (484 people per square mile). The birth rate in Ecuador for the year 2000 was 26.51 per 1,000 inhabitants, while the death rate the same year was 5.52 per 1,000 inhabitants. Population growth is expected to slow slightly to an annual rate of 1.6 percent between 2000 and 2010, bringing the population to 14.9 million by 2010. The percentage of people residing in urban areas has grown steadily since the 1960s and was estimated to

The Ecuadorian people are one of the more diverse groups in Latin America. The Ameridians, descendants of the groups who inhabited the area before Spanish colonization of the Americas, make up 30 percent of the population. The other ethnic groups include the mestizo (mixed Spanish and indigenous descent), Spanish, and black and account for 60 percent, 7 percent, and 3 percent of the population. Indigenous presence in Ecuador is the second highest in South America after Bolivia. The population of Ecuador is also young, with 70 percent of the country's inhabitants under the age of 35. Over the next 10 years, if population growth rate in Ecuador slows and life expectancy improves as anticipated, age distribution should even out slightly.

Sustaining the population is one of the Ecuadorian government's primary national concerns. Article 39 of the Ecuadorian Constitution addresses the issue of population, guaranteeing individuals the right to determine how many children they will have, while noting the accountability of the state to inform and educate individuals about the responsibilities that accompany this right. Because of Ecuador's strong Catholic influence with its emphasis on family, population control is a sensitive topic, and the government is reluctant to make strong statements on the issue. To ameliorate poor crop production and slow rural to urban migration, the government offers small grants to individuals to subsidize their farming practices.

The agricultural sector, which accounts for about 14 percent of the GDP and 30 percent of the labor force (1.25 million workers), is sustained by its largest export, bananas. Owing substantially to the cheap price of unskilled, unorganized labor (Ecuadorian banana workers are not unionized and earn roughly US$2-3 per day), Ecuador provides an attractive base of operation for fruit companies. The banana industry faced temporary difficulties with production in 1998 when El Niño destroyed much of the crop, but it has since recovered its position as the world's top exporter. A more stubborn problem facing the industry is the low price for bananas on the international market. Despite Ecuador's domination of the world banana trade, profits from the industry are declining and thus contributing to the nation's deteriorating trade.

Since 1970, the role of coffee in Ecuador's agricultural sector has diminished. Coffee was once the foundation of Ecuador's export economy, but it has been damaged by the global coffee recession , which has seen the production of coffee beans taper off over the past 30 years. From 1995 to 1999, production dropped from 150,000 metric tons to 57,000 metric tons. Nevertheless, coffee is considered a staple of Ecuadorian agriculture and is one of the country's largest exports after bananas. The production of cocoa beans, another of Ecuador's oldest cultivated crops, has remained stable throughout the last decade, probably because cocoa beans are cultivated for domestic consumption.

Ecuador produces more metric tons of sugar cane per year (7 million in 1999) than any other crop. Because of the immense demand for sugar and sugar-based foods, production barely guarantees the country's status as a net exporter of sugar cane. Much of the sugar crop is exported to neighboring countries, but almost as much is imported by Ecuador from surrounding Andean nations. This cross-border exchange usually occurs because of the changing demand for raw and refined forms of sugar in a country at any given time. Ecuador is striving to secure its position as an exporter of sugar by producing more than is needed for domestic consumption.

While agro-industries grow crops for export, many Ecuadorians live as subsistence farmers , selling or trading the food they produce to support themselves. Because of the multitude of fruits, vegetables, and grains that grow in Ecuador's climate, these small-scale farmers can trade to acquire any food they want. Commonly grown crops include rice, maize, potatoes, manioc, and soybeans. Indigenous Ecuadorians, whose heritage is deeply connected to the land for survival, make up most of the subsistence farmers. Their crops are sold at local markets and do not usually leave the country.

Ecuador is the world's second largest exporter of shrimp, which makes up 2 percent of the nation's overall GDP. The tools and production of the shrimp industry have changed over the past 2 decades in response to the forces of technology and international demand. The industry used to take its shrimp from the Pacific Ocean, but now shrimp farms are the prevailing method of production for export. Shrimp farms have a negative environmental effect on the mangroves and marine life in the ocean and have caused a serious decline in the wild shrimp population. This phenomenon, combined with the yellow head and white spot viruses that attacked Ecuador's shrimp in the late 1990s, threatens to destroy the shrimp industry if changes are not made to the system.

With abundant deposits of gold, silver, lead and zinc, Ecuador has great mining potential, but the country does not currently possess the financial resources needed to develop this industry. Mining accounts for only 0.5 percent of Ecuador's GDP, and much of this revenue is earned from black market sales. Nevertheless, mining is an emerging market in Ecuador and may become an economically vital factor with help from foreign investors.

Ecuador collected US$281 million in foreign capital from tourist receipts in 1996. The Galapagos Islands, famed for their unparalleled biological diversity and as the site of evolutionist Charles Darwin's studies, are Ecuador's leading tourist attraction. Other main points of interest include Quito, which is stationed almost directly on the equator in the Andean highlands; Cotopaxi, the world's tallest active volcano; and the Amazon rain-forest. Tourism is still a budding industry in Ecuador, and the low prices attract many new visitors each year. But political instability and rising crime in 2000 discouraged many visitors and affected tourism revenues.

A huge, unofficial role in Ecuador's service sector is the informal economy, which supports a fluctuating percentage of Ecuadorians according to the availability of official employment opportunities. Products sold in the informal sector include clothing, small appliances, food, artisan crafts, stolen goods, and any item in demand. Vendors set up booths in commercial areas, while others navigate the streets of large cities during rush hour and make sales to motorists. Because of its underground nature, it is hard to estimate the national income that the informal sector generates, but it is playing an increasingly important role in the economy as urbanization and access to common markets escalate.

Ecuador has no territories or colonies.

U.S. dollar replaced the Ecuadorian sucres as the official monetary unit in September 2000.

this is really good information to give anybody because it shows you just about everything you need to know for anything! good job
2
cole is poop

This website helped alot! I hope i get an A! Wish me lots and lots of luck! Great infomation! I would sugest this site to any one!
3
Tom

Cheers for the information , it has been extremely helpful.
4
adrian

The Indigenous population in Ecuador is the third highest after Bolivia and peru not the second.
5
fausto

Ecuador is the 2nd country in sounth america that produce and export petroleum afther Venezuela and has %60 mestizos %17 indigenous %3 bk %17 white %3 asian, this page it's vevy helpful, great job
6
Reedo

Thanks for the full information. The page badly needs to be updated, most references are at least 10 years old.
7
Thomas Davis

this was a very good article about ecuador. had a vast amount of imformation and helped me alot on knowing more about this beautiful country.
8
Adrian

Thank you nationsencyclopedia for making this website it is so helpful