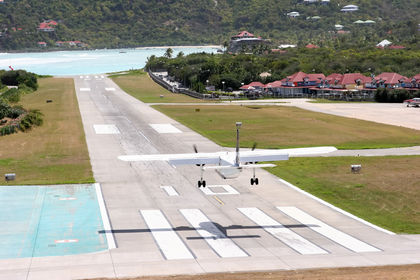 French Guiana, Martinique, and Guadeloupe are each separate overseas departments of France. Martinique and Guadeloupe are collectively referred to as the French Antilles, while the 3 countries together comprise the 3 Caribbean Departments of France. Located in northern South America, French Guiana is bordered by Brazil to the south and the east, the Atlantic Ocean to the north, and Suriname to the west. The total area of French Guiana is 91,000 square kilometers (35,135 square miles), rendering it slightly smaller than Indiana, while the coastline spans 378 kilometers (235 miles). Cayenne, the capital of the country, is situated slightly east of the center point along the coastline.

Martinique, a small island that lies between Dominica and St. Lucia in the eastern Caribbean sea, has a total area of 1,103 square kilometers (426 square miles). The capital of Martinique, Fort-de-France, is situated on the northern tip of the island. Martinique is about 6 times the size of Washington D.C.

Guadeloupe, which actually consists of an archipelago of 9 inhabited islands, is also located in the east Caribbean sea, to the north of Martinique, south of the British island Montserrat. The islands of Guadeloupe, including the French part of the island of Saint Martin that is divided with the Netherlands (whose southern portion is named Sint Maarten and is part of the Netherlands Antilles), have a total area of 1,780 square kilometers (687 square miles). The capital of Guadeloupe, the town of Basse-Terre, is located on one of the 9 islands with the same name. Comparatively, Guadeloupe is about 10 times the size of Washington, D.C.

In Guadeloupe, agriculture constituted 6 percent of GDP and employed 15 percent of the work-force in 1997, which equaled approximately 120,000. Agricultural produce includes bananas, sugarcane, tropical fruits and vegetables, cattle, pigs, and goats. Large sugar plantations that produce for both export and local consumption purposes continue to dominate, though many have been turned over to the cultivation of bananas. In 2000, the latter accounted for 82 percent of Guadeloupe's total exports, as opposed to 75 percent in 1998. In 2000, 121,758 tons of bananas were exported, 72 percent of which were purchased by the French metropolis. Sugarcane production—Guadeloupe's second most important export—declined by 6 percent (674,822 tons) in 2000 as a result of excessive rain in cultivating regions. Melons, the third largest agricultural export, have increased enormously in production in the past 6 years, rising from 2,561 tons in 1995 to 4,939 tons in 2000.

An estimated 36 percent of the total area of the islands of Guadeloupe are cultivable arable lands, while 10 percent are pasture and 15 percent woodland (1997). Offshore fishing is a traditional source of food, and the main catches include lobster, crab, and octopus. By the end of the 1990s, 11 fishing farms were registered in Guadeloupe and experiments are under way to catch and market sea bream and grayling fish in order to respond to growing demand.

In 1997, agriculture constituted 6 percent of GDP in Martinique and employed 10 percent of the workforce, which equaled approximately 100,000. Agricultural activity is centered on the production of sugar cane, pineapples, and bananas, mainly for industrial processing and export. In 1997, exports of bananas represented 40 percent of Martinique's total exports. Crops such as sweet potatoes, yams, manioc, beans, cabbages, and tomatoes are grown primarily for domestic consumption. The majority of farms in Martinique are privately run by small-holders . An estimated 48 percent of the total area of the islands of Martinique are cultivable arable lands, while 25 percent are forest, and 19 percent savannah (1997). Virtually all of Martinique's meat requirements are met by imports. Fishing of lobster, cray-fish, crabs, and clams are important for domestic consumption.

According to the CIA World Fact-book, recent statistics on agricultural contribution to GDP and employment in French Guiana are unavailable (nor are they available for other sectoral contributions to GDP and employment). In 1980, however, approximately 18.2 percent of the Guianese workforce engaged in agriculture. Cultivation in French Guiana, where the land is mostly rainforest, is limited to the coastal area. Only 0.18 percent of the land is thus cultivated, with production being dominated by subsistence crops such as rice, maize, and bananas. Sugar cane is also grown for rum production, which is an important, albeit declining, export. Land tenure in French Guiana is highly unequal, with 56 percent and 3 percent of all farming operations occupying 13 percent and 57 percent of the land, respectively.

With shrimp accounting for approximately 50 percent of annual export trading value throughout the 1990s, fishing is the most important agricultural activity in French Guiana. Unfortunately, shrimp exports declined by 26.4 percent from 1999 to 2001, due, in large part, to increases in fuel prices—the largest expenditure for shrimp fishermen. Such increases meant that fishermen could not conduct their activities as often as in the past.

The industrial sector in Martinique is very similar to the industrial sector in Guadeloupe, but slightly more important to the economy in relative terms. Industry in Martinique constituted 11 percent of GDP and engaged 10 percent of the labor force in 1997. Major industries include a cement works, rum distilling, sugar refining, dairy produce, fruit canning, soft drinks manufacture, mineral water bottling and a polyethylene plant. Additionally, a major oil refinery boasts a capacity of 16,090 barrels per day (2000). As of 2000, 5 industrial zones with generous tax and import duty exemptions have been established in order to encourage light industrial development. According to , an online encyclopedic organization, the industrial sector remains underdeveloped in spite of the legislated incentives. Martinique, like Guadeloupe, does not possess any mineral resources.

The construction industry, also dominated by governmental public works in Martinique, experienced considerable growth in 2001 when total cement production rose to 243.1 thousand tons from 237.5 thousand the year before. Much of this production was designated for the building of large establishments such as a hospital and a large court.

With the exception of a few small factories processing agricultural or seafood products and a few sawmills, manufacturing is virtually non-existent in French Guiana. A rocket-launching site owned by the European Space Agency at Kourou comprises one of the most important economic activities. As a result of the space center, which was built in Kourou in 1964 because of its proximity to the equator, ultra-modern buildings now dominate the city.

In terms of mining, bauxite deposits of 42 million tons and kaolin deposits of 40 million tons were recently discovered, though extraction is not economically viable in the near future due to the department's poor infrastructure. There are also reserves of silica, niobium, and tantalite.

Significantly, gold is mined by a dozen Guianese companies and over 100 small-scale miners. Official figures for the mid-1990s indicate an annual gold production of approximately 3 tons. In 2000, gold accounted for almost half of the department's exports. The United States has played an important role in boosting Guianese gold exports. In 2000, the United States, which did not import any Guianese gold in 1999, imported 7 million euros worth of gold.

According to an article that appeared in the French paper Le Monde Diplomatique, gold mining, which exploded in 1993 following the discovery of reserves in Maripasoula, has engendered considerable negative environmental impacts. Forest areas have been cleared, upsetting the ecosystem, and mercury waste, a threat to both fauna and humans, has been dumped in streams and rivers. The Cayode, a group of Amerindians, have protested the environmental destruction. To make matters worse, violent conflict has erupted between opposing gold prospectors, who often hire Brazilians brought into the department illegally to work for highly exploitative wages. The government has not been very receptive to those that are dissatisfied with the situation, as gold mining provides employment for many individuals who would not be able to earn a livelihood otherwise. A contentious debate as to whether certain areas with gold reserves should be set aside for eco-tourism has raged in Guianese politics throughout the 1990s. Thus far, the anti-restriction perspective of the miners has prevailed.

The French Antilles and French Guiana have no territories or colonies.

We are trying to solve a crossword puzzle and want to know What does Guadaloupe have five of?