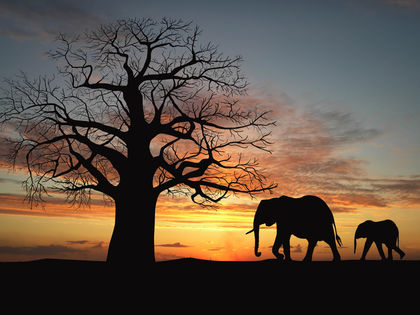 Republic of Kenya
Jamhuri ya Kenya

Located in east Africa, Kenya has a total area of 582,650 square kilometers (224,962 square miles), rendering it slightly larger than twice the size of Nevada. With a coastline of 536 kilometers (333 miles), Kenya borders the Indian Ocean to the east, Somalia to the northeast, Ethiopia to the north, Sudan to the northwest, Uganda to the west, and Tanzania to the south. Nairobi, the capital of Kenya, is situated slightly south of the center point of the country.

The population of Kenya is highly heterogeneous (diverse). Some of the major ethnic groups include the Kikuyu (comprising 22 percent of the population), the Luhya (14 percent), the Luo (13 percent), the Kalenjin (12 percent), the Kanmba (11 percent), the Kisii (6 percent), and the Meru (6 percent). There are also several other African groups (15 percent), in addition to a small population of Arabs, Asians, and Europeans. With 38 percent of Kenyans adhering to one denomination or another of Protestantism, and 28 percent practicing Roman Catholicism, the majority of Kenyans are Christian. An additional 26 percent of the population follow an indigenous religious system unique to east Africa, while another 7 percent are devoted to Islam. A plethora (a large amount) of indigenous languages are spoken in Kenya, though the only 2 official languages are English and Kiswahili. The latter, which acts as the lingua franca (common language) in east Africa, is a Bantu-based language with strong Arabic influences.

Like many sub-Saharan African nations, Kenya currently confronts an HIV/AIDS epidemic of massive proportions. At the end of 1997, conservative estimates by the World Health Organization (WHO) placed the total population living with HIV/AIDS at approximately 1,600,000. The United Nations Development Programme (UNDP) argues that HIV/AIDS is inextricably interrelated to issues of poverty. Poor women in urban areas, for example, are often forced out of economic necessity to engage in prostitution in order to survive. Prostitution, in turn, exposes sexual workers and their clients to high risks of HIV contraction. As such, any effective HIV/AIDS strategy on the part of the Kenyan government will have to address the dynamics of poverty in addition to gender inequality.

With its beautiful coastal beaches, wildlife, unique scenery, and history of relative stability, Kenya is the tourist hub of east Africa. Indeed, tourism is the country's second-largest foreign exchange earner, next to the agricultural sector as a whole. In 1995, Kenya received an estimated 785,000 tourists with earnings of about US$486 million, a slight decline from the US$501 million in earnings and 807,600 tourists of the previous year. Earnings from tourism further declined to US$448 million in 1996, though this figure still equaled about 65 percent of the combined revenues from tea and coffee exports. Europeans account for more than 50 percent of Kenya's tourists, while Americans account for less than 10 percent.

According to the U.S. Department of State Country Commercial Guide 2000, the relative decline in Kenya's tourism sector can be attributed to a high level of crime, disintegrating infrastructure, the eruption of ethnic violence in the early 1990s, and growing competition from neighboring countries. Reassuringly, political stability has returned and the government has offered various fiscal incentives to firms operating in the tourism sector, thereby counterbalancing the negative trends. Several multinational corporations are involved in the tourist sector in Kenya, including the Hilton International (British), the Intercontinental Hotel (Japanese), and Safari Park Hotel (South Korean).

The Nairobi Stock Exchange, which handles 61 listed firms, was established in 1954. In January 1995, the stock market, including stock-brokerage, was opened up for foreign direct participation, although there is a 40 percent limit on foreign ownership. Market capitalization has recently manifested considerable growth, increasing from US$1.89 billion in 1995 to US$2.08 billion in 1998.

Kenya has no territories or colonies.

OMG!! so useful thank you! :) It really helped me on the project i am doing on Kenya. Ifound it really hard but when i found this website it made it a lot easier. I was worried that i would not get it complete on the due date!:)
2
samantha

I THINK is a good website too and im learning alot THANK YOU;
4
Apostl PAUL

Great! great! great!, can you imagine the chiefs and DOs of Likoni know nothing about the population of people thy serve? after going in the DOs office for two days i thought of doing it my own way and the web has really helped me though i am not done with my project.