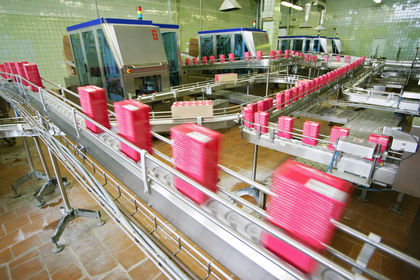 With industry contributing 18 percent of GDP (1998 est.), the industrial sector in Kenya is a relatively small, albeit important one. Some of the major industries include small-scale consumer goods producers (plastic, furniture, batteries, textiles, soap, cigarettes, and flour), agricultural products processing, oil refining, and cement. Industrial production is confined exclusively to the urban centers, such as Nairobi and Mombasa.

Until the early 1990s, the Kenyan government pursued a strategy of import-substitution industrialization (ISI) in the manufacturing sector. ISI seeks to stimulate local manufacturing capacity by blocking manufacturing imports from abroad. Although ISI has been effective in certain contexts, the neo-liberal (the ideology of the complete free market) international financial institutions have criticized it severely for facilitating the development of inefficient firms that do not have to compete with their foreign counterparts. The result is higher prices and poorer quality goods for domestic consumers. In accordance with the conditions delineated in the various SAPs, therefore, the government of Kenya has replaced ISI with a strategy of export-oriented industrialization (EOI). The latter is premised on the idea of stimulating manufacturing industries by engaging in competition and free trade. It has been criticized for not taking into account the possibility that highly competitive foreign manufacturers will depress nascent Kenyan firms if they are granted access to Kenya's markets through trade liberalization.

The production output of many manufacturing sub-sectors has also increased considerably throughout the 1990s. From 1991 to 1996, for instance, output of rubber products increased annually on average by 16 percent, plastic products by 12.3 percent, petroleum and other chemicals by 3 percent, metal products by 5.38 percent, electrical machinery by 7.11 percent, and, finally, clay and glass products by a whopping 46.85 percent. The cement industry, one of Kenya's most valuable, increased the value of its exports from US$15.2 million in 1992 to US$43.3 million in 1997. Other sectors did not fare so well, and annual average output for many actually declined. Beverages and tobacco declined on average by 0.13 percent, textiles by 6.9 percent, and clothing by 12.11 percent.

Although the Kenyan government does not maintain data on the value of Foreign Direct Investment (FDI), the U.S. Investment Promotion Center estimated that FDI totaled more than US$1 billion in 1994. Many foreign firms are located within Export Processing Zones (EPZs)—designated areas in which foreign firms are granted tax holidays and other concessions in order to attract their investment. There are a total of 14 EPZs in Kenya, and manufacturers are enticed with a ten-year corporate tax holiday and a 25 percent tax rate thereafter. Some of the major foreign manufacturers in the Kenyan economy include Bayer AG (German pharmaceuticals), British Petroleum, Cadbury Schweppes (UK confectionery/beverages), Coca-cola (U.S.), General Motors (U.S.), Colgate Palmolive (U.S. hygiene products), Mitsubishi (Japanese motor vehicles), and Mobil (U.S. petroleum products). While many praise FDI for creating needed investment and facilitating transfers of technology, others argue that it allows foreign firms to operate in isolation from the rest of the economy and that their profits are often expatriated (returned to the investor country).

The mining sector in Kenya, as a sub-component of the industrial sector, is negligible, though there are small deposits of gold, limestone, soda ash, salt barites, rubies, flourspar, and garnets. In 1991, mining only accounted for 0.1 percent of GDP, with this figure remaining exactly the same in 1996.

This is fantastic information. I am wondering whether there is any inventory of the industrial companies or factories at Industraial area in Nairobi city? Am a social researcher.
2
Sarah Moore

What is the citation for the tax rate increase stats?
3
Simon Gikonyo

I am a researcher and would wish to know whether all those industries in this sector will be willing to participate in KPMG top 100 survey.
4
ELDINOLD KIMANI

I am a food scientist undergraduate,I would like to know what is the % of food industries in Kenya and why do we have food insecurity and safety.
5
adit shah

Why there are no pencil making industries in kenya?
6
Argwings Kodhek

what the total number of industries in Nairobi city and that of the real estate housing units.