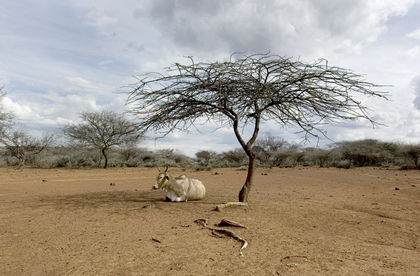 With 75 percent of the 9.2 million person labor force engaged in farming, the agricultural sector is the mainstay of the Kenyan economy. The sector contributes an estimated 26 percent of GDP, and generates 60 percent of the total foreign exchange earnings (1998 est.). The major agricultural products in Kenya include tea, coffee, horticulture, corn, wheat, sugarcane, dairy products, beef, pork, poultry, and eggs.

Tea production, which netted US$520 million in 1998, is Kenya's largest single foreign exchange earner. Coffee and horticulture are the other major agricultural export foreign exchange earners. With the economy so heavily dependent upon the exportation of agricultural commodities for its foreign exchange, however, Kenya is in a considerably vulnerable position. Adverse weather conditions, for instance, can completely affect the economy as a result of decreased production in any given year. Over the past 10 years, IMF statistics indicate that annual tea exports have fluctuated unpredictably, according, in large part, to weather conditions. In 1992, the total volume of tea exports equaled 169,000 tons; in 1996, this figure increased to 229,000 tons, though, in the following year, the total decreased to 206,000 tons. The Economist Intelligence Unit (EIU) November 2000 Report on Kenya estimated tea output declined by 5.3 percent from the year before, leading to a 6 percent decline in the value of exports. The cause of this decline relates to the debilitating drought that the country experienced at the close of the twentieth century.

Coffee production has similarly followed varied patterns of output according to weather conditions. In 1991, 83,900 tons of coffee were produced for exportation, with this figure increasing to 113,500 tons in 1995, and declining to 83,200 tons in 1996. To add to the problems of production instability, revenue acquired from agricultural commodity exports depends heavily upon international prices for a given commodity in a given year. For instance, if there is a considerable coffee yield by most coffee-producing countries of the world, international prices will accordingly decline as a result of a glut (excessive supply). The EIU estimated that coffee export production in 1999 would reach 85,000 tons, a considerable improvement on the 1998 output of 68,100 tons resulting from the improvement in the weather of the coffee-growing regions of the Central Highlands. At the same time, coffee revenue in 1999 showed little increase due to depressed world coffee prices. Coffee export earnings fell to US$125 million in the 12 months prior to the end of August 2000, compared with US$149 million in the same period of the previous year.

Horticulture—primarily the production of flowers, fresh fruits, and vegetables—is the fourth largest earner of foreign exchange and the fastest-growing activity in the Kenyan economy. Unfortunately, the recent drought led to a 6.4 percent decline in horticultural output in 2000 and a fall of 3.6 percent (US$188 million) in export earnings.

As a result of the scarcity of arable land, in addition to the tendency to use valuable land for the cultivation of export crops, Kenya must import large amounts of food in order to feed the population. The latter factor is inextricably related to the domination of large farms producing export crops in the agricultural sector. Such farms are more concerned with producing crops for profit than in producing food for local subsistence consumption. Kenya normally produces only 35 to 40 percent of its domestic wheat requirements, which are estimated at 650,000 tons per year. Adverse weather conditions in 1997 led to a drastic reduction in domestic wheat production, thereby necessitating 465,000 tons of wheat imports. Similarly, in the same year a deficit in maize production had to be rectified with 1.1 million tons of imported maize.

In 1993, Kenya's total arable land was estimated at 8 percent, while permanent pastures and forests and woodland respectively occupied 37 percent and 30 percent of the land. Several environmental problems currently threaten this land, including deforestation (erosion of forests), soil erosion, and desertification (drying of the land). Other environmental problems include water pollution from urban and industrial wastes and degradation of water quality from increased use of pesticides and fertilizers.

Iam a resident of agriculturally-fit region.I usually feel sad when i get information about my fellow kenyans dying due to hunger.I understand that there is food insecurity currently in the country,but this problem can be solved.The food sources have not been exploited,even i case we are under 50%.my point of view is mobilisation of the agricultural extention personel by the goverment to teach farmers on best and efficient methods of producing food.Iam happy about financial organisations on the greatest support to farmers.
2
Zebedee Taban

It's a wonderful article,just to add on to that,there other factors that affect agriculture in Kenya,infrastructure development in urban areas;poorly developed roads affect products in transit,products tend to spend more time in transit yet most agricultural products are highly perishable,hence they end up being wasted on the roads.Expensive cost of farming equipments/tools,this mostly affect small scale farmers who are the majority contributers in agricultural sector in Kenya.
3
Person

This is a very informative article. I really appreciate the effort and time put into this! This entire article has helped me with a research project I am currently conducting. Kind Regards!
4
ROSE NDWIGA

this article contains very valuable information. Howwever the dangers of growing too much of these cash crops needs to be highlighted to avoid leaning too much on the advantages. For example tea farming in the upper Embu county posed a lot of danger to the inhabitants of that place who hardly produce any food crops to sustain them for even a few months. They rely of buying food stuffs and when the weather conditions are not favorably and tea yields are poor, these people lack the resources to purchase food. This indicates that these people could easily experience drought and serious lack of food.
5
janet kibet

This article is the best since we can identify some problems and how to solve them relating to agriculture. The main problem facing the agriculture production in most rural areas is lack of technology for rural agriculture.This may be solved through the improvement of such technologies.
6
ted ogutu

Food insecurity in Kenya is caused majorly by poor infrastructure. People die in areas like Turkana yet food rots in farms due to lack of market. At the same time milk is poured out. Just make such areas accessible so that food can easily be transferred. People should take Agriculture seriously
7
Munene kimani

yes!!i agree that there is food insecurity in Kenya which is majorly caused by poor infrastructure but that's not the major cause what we generally need is development in the rural areas where people die because of lack of food and development can only happen where there is educated and more enlightened people who can think outside the box and develop their areas and even establish those big market places where food will b rotting.so education is the basic aspect to fight poverty and sluggish development...
8
Tfue

This information was was very valuable for my research task.
9
kibiwot justus kigen

we all understand that kenya depend on rain fed agriculture. issue food insecurity can still be alleviated through irrigation farming which is not possible the current rate of corruption in kenya. our leaders are self centered. very sad.