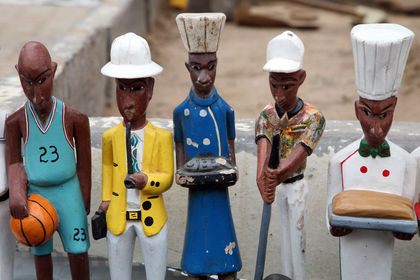 As an agricultural exporting and capital goods importing nation, Kenya routinely runs a balance of trade deficit that renders it highly dependent on loans and aid

to finance needed imports. The balance of trade deficit varies widely, depending upon, among other things, the market success of agricultural export commodities in a given year (as we have seen, this in turn, depends on both weather conditions and international commodity prices). In 1996, for instance, the deficit stood at US$73.5 million, while this figure increased dramatically to US$251.7 million in 2000—a year of endemic drought. With a large amount of foreign exchange reserves , however, which equaled US$875 million in 2000, Kenya has been able to reduce its total external debt significantly, from US$6.9 billion in 1996 to US$5.7 billion in 2000.

Kenya's principal exports include tea, coffee, horticultural products, and petroleum products. Exports designated to Western Europe, particularly the United Kingdom and Germany, have increased considerably from US$437 million in 1992 to US$672 million in 1997. This increase is dwarfed, however, in comparison to the increase of exports designated to African economies. In 1992, Kenyan exports to Africa equaled US$330 million, 5 years later, in 1997, this figure exploded to US$971 million. This phenomenal increase is largely the result of the East African Cooperation (EAC) economic treaty signed with Uganda and Tanzania in 1996. The EAC promotes regional economic integration through policies geared towards eventually harmonizing inter-territorial tariffs , removal of trade barriers, and, in the longer-term, currency alignment.

Kenya's major imports include machinery and transportation equipment (capital goods), petroleum products, and iron and steel ( intermediate goods ). In 1996, the total value of Kenyan imports equaled US$2,928 million, US$727 million of which came from capital goods and US$1,719 million of which derived from intermediate goods. Imports from Western Europe, once more particularly Germany and the United Kingdom, have increased significantly from US$715 million in 1994 to US$1,048 million in 1997. Imports from African countries only increased marginally from US$59 million in 1994 to US$136 million in 1997. The balance of trade surplus with Africa signifies Kenya's relative economic strength in the continent. Japan and the United States are also important exporters to Kenya, with each respectively exporting goods and services equaling US$245 million and US$261 million in 1997.

The Kenyan government has promoted policies of trade liberalization throughout the 1990s, reducing, for instance, the maximum tariff rate from 45 percent in June 1994 to 25 percent in June 1997. While the international financial institutions and Western governments in general tend to support trade liberalization, it may have negative effects for a country like Kenya that depends on agricultural exports in exchange for higher value-added capital imports. If Kenyan manufacturing firms cannot compete with their foreign counterparts, reduction of trade protection measures, such as tariffs, will simply lead to the retardation of the Kenyan industrial sector. The result would be further entrenchment of the agricultural sector in the economy, and thus the prolonging of the unequal trading patterns that sustain the country's severe balance of trade deficit. In such a context, the pro-trade idea that all countries benefit when each focuses on producing and exporting that in which they have a comparative advantage and on importing that in which they do not, seems hardly relevant.

Regional trading arrangements (RTAs), such as the EAC, may offer the benefits associated with trade, while providing a more level playing field since member countries are more likely to be at a similar level of development. Still, more relatively developed countries might benefit disproportionately, which seems to be the case with Kenya and the EAC. Kenya is also a member of the 21-country RTA, the Common Market for Eastern and Southern Africa (COMESA).

KENYAN POLITICIANS HAVE TO DERIVE THERE INTEREST IN AN TRADE ACROSS THE BOARDER SINCE MOST OF TRANSACTION ARE EITHER FREE OR OF LOW RATE HENCE BROUGHT THAT EFFECTIVENESS TO REVENUE TAXATION,ALSO THAT ANXIETY OF POLITICAL STABILITY FEAR INTERNATIONAL AND LOCAL INVESTORS
2
sad kim

What is the graphical representation of the exact trend of the kenyan balance of trade since 1997 to 2011?
3
JOSEPH KIMATU

Thebkenyan economy has kept on worsening,there is the need to find out what has led to this trend thus the govrnment should put up measures to control the level of imports
4
JOSEPH KIMATU