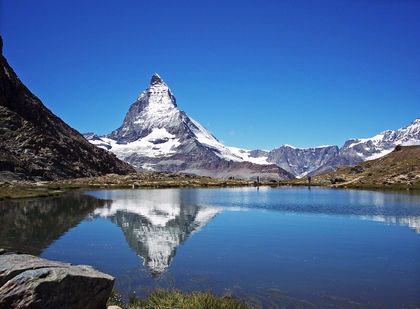 Located in west central Europe, bordered on the north by France and Germany, on the east by Austria and Liechtenstein, on the south by Italy, and on the west and south-west by France, this landlocked alpine country has an area of 41,290 square kilometers (15,942 square mi), making it slightly less than twice the size of New Jersey. The capital, Bern, is situated on the Aare River in the north-western part of the country; the largest city is Zürich in the north; other major cities include Geneva and Lausanne in the south-west, Basel in the north, and Lugano in the south.

The majority of the population, about 62 percent, lives in urban areas, and with the exception of Zürich, Geneva, Basel, and Lausanne, mostly in small towns. Most of Switzerland is mountainous and the population is unevenly distributed, concentrated in the valleys and the plains.

Switzerland's ethnic composition is complex and includes 3 major traditional language communities: German (about 64 percent of Swiss citizens), French (about 19 percent), and Italian (about 10 percent), along with the traditional Romansch (Rhaeto-Roman) language community (about 1 percent). Other ethnic groups include Spaniards, Portuguese, Turks, Albanians, former Yugoslavs, and others. Religious groups include Roman Catholics (46 percent), Protestants (40 percent), others (7 percent), and no religious faith is reported by 7 percent. The very slow population growth and the sizeable surplus of jobs in the economy (particularly in the services sector) have brought in many foreign guest workers from Italy, Spain, Portugal, the former Yugoslavia, and elsewhere. Guest workers are now estimated, with their families, to constitute nearly one-fifth of the entire population.

Switzerland has been the destination for many economic immigrants and asylum seekers, which has led to growing internal tensions. The fear of being overrun by foreigners has been a persistent Swiss topic in domestic political debate for decades. There have been many attempts to limit the number of foreigners by legislative means. In 2000, the Swiss electorate voted on a referendum to impose an 18 percent quota on the number of foreign workers in the country. They decided against the

measure, although the supporters of the quota argued that the influx of foreigners in the 1990s was equal to the population of the 6 smallest (and politically most conservative) Swiss cantons (confederate units).

Long regarded as the country of the bankers, Switzerland has a robust finance services sector and its most vibrant components are banking and insurance. Within the banking sector, commercial and private banks have the largest influence and growth potential. Swiss banks have been historically renowned for their stability, strictly enforced secrecy policies, privacy, personalized service, and reliability. The increase in world trade and industrial activity after World War II brought more business to commercial banks, particularly to their global operations. With the merger of the Union Bank of Switzerland and Swiss Bank Corporation in 1998, the new United Bank of Switzerland (UBS) is now Europe's second largest bank by total assets. Mutual funds and institutional investors have also vastly gained in importance, and represent very good growth prospects for commercial and private banks. The insurance industry is equally important for Switzerland, and the Swiss are by all measures the most heavily insured people in the world. There are over 100 insurance companies, approximately 10 percent of which specialize solely in the reinsurance business; of the latter, Rueckversicherung is the world's second-largest reinsurance company. Swiss insurance companies have been consistently very strong performers with steadily growing earnings.

A country of scenic landscapes and enterprising people, Switzerland has one of the most robust tourist industries in the world, with extensive facilities and centuries-old traditions, a sector that is one of the leading sources of foreign exchange and employment in the economy. Although the country is a humming crossroads between some of the fastest-growing regions in the EU, foreign visitors usually enjoy lengthy stays instead of simply transiting through. Foreign tourists spent US$11.355 billion in 1998 and over 69 million overnight stays were recorded in the sector offering slightly more than 1 million hotel, chalet, campsite, and youth hostel beds. Foreign tourist positive credit balance reached US$1.046 billion in 1998, and revenue from domestic tourists exceeded US$9 billion. Expenditures in the foreign tourist sector, including investments, surpassed US$10 billion. The country attracted the widest possible range of guests, from affluent elderly people visiting the spas to low-budget young backpackers trekking or "canyoneering" across its numerous mountains. Switzerland has a long list of world-renowned alpine (skiing and hiking) and lakeside tourist resorts, spas, and casinos; world-class cultural events; and many important international organizations and conferences, drawing huge numbers of participants, activists, and observers.

The structure of retail trade in Switzerland has been changing since the 1980s. Independent retailers are decreasing in number, giving way to self-service and discount stores and supermarkets, and a tendency toward specialization in food distribution has been particularly noticeable. Department and chain stores, consumer cooperatives, discount stores, and supermarkets account for a large part of local trade. The tendency in those companies is to deal in a wide range of products and services. Their centralized buying gives them a competitive advantage over independent retailers (they are given a discount by suppliers due to the vast scale of their purchases). Retail traders continue to streamline their operations in order to counter their stiff competition. Scanner cash registers for bar-coded articles are ubiquitous, and the use of electronic cards to ease payment transactions is growing (cards are issued, among others, by the Swiss Post, where numerous Swiss have bank accounts, and are becoming increasingly popular). In 1987, Swiss retail groups united to form an Electronic Payment System Association.

Yet, faced with the competition of large retail establishments with nationwide coverage, individual retailers also set up organizations to provide wholesale purchasing, importing, and other services. Functioning as cooperatives, most of these small retailers' buying groups and associations operate in the foodstuffs business but also in textiles, leather goods, sports articles, pharmaceuticals, toys, and hardware. Home shopping, or the direct sale from a private location, is becoming increasingly popular and has recorded enormous growth. The turnover for direct sales companies has doubled after 1995. The home-shopping boom has reached a record high and products sold range from Tupperware to lingerie to new recipes and cleansing agents. More than 5,700 salespeople are members of the Swiss Association of Direct Marketing Companies (VDF), mail order companies not included. They can count more than 1 million client-contacts yearly, generating a turnover of US$195 million (in 1998). Most of the products sold at "Home Shopping Parties" are top quality and innovative and cannot be found at retail stores. The advantages of home shopping are the advice offered by the sales persons, the relaxed and friendly atmosphere of the private location, the combined shopping and meeting friends experience, and the possibility of testing the products on the spot.

Switzerland has no territories or colonies.

Embassy of Switzerland in the United States. <http://www.swissemb.org> . Accessed August 2001.

WHAT ABOUT THE CLIMATIC CONDITIONS OF SWITZERLAND?
I ALSO WANT TO KNOW ABOUT SWISS BANK.
2
Geoffrey Kingu