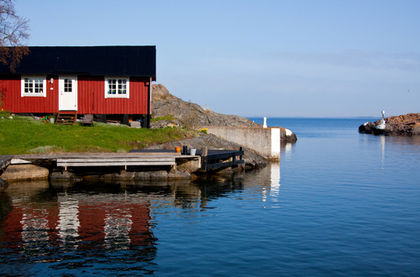 Located in northern Europe, in the eastern part of the Scandinavian peninsula, Sweden is bordered on the west and northwest by Norway, on the northeast by Finland, on the east by the Baltic Sea and its arm, the Gulf of Bothnia, On the southwest, Sweden is separated from Denmark by the Skagerrak, Kattegat, and Ôresund straits that connect the Baltic and the North Seas. The fourth largest country in Europe, Sweden has an area of 449,964 square kilometers (173,731 square miles), slightly larger than California. The area also includes 39,030 square kilometers (15,070 square miles) of inland water pools, mostly lakes. The capital city of Stockholm is situated in the southeast, on waterways and islands between Lake Malaren and the Baltic Sea. Other major cities include Göteborg in the southwest; Malmö in the south, and Uppsala, Linköping, Ôrebro, and Norrköping in the southeast.

The population of Sweden was estimated at 8,873,052 in July 2000 with an annual growth rate of 0.02 percent. The immigration rate is 0.86 per 1,000 population. Population density is one of the lowest in Europe, with about 20 persons per square kilometer (52 per square mile). Due to the cold northern climate, the great majority of the population lives in the south, especially in the central lowlands and the coastal areas. Large parts of the north and the mountains are very sparsely inhabited. Some 83 percent of Sweden's population is urban. The population, as in most of Europe, is aging, and with a high life expectancy of 79.58 years at birth (76.95 for men and 82.37 for women). The median age increased to 41 years in 1999 from 38.4 five years earlier. Some 17.2 percent of the population is 14 years old and younger, and 18.7 percent are 65 or older. The fertility rate was 1.53 children per woman, far below the replacement threshold of 2.1. In 1999, polls showed that more young and educated Swedes were prone to leave their country and settle elsewhere than were their counterparts in most of western Europe.

Like the other Nordic countries (Denmark, Finland, Iceland, and Norway), Sweden is still ethnically homogenous (similar). Its population is Scandinavian of Germanic descent. Most Swedes speak English and have cultural and family ties to the United States. Minorities include a small number of ethnic Finns and about 17,000 semi-nomadic Lapps (Saami) in the north; there are also more than half a million first generation immigrants, including Finns, Norwegians, Danes, former Yugoslavs, Greeks, Turks, Iranians, Chileans, and others. In the 1990s, Sweden received a large number of refugees from the war in Bosnia and Herzegovina and Kosovo (the former Yugoslavia), and since the mid-1980s, it also has received numerous ethnic Kurdish immigrants from the Middle East. Some 87 percent of Swedes are Lutherans, and there are small numbers of Roman Catholics, Orthodox Christians, Baptists, Muslims, Jews, and Buddhists.

Historically, Sweden's social welfare system has been extensive, insuring that all citizens receive old-age pensions, health and unemployment insurance, and

As in most of the industrialized world, the Swedish economy is becoming increasingly service-based, with more than two-thirds of GDP formed in that sector, and the role of finance and banking dramatically increasing. Retail is a traditionally strong industry, and tourism is also gaining ground with the increasing affluence of the Swedes and the growing interest of foreign visitors in traveling in the country.

Financial institutions in Sweden, both banking and capital-market ones, are well developed and stable. In addition to Riksbanken, the central bank, there are 2 types of banks, joint stock (commercial) and savings banks. Several "member-banks," formed as economic associations, also operate, but generally all banks are entitled to activity in all areas of the industry. In 1986, Sweden opened its borders to 12 foreign commercial banks, allowing them to open branches offices in the country, and they have since focused on business services. In 1990, all restrictions concerning foreign ownership of Swedish bank stock were abolished, though the banks' activities are subject to close supervision to insure that all necessary standards are met. According to the law, financial statements are audited only by internationally recognized auditors. The largest banks in the mid-1990s were Nordbanken, Skandinaviska Enskilda Banken, Svenska Handelsbanken and Foreningssparbanken (Savings Bank Foundation). American institutions Citibank and GE Capital Bank were also in operation.

Many Swedish banks suffered losses in the early 1990s due to recession , the increased competition generated by deregulation of the sector, sharply expanded lending, especially for real estate (mortgages), plus high inflation in the second half of the 1980s. In 1992, the government guaranteed all commitments of banks and mortgage lenders to their depositors and investors, establishing a Bank Support Council to manage a bank assistance program. Following EU directives, the government guarantee was replaced in 1996 (after Sweden's accession to the EU) by a bank deposit guarantee.

Since the mid-1990s, following global consolidation trends, the number of banks in Sweden was reduced through mergers. The largest merger was the 1998 deal between Nordbanken and Finland's Merita that formed the huge MeritaNordbanken Group. The deregulation of financial markets encouraged many foreign banks to enter Sweden. Credit Lyonnais of France was one of the leaders, although competition in Swedish retail banking forced it to sell its operation to the Trygg-Hansa insurance group in 1997. There were 32 commercial banks doing business in 1999, 15 of which were foreign subsidiaries. Smaller "niche banks" have also emerged (like "dial-in" banks for services by telephone), and all major banks are offering virtual services through the Internet. In 1999, 3 out of the top 4 Internet banks were Swedish. All major banks offer online services, and almost 40 percent of the Swedes conducted their financial transactions at least partly online in 2000, making the country, along with its Nordic neighbors, a leader in Internet banking. Swedbank's Internet system was named the best in Europe in 1999 and proved so convenient that Swedbank was also able to sell it to Norway's Sparbank 1.

Four of Sweden's major commercial banks plan to start a joint system for electronic stock trading in the hope of taking some customers away from the well-established OM Stockholm Stock Exchange by offering trading services on weekends, and eventually, around the clock.

Long considered underdeveloped, the Swedish venture-capital sector finally began to grow dramatically in late 1998 and 1999 thanks to the Internet and high-tech stock boom. It was badly hit by the meltdown in information-technology stocks in late 2000. Probably one-fifth of the 140 venture capital firms existing in late 2000 will either merge, close down, or leave the country. The remaining venture-capital firms will shift resources, possibly meaning that less capital will be available for new startups and expansions in 2001-2002.

The Swedish retail sector has been traditionally strong. It is following European retail trends, with large stores and shopping malls replacing the small traditional retailers, although to a lesser extent than in Continental Europe, given the smaller size of the market. New forms of retailing have benefited vastly from improvements in consumer confidence, a rise in earnings, and an expansion of employment. Furthermore, the reduction in value-added tax (VAT) on food since 1995, and Sweden's entry into the EU the same year, led to a fall in many prices. In 1998 and 1999, consumer demand for cars and audiovisual and computer equipment boosted the volume of retail trade to nearly 6 percent higher than in the previous year. By far the best known name worldwide in Swedish retail is IKEA, the furnishing retailer that registers 53 percent of its sales and 26 percent of its purchasing in the euro zone. IKEA also has a very strong presence in the U.S. Another strong retailer is Apoteksbolaget, a state-owned chain of pharmacies with a monopoly on the sale of all prescription and non-prescription medication.

E-commerce is already widely established, and online revenue as a share of total retail revenue is the second highest in the world after the United States. A growing number of Sweden's online retailers, including Boxman, Europe's largest online CD music and video retailer, have expanded even beyond the domestic market and built up a presence in other countries in Europe. Direct marketing is also expanding, and well-established mail-order firms have emerged in the areas of beauty products (such as Oriflame), clothing, sporting goods and hardware. Telemarketing is still relatively rare, but the use of cable TV sales channels is increasing.

For decades, Sweden has had a tradition of government policy aimed at restricting alcohol consumption through a state liquor monopoly and high taxes at more than twice the British and more than 10 times the French and German rates. When Sweden joined the EU in 1995, the state import monopoly was discarded, but the distribution and retail market remained under government control and the Swedish government negotiated a temporary exemption from the EU regulations, restricting the amount of alcohol individuals can import into the country. The European Commission has objected to future extension of this exemption, and Swedes take advantage of short trips to Denmark and Germany to import large quantities of alcohol for domestic consumption, especially after the bridge and tunnel link to Denmark opened in 2000.

Tourism is not a traditionally important sector in Sweden, but it has been growing throughout the 1980s and 1990s, with most foreign visitors coming from Germany, Britain, and the United States. The tourist season has traditionally been confined to the summer months, but winter skiing holidays began to attract foreign visitors during the 1990s. The first direct charter flight between Swedish ski resorts and Britain was launched in 1997. Still, about 80 percent of the guests were Swedes and about 6 percent were other Nordic nationals. Most Swedes continue to prefer traveling abroad during the obligatory 5 weeks of vacation and the increasing number of special holidays. The Norwegian hotel chain Norlandia plans to build up to 5 new hotel and conference centers in Sweden to add to the 6 it now has in the country.

Sweden has no territories or colonies.

I really appreciate for the full information that states about Sweden. A wonderful country with stable and advanced economy.

I did like the article but it needs to be spiced up a little bit.
3
Susan

As an American, all I have reeling in my mind about Sweden, is that it's where the happiest people in the world live! On that note, this is a place I hope to one day visit, and in my bigger dream, live! Thanks for the info.
4
caitlin

thank you so much I did a report on Sweden and it helped thank you very much! :)
5
Keirsten Adamson

Thanks for the info. My family history is from Sweden. I was born here in the states but my grandma and grandpa migrated here yrs ago. Hence the name Uddholm. I so want to come and explore Stockholm and other areas there. Do you have Libraries?
7
Geoffrey Kingu

I.am looking for partners to invest in agriculture in my beautiful country Tanzania
Please well come and contact me