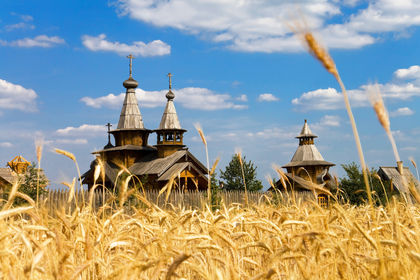 Ukraine is situated in Eastern Europe. It shares borders with Hungary, Slovakia, and Poland to the west; Belarus to the north; Russia to the north and east; and Romania and Moldova to the south. It also has a coastline of 2,782 kilometers (1,729 miles) on the Black Sea and the Sea of Azov. The total border length of Ukraine is 4,558 kilometers (2,832 miles) in length. The country's total area is 603,700 square kilometers (233,000 square miles), making Ukraine about the size of Texas. The capital of Ukraine is Kiev, which is located in the north-central region of the country and is also the largest city in Ukraine with a population of 2.6 million.

The total population of Ukraine was estimated at 48,760,474 in July 2001. The most notable recent demographic trend has been the decline in population. According to the Human Development Report (HDR) of 1996, the total population of Ukraine in 1994 was estimated at 51.7 million people. Hence, since 1994, the population has dropped by more than 3 million people, or more than 5 percent. According to estimates of July 2001, the population growth rate is-0.78 percent, the birth rate is 9.31 birth per 1,000 people, and there is a high mortality rate of 16.43 deaths per 1,000 people.

In 2001, 17.3 percent of the population was younger than 15 years, 68.57 percent was between the age of 15 years and 65 years, and 14.13 percent were over 65. The life expectancy at birth of the total population is 66 years—for males it is 60.62 years, and for females it is 71.96 years. The total fertility rate is 1.29 (which is below replacement level), and the infant mortality rate is 21.4 (per 1,000 children born). The leading factors of the country's low fertility are environmental pollution, poor diet, widespread smoking and alcoholism, and deteriorating medical care.

The ethnic distribution among the Ukrainian population is 73 percent Ukrainian; 22 percent Russian; 1 percent Jewish; and 4 percent are of other ethnic groups. The major religious groups are the Ukrainian Orthodox under the Moscow Patriarchate, the Ukrainian Orthodox under the Kiev Patriarchate, the Ukrainian Autocephalous Orthodox, the Ukrainian Catholic (Uniate), Protestant, and Jewish. The official state language of the Ukraine is Ukrainian, but in 1991, the Law on National Minorities gave individual citizens the right to use their ethnic language, and ethnic groups may establish their own schools. Other languages spoken in the Ukraine are Russian, Romanian, Polish, and Hungarian. However, potential students have to pass a Ukrainian language test, which is seen as a form of discrimination by the Russians.

Ukraine is one of the world's most important mineral producing countries, in terms of both the range and size of its reserves. There are nearly 8,000 separate deposits, harboring some 90 different minerals, of which about 20 are economically significant. About half of all the known deposits are under exploitation. Coal reserves in Ukraine amount to 47.1 billion tons. The annual domestic demand for coal as fuel is about 100 million tons, of which 85 percent can be satisfied by domestic production. Ukraine has oil and gas fields that meet 10 percent of her oil and 20 percent of her gas consumption, respectively. Ukraine contains natural gas reserves of 39.6 trillion cubic feet, but only about 20 percent of the country's demand is met by domestic production. Deposits of iron ore (estimated at 28 billion tons), manganese ore (3 billion tons), chalk and limestone (1.5 billion tons) are also large in Ukraine. The domestic industrial sector suffers from constant energy shortages and energy supply payment debts totaling about $792 million at the end of 1995.

Following independence, Ukraine's manufacturing sector has steadily declined, from 36 percent of the GDP in 1990 to 29 percent of the GDP in 1999. In 1994, the output of light manufacturing decreased by about 34 percent and engineering by 28 percent. Primary production and semi-manufactured goods registered lower output falls in 1995. One of the main results of this has been a move towards primary production in the Ukraine's industrial sector in recent years. Primary production consists of electricity, oil, gas, coal, and steel. This kind of production accounted for 53 percent of total industrial production in 1995, compared to 38 percent in 1990. Ukraine's manufactured goods have suffered greatly through the loss of former Soviet markets. Locally, their generally low quality has made them vulnerable to imports from the EU; at the same time, this low quality diminishes their viability as exports.

Since 1994, Ukraine has significantly increased its arms exports, from $20 million in 1994, to more than $100 million in 1995, to over $1 billion by the end of 1996. Ukraine merged 3 major arms export firms into a single company, Ukrspetsexport, in order to increase competitiveness in what is now its fastest-growing source of foreign exchange. The growth in the arms trade has been the result of the far lower costs of Ukrainian weapons than Western European or American arms.

The underperforming manufacturing sector is thought to be ripe for foreign investment. Growing domestic need for consumer goods , durable goods (appliances, etc.), and machinery, especially agricultural machinery, has encouraged investment across these sectors.

Since independence in 1991, Ukraine has emerged as the most stable and peaceful country among the former states of the Soviet Union despite all her economic and political crises. Policy makers actively welcomed foreign investors, business people, and tourists. Ukraine is developing as one of the most active and diverse tourist countries in the former Soviet region. The nation offers a broad range and rich tapestry of high level cultural, historical, national-folklore, and environmental tourism. Strategically, Ukraine is situated in immediate proximity to the great tourist centers of Europe and the Mediterranean and is opportunely connected to them by air, railroad and sea transportation routes. The most popular tourist destinations in Ukraine are Kiev, the capital city; the Crimea, which is popular for its warm climate and many spas; and the Carpathian mountains, with their alpine sports, and historic and ethnic cultural sites.

According to the U.S. State Department, nearly 11 million people visited Ukraine in 1999 (down from 12 million in 1998 and 14.6 million in 1997). Ukraine received over 6.2 million foreign tourists, placing Ukraine in the top 25 most visited countries of the world. The share of the tourism sector to GDP was estimated at 8.6 percent ($3.8 billion) in 1998. In Crimea alone, proceeds from tourism make up to 40 percent of the Crimean government budget.

Ukraine's tourist industry has great potential to develop into a major source of foreign exchange generation by the 2000s. In view of Ukraine's critical need to develop viable hard currency in the economic sectors, the government and tourist industry are seeking to upgrade hotel and resort facilities to high international standards, in order to maximize the long-term potential of the industry and sufficiently harness the nation's diversified tourist market and to try to attract foreign investors.

The high number of tourists has not led to a high level of tourist services, however. As of 2001, Ukraine still lacks a major international hotel. Most tourist services lay in the hands of owners connected to local political bosses, who have sought to keep control of this sector by excluding outside investment. Of all visitors, 75 percent arrive from Russia. Russians' low service expectations have kept Ukraine insulated from the relatively higher expectations of Western tourists.

The financial sector is relatively undeveloped in Ukraine. According to the report of the U.S. Embassy in Kiev, there are a variety of problems in this sector: setting up service projects requires legal endorsement; there is rampant corruption in the licensing and administrative approval process; the payments system is antiquated, with most Ukrainians having neither bank accounts or credit cards; and legal recourse in collecting on unpaid services is almost non-existent.

The Ukrainian banking system includes the central bank—the National Bank of Ukraine (NBU)—and an assortment of commercial banks. NBU responsibilities consist of monetary circulation, registration and oversight of commercial banks, and intervening in the currency market. As of January, 203 banks were registered in Ukraine, of which 165 banks are in actual operation, including 30 backed by foreign capital, and 9 with 100 percent foreign capital. With the exception of 2 state-owned banks,

Oshchadbank and Ukreximbank, the banks are joint-stock companies or limited liability companies.

Ukraine has no territories or colonies.

Oil and gas, machinery and parts, transportation equipment, and chemicals.