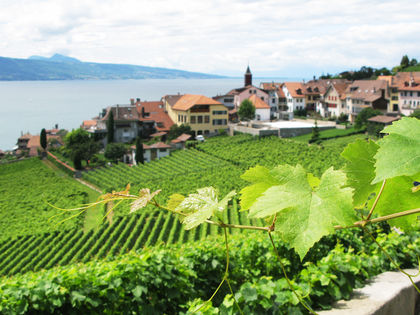 The Swiss soils, terrain, and climate do not favor agriculture particularly and farms are usually family enterprises,

mostly small in size. They produce cereals such as wheat and barley, root crops such as sugar beets and potatoes, and fruits such as apples and grapes. About 124 million liters (33 million gallons) of wine, at subsidized prices, are produced annually. Dairy products, such as cow's milk and world-renowned Swiss cheeses, make up a significant portion of the agricultural revenue. Livestock include cattle, pigs, sheep, horses, and poultry. After World War II, agriculture has lost its relative weight in the economy (though not its traditional clout in society or politics), and its preservation as a sector has been due largely to governmental intervention and support. To protect farmers and serve the national security goal to remain largely self-sufficient in food, the federal government has developed a complex system of protections effectively restricting imports of agricultural products, notably dairy and grains. High import tariffs and tariff rate quotas (limiting the merchandise quantities that can be imported from a certain country or generally) are maintained for most products which are domestically produced. Producers, particularly those in alpine and other difficult zones, are especially actively supported. Approximately 80 percent of gross farm income can be attributed to government intervention. Milk price supports are one of the principal staples of protectionism and that product's prices remain significantly higher than in the EU markets.

Since 1993, the Swiss system for protecting farmers has slowly begun a fundamental reform, due to the need to reduce costs for the budget and to the pressure from consumers and trading partners. Trade liberalization agreements require Switzerland to eliminate import barriers, reduce export subsidies , revise agricultural tariffs, and cut domestic support. Consequently, the Swiss agricultural sector will become less protected and more open to market forces and increasingly accessible to foreign goods. The government's position is that Swiss agricultural policy and regulations will be adjusted to be more in line with EU policies leading to reductions in administered prices. The process of agricultural policy reform started in 1993 when the prices of the politically sensitive dairy sector were first slightly reduced. The reform culminated in 1998, when the Parliament approved a new package of agricultural policy measures. According to the package, administrated prices will continue to decline and direct payments to farms will be gradually linked to their of use environmental production methods such as organic agriculture. On the other hand, trade agreements with the EU that lowered tariffs and other barriers to trade in agricultural goods will boost both exports of Swiss cheese and other delicacies and the imports of a range of EU-produced fruit, vegetables, and beverages into Switzerland.

During my recent visit to Switzerland I noticed that there was no cow dung on the pastures where the cattle were grazing around Geneva (13 to 24 October 2011)Can someone please explain to me how this is possible.I farm cattle in South Africa and found this most unusual.Thank you
2
melissa

Which agricultural products are scarce in Switzerland
4
this game doodoo

City folks wouldn't know, but alpine farming has its perks :) A cow produces eight to ten cow patties per day. Farmers get to smash the dried up little heaps of manure each fall and spring or the cow dung wouldn't properly integrate into the ground. Not only that, but the cows wouldn't eat the grass in the pasture come spring. They are kind of fussy this way.
6
Geoffrey Kingu

I am looking a market for sale pure honey in Swaziland please any one can .help.
Please contact me as soon as possible.
7
Promise chizara

Is fishery a viable agricultural practice in Switzerland?
8
Winston Porka

Hello, I need your professional help.I have a question-
I am a businessman, I live in Poland, I am engaged in cattle breeding - cows, gobies. I have over 200 animals.
I want to open a company in Switzerland. Please tell me if this is possible and can you help with this?
- Can I transport them with my documents and veterinary passports to animals by transport to a rented farm in Switzerland?