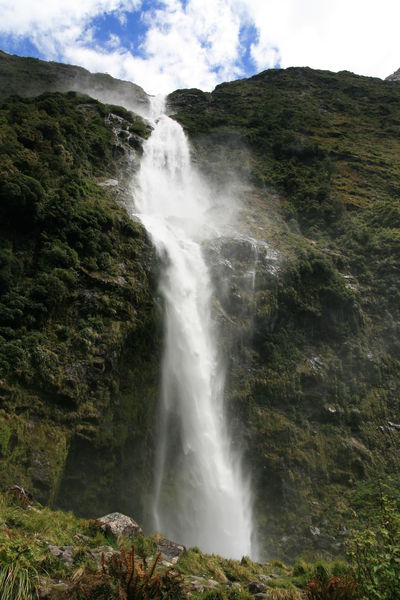 New Zealand is an archipelago (group of islands) located in Oceania, southeast of Australia. The 2 main islands are North Island (Te Ika a Maui) and South Island (Pounamu), with some near on-shore islands and smaller outlying islands including Chatham Islands, Kermadec Islands, and Auckland Islands. Its total land area is 268,670 square kilometers (103,733 square miles), making it about the size of the state of Colorado, with a coastline of 15,134 kilometers (9,404 miles). The capital, Wellington, is located at the south end of North Island.

In most years, New Zealand has a net migration loss of New Zealand citizens who move to Australia, the United Kingdom, and elsewhere, so one of the objectives of its recent immigration policy (1987) is to offset this loss with new migrants, preferrably those with skills and investment capital. While migrants from the United Kingdom continued to arrive as they had throughout the 20th century, a significant new migration stream came from Asia especially from China, Taiwan, Hong Kong, and Korea. These new populations, together with Pacific peoples who arrived in earlier decades, have resulted in an increasingly multicultural society. In 1996 about 72 percent of the population considered themselves of European ethnicity, down from about 81 percent 10 years earlier. The indigenous Maori made up nearly 15 percent of the population, Pacific people 6 percent, and Asians about 5 percent. The Asian population had increased the most rapidly, from only 1.5 percent 10 years earlier.

By most standards, New Zealand is sparsely populated, with an average of only 13 persons per square kilometer. This population is unevenly distributed, with three-quarters on North Island, and one-third in the largest city, Auckland. Over the years, Auckland has grown faster than the rest of the country, being the center of much manufacturing and, more recently, service industries. More than half of all migrants have settled in Auckland, and of new migrants from the Pacific and Asia, about two-thirds have settled there.

Products based on the forestry industry, including logs, processed wood, wood pulp, and paper, make up just over 10 percent of exports by value. In the past, logging has taken place in the indigenous forests of New Zealand, but the depletion of these forests and the strong political support for their conservation have resulted in an end to this practice. The timber industry is now centered on the exotic forests, mainly of pine, first planted during the depression of the 1930s, but much expanded from the 1970s onwards. The original planting was done by the state, but in recent years private companies have undertaken nearly all new planting. The largest forests are in the center of North Island, but smaller plantations are found in various parts of the country. The main destinations for forestry products are Australia, Japan, Korea, and the United States, and while a great deal of processing takes place in New Zealand, there is also a large trade in unprocessed logs.

New Zealand has an Exclusive Economic Zone (EEZ) of 1.3 million square nautical miles, an area about 15 times its land mass (the EEZ extends 200 miles from the coast and is the area in which a country has rights to economic resources such as fish). However, in much of this area the waters are extremely deep and not suitable for many of the commercially significant fish species. Nevertheless, fishing is still an important industry accounting for about 5 percent of exports, as well as supplying the domestic market. Each year the government assesses the maximum sustainable yields of each major species and sets a quota which is divided up between those who hold quota rights. The fishing fleet is made up of foreign-based boats as well as those based in New Zealand, which process their catch within the country. The indigenous Maori have some traditional fishing rights which are separate from the quota system, but in recent years Maori corporations have also become important in the commercial industry, having bought a company which owns about one-third of the fishing quota. A growing part of the fishing industry more generally is aquaculture, especially the cultivation of salmon, green-shell mussels, and Pacific oysters.

There is a diverse range of minerals found in New Zealand, although minerals make up only about 3 percent of exports (not counting the export of aluminum; see below). Gold has been mined since the 19th century and there is a small but steady production, as well as of silver, which is usually associated with gold. The highest value mineral production is of iron and steel, processed from black ironsands on the west coast of North Island. A nearby smelter provides iron and steel for the domestic market as well as for export. At the southern tip of South Island is a large aluminum smelter which processes bauxite from Queensland using power from nearby hydroelectric stations. The output from this smelter accounted for 4.2 percent of exports in 1999.

Manufacturing employed the full time equivalent of 234,220 people in 1999, but this number has fluctuated considerably through time. The processing of food products has been a significant part of manufacturing throughout the 20th century, but it was after World War II that many other types developed when the government placed high tariffs on most imports. As part of the economic restructuring from 1984 onwards, that process has been reversed with a rapid reduction in tariffs on most imported manufactured goods. Often these imported manufactures come from countries with low labor costs, and New Zealand manufacturing enterprises are not able to compete on the basis of price. In some cases New Zealand industries benefitted from lower input costs, although a considerable amount of the raw materials originated in the country, and there was little saving in the costs of production. This has resulted in the decline of some sectors such as clothing and footwear and the closure of the automotive assembly industry. The impacts on other sectors have varied. The processing of food has a comparative advantage related to the strength and diversity of agricultural production in New Zealand and the fact that most food processing takes place near a source of supply. Still there has been some restructuring of this sector related to technological changes and to changing company structures (e.g. the purchase of Watties Industries by the transnational company Heinz). New Zealand has established a reputation for the production of carpets, especially those made with high quality wool. Sectors supplying the construction industry have done well during the 1990s under conditions of rapid population growth, especially in the Auckland region. With its ongoing successes in international yachting, New Zealand is also establishing a reputation for the construction of both hi-tech sailing yachts and luxury leisure boats.

Consistent with a worldwide trend, tourism has been rapidly growing in New Zealand. In 1970, there were less than 200,000 visitors each year to New Zealand, but in 1999 this number surpassed 1.5 million. About half of these can be considered as tourists, the other half being involved with business, visiting friends and relatives and other activities (although even these are likely to be "partly tourists"). The economic impacts of tourism are great, although they are difficult to measure because tourism has an impact in many different economic sectors. In 1995 it was estimated that tourism provided about 58,000 full-time equivalent jobs directly and 60,000 indirectly. In the same year it brought in about NZ$4.3 billion (US$2.7 billion), more than all dairy exports (the largest agricultural export sector).

Tourism in New Zealand is based on a variety of attractions. Most generally the country is seen as having many natural assets, including mountains, subtropical forests, beautiful beaches, active volcanoes, geothermal pools, and geysers. Many also come to see the culture of the indigenous Maori, which is expressed in many ways, including dance and art. As international tourism has become more competitive and diverse, tourists tend to demand a broad range of attractions, so dynamic urban spaces may also be seen to be part of the total tourist experience. Thus, for example, the waterfront village in Auckland built to host New Zealand's defense of the America's Cup has become an important part of the tourist infrastructure, as has the spectacular new national museum in Wellington, Te Papa. Other forms of tourism are also expanding. Eco-tourists come to watch whales and dolphins or simply to walk in the forests. New Zealand has also become well known for adventure tourism with such sports as bungee jumping, white water rafting, and hang-gliding.

Since the economic restructuring which started in 1984, there has been considerable change in the financial sector. Most controls on the financial sector were removed and there has been a rapid growth in the money market since then, especially in relation to foreign exchange. New financial institutions entered the country, and foreign investment in the financial sector accelerated, as it did in other sectors. By 1999 there were 18 banks registered in New Zealand, only 1 of which was wholly New Zealand owned. About 70 percent of this foreign ownership was Australian. In 2001 the coalition government was set to introduce a state-owned enterprise "People's Bank" which would use the existing network of New Zealand Post outlets.

The Reserve Bank of New Zealand has several roles: 1) operating monetary policy to maintain price stability, 2) maintaining an efficient financial system, and 3) meeting currency needs. Thus, despite the distancing of the government from intervention in the financial system, the Reserve Bank may intervene to stabilize the currency or influence interest rates or the rate of inflation .

Wholesale and retail trade accounted for about 16 percent of GDP in 1999. During the 1990s the parts of the retail sector that grew most rapidly were food retailing, accommodation, hotels, liquor, cafes, restaurants, and takeaways. The 2 major factors in stimulating these sub-sectors were increases in tourist numbers and changing lifestyles among New Zealanders to favor more convenience foods, eating out, and diversity of food choice. These are trends common to other industrial countries. Other parts of the retail sector are also following international trends. The move to suburban shopping malls has taken place for several decades, but a relatively recent variation is the "mega-mall" with huge barn-like stores, each catering to a particular range of products (electronics, home furnishings, sports, etc.). At the same time, huge cut-price department stores have undercut traditional department stores. In New Zealand the most successful of these has been The Warehouse whose success is similar to that of Wal-Mart in the United States.

New Zealand has no territories or colonies.

Thank You! This information was VERY helpful on a Final I have been given to complete for school. I was given a project on New Zealand and I could not have completed it without this information. Thank You so much!
2
Marieka

Hi i'm a New Zealander, we nolonger have a 5 cent coin
3
john

hi im from new Zealand. this has been very helpful in my debating assignment. and do people from other countries really do assignments on new Zealand? thats so cool!
4
hello

Thanks so much! This was really helpful for my reserch paper. So specific!
6
Y.N.A

Thank you for the information ! :) It really helps me in doing our project of our chosen country NEW ZEALAND.
7
kimberly

it is a neat article and it gave me alot of information i needed thank you so much!
8
A Rahman Abu Mweis

I've read some information about Newzealand and make me like the country . What about immigration to the amazing country. Are there any conditions?
Please, let me know something about this idea . Thank you