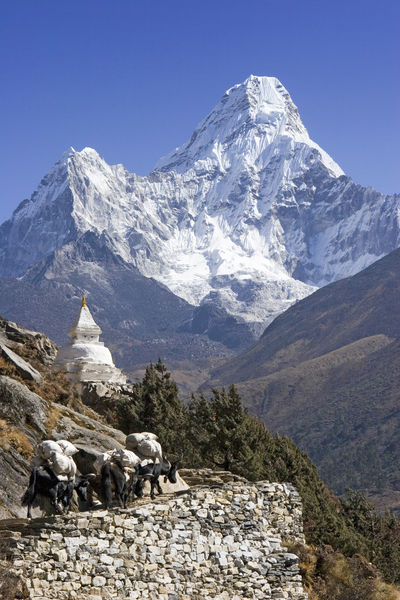 Nepal is a landlocked country in South Asia, bordered by India on 3 sides and by China to the north. It has an area of 140,800 square kilometers (54,363 square miles), a border of 2,926 kilometers (1,818 miles), and is slightly larger than Arkansas. Roughly rectangular in shape, Nepal can be divided lengthwise into 3 ecological zones from south to north: the fertile alluvial plains of the Tarai region, the mountains and valleys of the central Hilly region, and the inhospitable Mountain region, home to the Himalayas and the world's highest mountain, Everest. Nepal is drained by over 6,000 rivers which form the Karnali, Narayani, and Koshi river systems. Its capital, Kathmandu, is in the central part of the country.

Nepal is one of the few countries in the world where men live longer than women. Female life expectancy is 57.3 years, compared to 58.3 years for males. Forty-one percent of the population is aged 0-14 years, 56 percent are between 15 and 64, and only 3 percent are above 65 years of age in 2000. The population can be grouped by 3 major ethnicities: Indo-Nepalese, Tibeto-Nepalese, and indigenous Nepalese. In 1991 46.7 percent of the people resided in the southernmost plains of the Tarai region, 45.5 percent in the central Hilly region, and 7.8 percent in the northernmost Mountain region, but large-scale internal migration in recent years has led to overcrowding in the fertile Tarai region. The population of Nepal is overwhelmingly rural, with just over 9 percent living in urban areas such as the Kathmandu Valley. Population density stands at 175 people per square kilometer (453 per square mile).

Family planning in Nepal began in the late 1950s. An increase in government expenditure on family planning offices and door-to-door campaigns have contributed towards the adoption of family planning. In 1969, only 7,774 people used some form of contraception; this number rose to 419,950 by 1999. Difficulties in rural access to family planning services and cultural and socioeconomic considerations which favor large families continue to impede the implementation of a coherent population control policy.

In addition to the established Nepalese population, there are approximately 96,500 Bhutanese refugees in Nepal, 90 percent of whom are accommodated in 7 camps run by the United Nations Office of the High Commissioner for Refugees (UNHCR).

The largest manufacturing industries in Nepal produce jute, sugar, cigarettes, beer, chemicals, tea, vegetable ghee (clarified butter used in Indian and Nepali cooking) and oil, matches, soap, shoes, and processed leather. While industries such as jute, tea, and sugar use local raw materials, other industries have to import inputs from India. Mining is based on deposits of limestone (for cement), clay, garnet, magnetite, and talc. Surveys of other deposits have been sporadic and inadequate, and the difficulty of the terrain has limited development.

As early as 1952, the Nepalese government recognized that industrialization would have to take into account the severe limitations imposed by the country's geography. Cottage industries—the local production of traditional handicrafts—were seen as a way to engage the underemployed rural population and contribute towards export earnings. In Nepal, these industries have included pottery, handmade paper and products, woodwork, metal work, weaving, embroidery, and basket making, and draw on artistic traditions dating back centuries. However, even with the creation of Cottage Industries Training Centers across the country, many of these crafts have been in decline. Still, they contribute about 60 percent of industrial production, with the garment and carpet industries showing rapid growth since the 1980s and earning 84.3 percent of export earnings from countries other than India.

While the topography of Nepal has hampered economic development, it has also blessed the country with the matchless beauty of the mighty Himalayan mountain range in the north, rugged hills and valleys with cultural centers such as Kathmandu, and sub-tropical climes in the south that house rare species of wildlife such as tigers, rhinos, and gharial crocodiles. Ever since the successful ascent of Mount Everest in 1953, the tourist industry has been booming. For a country that was closed to the world until the mid-20th century, tourist arrivals of almost half a million in 1999 are impressive. A network of trekking agencies, hotels, and restaurants exists. There were a total of 708 hotels in 1999, with 31,355 beds. Tourism is an important contributor to the economy, constituting 3.6 percent of GDP and 26.3 percent of export earnings. Recognizing this, the state has supported the industry by building airports in otherwise inaccessible areas and opening up tourist routes.

Through the 1960s and 1970s, Nepal's allure as a tourist destination stemmed as much from the Himalayas as it did from its exotic appeal and the relatively easy availability of marijuana. Today, the industry is more broad-based, and mountaineering, trekking, white-water rafting, wildlife tours, cultural tours, and pilgrimages attract young and old, rich and poor alike. Almost a third of visitors are from neighboring India. The influx of tourists has been a strong influence on the Nepalese people. Ethnic groups such as the Sherpas, who escort mountaineering expeditions, have benefited considerably from their involvement with tourist activities. Culturally, Nepal has been exposed to western influence. Environmentally, the country has suffered adverse effects from tourism, though awareness of environmental issues is growing.

Tourism will continue to represent an important renewable resource, with government targets of a million visitors a year promoted through campaigns such as "Visit Nepal Year 1998" and "Destination Nepal 2002." Lately, pollution in the Kathmandu Valley, political violence, strikes in the hotel industry, and the royal massacre of 2001 have threatened to dent the number of tourist arrivals. Nevertheless, the potential for the expansion of tourism-related activities such as the provision of rural infrastructure and the local production of specialized food and equipment remains high.

The use of institutional financial services has been slow to spread in rural areas. Until the mid-1990s, most Nepalese banks were state controlled or owned. The country's first commercial bank, Nepal Bank Ltd., opened in 1937. The central bank, Nepal Rastra Bank, opened in 1956, and Rastriya Banijya Bank opened in 1966. Specialized financial institutions such as the Nepal Industrial Development Corporation (NIDC) and the Agricultural Development Bank (ADB) were also established to provide assistance to private industry and small farmers, respectively. These have had mixed success since traditional moneylenders still play a central role in village financial affairs. By 1990 the ADB had only granted loans to 9 percent of all farming families. Since 1984, foreign banks have been allowed to operate in Nepal as part of a strategy to encourage foreign investment. By the beginning of the 21st century, there were 14 commercial banks and 45 finance companies in Nepal.

Retail services in Nepal are mostly small, independent, family businesses. Large franchises do not exist and, with the exception of Indian-owned businesses, foreign investment is limited. Ethnic groups such as the Marwaris and the Newars are noted for their entrepreneurial skills and have a large share of the retail sector.

THE LIVES OF THE POOR AND RICH.

A rural family often lives under precarious conditions. In a typical village in the hills, a poor household relies on the produce from a small plot of land that has no irrigation facilities and is subject to erosion every year. A woman usually lives in her husband's house with his parents and siblings. The family house is made of stone and provides only 1 or 2 shared rooms. Cooking is done over an open stove in the main room. If they are fortunate, the family might own livestock such as cattle or chickens. Very little can be set aside from year to year, so they are unable to afford basic necessities. Such pleasures as a varied diet, clean water, fuel, medicines, decent clothing, and electricity may not be available. Education is considered a luxury that detracts from the time the children, especially the girls, can spend working. Water is drawn from the

local stream. Dependence on firewood has led to severe deforestation in the hills, and the women have to walk hours to forage. Health facilities are limited. If a member of the family falls sick, they may be carried along treacherous mountain paths for hours to reach a health post. Often, the men in the household leave the village in search of jobs to help support the family.

A prosperous family in Kathmandu may derive its wealth from an aristocratic legacy, or modern occupations such as business, law, or medicine. They may have houses in the urban center that can be rented out, and also own land worked by tenant farmers outside the Kathmandu Valley. Together, a wealthy married couple can earn upwards of US$6,000 a year. The easy availability of domestic workers from rural villages allows the wife to delegate household chores. The education of the children is perceived as fundamentally important in securing a future in modern Nepal. They study in private English-medium boarding schools and go on to complete college degrees abroad. Health services in Kathmandu are good in comparison to the rest of the country, but serious problems such as cardiovascular disease are entrusted to doctors in India or Thailand. Despite the irregular supply of electricity in the Valley, the family will have a range of electrical appliances and might have invested in a computer with Internet access. Their lives in Kathmandu are very comfortable, but they share with the poor the common problems of water and electricity shortages, frequent strikes, and the threat of political violence.

Nepal has no territories or colonies.

The area of Nepal is 147,181 square kilometers. you have mentioned wrong figure in this page. I request you to make required amendments.
2
Mohammad Ashraf Khan

The data needs to be updated.The length,width & perimeter should also be included.
3
Mohammad Ashraf Khan

The data needs to be updated.The length,width & perimeter should also be included.
4
keshab lohani

The area of Nepal is 147,181 square kilometres(56,000 square miles),but wrongly mention in above article.So it should be correct soon.