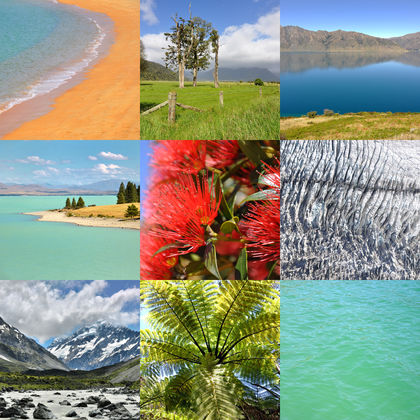 New Zealand has been considered an agricultural country since the 19th century, when the introduction of refrigerated transport allowed its sheep and dairy industries to expand to provide the United Kingdom with meat, wool, butter, and other agricultural products. Throughout the 20th century agricultural imports have remained important to the New Zealand economy, contributing 50 percent of all export income in 1999. At the same time, with increasing mechanization and the rapid growth of other sectors, the proportion of the population working in agriculture (including fishing and forestry) declined steadily from about 37 percent in 1901 to 9.4 percent in 1999.

Pastoral farming involves the raising of sheep, cattle, and more recently other animals such as deer and goats. An often-heard statistic is that there are 20 sheep for every person in New Zealand, and this was true in 1981 when there were 80 million sheep on the land. As other types of farming have become popular, the number of sheep has declined to 45 million, so there are only about 12 sheep per person now. There are also about 5 million beef cattle, 4 million dairy cattle, and 1.2 million domestic deer. Sheep and beef meats comprised 12.5 percent of exports in 1999 and are processed at plants in various parts of the country for shipment to many parts of the world, notably Europe and North America, but also increasingly Asia. Wool is also an important export, and while Europe is the traditional destination for this export, increasing amounts are going to China for processing.

In terms of export income, dairy products have the highest value of agricultural products, making up 17 percent of exports in 1999. Dairy farms are found throughout the country, but certain areas are particularly well known as dairying areas, such as Waikato and Taranaki in North Island. The supply of fresh milk to New Zealanders explains the location of dairy farms near larger towns, but most dairy production is destined for international markets, and farms which produce for this market must locate wherever production conditions allow. There are a range of dairy products exported, but the most important are butter, cheese, and milk powders. The market for these products is wide; for example, in 1999 there were exports to all continents, with substantial quantities going to Latin America and Africa.

After pastoral farming, the next most important type of farming is horticulture, the growing of fruits and vegetables. New Zealand's climate is suitable for a large variety of fruit ranging from temperate fruit such as apples, pears, peaches, plums, and cherries, to subtropicals such as avocados, passionfruit, grapes, and kiwifruit, as well as many other citrus fruits. In terms of area planted and exports sales, the 2 most important of these in recent years have been apples and kiwifruit. The latter were rebranded from Chinese gooseberry when New Zealand producers started commercial production, and then controlled most of the world supply of this fruit in the early 1980s. Since that time, many other countries have started growing kiwifruit, and the New Zealand industry had a difficult time in the 1990s with problems of oversupply and low world prices (at least compared to the 1980s).

Another important and rapidly growing part of the horticultural industry is grape growing, especially for production of wine. Although wine has been produced in New Zealand for 150 years, the growth of the wine industry has been most dramatic in the last 20 years. The land area in grape production has steadily increased and the areas of production have diversified so that drinkable wine is now produced near the northern tip of the country as well as in the south-central area of South Island. Favored grape varieties include cabernet sauvignon, merlot, pinot noir, and chardonnay, but New Zealand has become best known for its sauvignon blanc. The most important destinations for New Zealand wine are the United Kingdom and Australia.

Please give me the details of such organaisation who can give the opprrtunity in dairy industry in newzeland.
2
ravihtapa

this is inform i need to start my agree culture in India please suggests me how to growing fast growing. please help i want making rice Dal green vegetable ect
thanking you.
ravi thapa
3
sridhar

The people in Newzeland who are doing agriculture is very rich, But in India they are poor. Why?
4
Carlisa

New Zealand is well known in raising dairy animals and producing dairy products. And it's pretty amazing how they play a big role for this matters. It's nice to know that they're now engaging in horticulture. Well, this needs a knowledge in terms of maintenance for good quality of production and for better farming. Cheers to that!

Many Greetings
My name is Josphat Segera from Kenya, a graduate from a recognized university with a degree in Agricultural Extension and Eduaction.Due to scarcity of employment in our country am jobless but I have agricultural skills. I am pleased with your website and modern farming you are doing in your country. I wish I was there to gather more skills. Thumbs up for such.
Am kindly writing this seeking your advice on modern farming and on how I can employ myself through farming even if am languishing under poverty with lack of enough resources because I come from a poor family. For instance I have an idea of starting agribusiness mostly in horticultural crops so that I can employ others and also export the produce if possible. Our country has well environmental and ecological conditions for farming but since we are developing, resources are scarce. Another idea is of offering extension services to farmers so that to embrace farming.

So far so good am practicing small scale poultry farming and tomato production in small quantities.

Am humbly requesting for your advice on modern farming either in terms of knowledge, resources and if you in a position to help me gather skills from your county, I will appreciate so much.

Thank you in advance. Anticipating for your response.