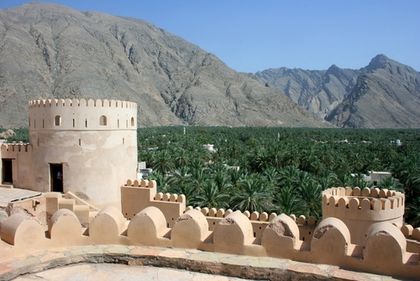 The Sultanate of Oman borders the Arabian Sea, the Gulf of Oman, and the Persian Gulf and shares borders with Yemen, the United Arab Emi-rates, and Saudi Arabia. Oman has an area of 212,460 square kilometers (82,030 square miles) and a coastline that totals 2,092 kilometers (1,299 miles). Comparatively, Oman occupies an area slightly smaller than Kansas. Muscat, Oman's capital, is located on the country's northeastern coastline.

In July 2000 the population of Oman was estimated at 2,533,389, of whom 2,006,311 were Omani and 527,078 were non-Omani. Large expatriate communities (communities of foreigners who have left their own country to live and work abroad) are very common in the Gulf countries on account of the oil and services industries. In Oman many unskilled expatriates from Asia are employed to carry out menial jobs, although this community has been declining slowly since 1996. The Omani population increases on average by 2.7 percent a year and, as a result, the country has a very young population.

The majority of the Omani population is Sunni Muslim, but a substantial number of people—including the ruling family—follow Ibahism, an offshoot of Shia Islam. Given Oman's long trading history, its population is a mixture of different races and even one of its most prominent mercantile families is of Hindu descent. Oman was a hub for the slave trade in the 18th and 19th century and although this practice was abolished in the 20th century, many continue to work for the families that previously owned their ancestors.

Employment in Oman is largely dependent on nationality. In the public sector , Omanis held 70 percent of the jobs in 1999, while in the private sector —which contains most of the lower-paying jobs—90 percent of the employees were from foreign countries. Rising unemployment in Oman has forced the government to realize that it can no longer pursue its policy of guaranteeing jobs to young Omanis entering the labor market and it is now focusing on increasing employment opportunities for Omanis in the private sector. Oman has seen a dramatic migration of people to the cities in search of better jobs; the largest proportion of the population is found in the capital city Muscat and in the larger northern towns of Suhar, Nizwa, and Sur.

With 2,092 kilometers (1,297 miles) of coastline running from the mouth of the Gulf in the north to the border with Yemen in the south, Oman has very rich fishing potential which has yet to be fully developed. There is a 200-mile exclusive economic zone which extends from Oman out to sea and over 150 species of fish and crustaceans have been identified in Omani waters ranging from tuna and crayfish to lobster and shrimp. Large amounts of lobsters are caught off the Masirah islands and off the coast of Dhofar, and they are exported to Saudi Arabia and the United Arab Emirates where they are in great demand. In 1998, approximately 26,940 Omanis were employed in the fishing industry and a total of 116,780 tons of fish were caught. The number of fish caught per annum has been slowly declining over the past 20 years due to pollution and the depletion of fish stocks. In response to this, the Omani government has put restrictions on the amount of fish catches. Lobster may now be harvested only twice a year. The annual fish catch remains at over 100,000 tons per year, and efforts to produce value-added , manufactured fish products are underway. Processing and packaging for export are key concerns, as is the use of better technology at sea.

Oman's position in a semi-arid climatic zone results in the serious problem of water scarcity. The government has been pursuing programs of improved water efficiency and water resource development and some far-reaching legislation has been passed through the government. In 1999 there were 48 dams all over the country that collect rainwater as well as a major project underway to decrease water consumption through the use of water-saving devices on taps. The government has also initiated a plan for the supply of water to Muscat up until 2010 that involves extending the existing pipelines. Two additional reservoirs have been built around Muscat at a cost of US$3 million.

Similar to many of the Gulf countries, the Omani industrial sector makes up a large proportion of GDP, accounting for 40 percent of it in 1999. However, Oman is not a typical Persian Gulf oil producer due to its small, scattered oil fields and, as a result, production costs are much higher per barrel than those in other GCC countries. The average Omani oil field produces one-tenth the volume per well that Saudi Arabia or Iran produce. Oil was not discovered in commercial amounts until 1962, much later than most oil-producing Gulf states. Oman is not a member of the Organization of Petroleum Exporting Countries (OPEC). (OPEC is an international organization of 11 developing countries which are heavily reliant on oil revenues as their main source of income. The current members are Algeria, Indonesia, Iran, Iraq, Kuwait, Libya, Nigeria, Qatar, Saudi Arabia, the United Arab Emirates, and Venezuela.) However, in the past Oman has cut production in co-operation with OPEC in an attempt to raise prices. Oman's oil production has wavered between 910,000 barrels a day (b/d) and 890,000 b/d since April 1999. The Omani government has announced a new 5-year plan which is to run from 2001 to 2005 and which aims to increase production to 1 million b/d. The bulk of Oman's 5.28 billion barrels in proven reserves is situated in the north and in the center of the country. In the north the largest fields are Yibal, Natih, Fahud, al-Huwaisah, and Lekhwair. The largest field is Yibal, producing 180,000 b/d and, together, these fields produce half of the total Omani oil production. The crude oil produced in the north is mainly light or medium crude and is found alongside natural gas. The oil fields further south tend to produce heavier crude and are usually not associated with natural gas.

With oil reserves amounting to 5.28 billion barrels, Oman has a further 17-year supply of oil if it continues to produce at 910,000 b/d. Since the discovery of oil, the oil and gas industry has been the catalyst of growth for the Omani economy, contributing approximately 37 percent to GDP each year and as much as 55 percent of GDP up until the early 1980s. In addition, oil provides 75.3 percent of state revenues. The oil industry is largely run by Petroleum Development Oman (PDO) which has a government majority ownership. PDO controls 90 percent of the country's output. Shell owns 34 percent of the company and operates the majority of Oman's large fields. In 1999, Oman exported 95.8 million barrels of oil to Japan, 65.6 million barrels to Thailand, 55.9 million barrels to South Korea, and 39.4 million barrels to China.

The gas sector in Oman is considered to be the cornerstone of the government's economic growth strategy and great efforts have been made to turn natural gas into a thriving export industry. There are abundant gas reserves in Oman and 1999 estimates put the proven reserves at 29.28 trillion cubic feet (tcf). The government has projected that by the year 2002 natural gas will contribute 15 percent of GDP. Most of the gas reserves are located in areas that are controlled by PDO. Oman has entered into a number of projects with overseas companies such as Gulfstream resources of Canada and Neste Oy of Finland to develop, explore, and produce natural gas in the northern part of the country.

Following the discovery of large gas deposits, attention moved away from the manufacturing industry and in 1999, manufacturing contributed 5 percent to GDP. Most of the country's industrial enterprises are involved in light industry. Existing companies manufacture soft drinks, textiles, perfume, and cement. The sector grew by 3 percent between 1994 and 1998, but it relies heavily on skilled expatriate labor and therefore does not contribute much to the creation of local jobs.

Evidence of Oman's rich cultural and architectural heritage can be seen in its hundreds of historic sites and its many beautiful beaches. The country's varied geography and range of climatic conditions give it enormous potential in the tourism industry, a sector which is still very undeveloped. Given Oman's current unemployment problem, combined with the thousands of young Omanis entering the workforce every year, the expansion of the tourism sector could create much-needed jobs. The government initiated a 15-year tourism plan in 1990, easing visa restrictions in order to open up the country to more tourists, and very quickly the number of visitors rose from 290,000 in 1994 to 503,000 in 1999.

In 2000, tourism represented less than 1 percent of GDP even though there was an 11 percent increase in the number of visitors between 1988 and 1992. In 1994 there were only 37 hotels in Oman and in 2000 there were 89. The government has made an attempt to attract visitors from the Gulf region, signing an agreement with Dubai whereby nationals of both countries can easily obtain visas. However, the government's plan is to attract affluent European visitors to the country who are happy to take supervised coach tours instead of exploring the country on their own. Government concerns about local sensitivities as well as the continuing high tax on alcohol serve as major constraints to the growth of this potentially lucrative industry.

The Omani government has made serious attempts to ensure the stability of the banking sector and in 2000 there were 16 commercial banks in the country, of which 9 were branches of foreign banks. In addition to the commercial banks, the government has set up 2 credit institutions that provide small loans for Omani citizens. The Omani Housing Bank provides loans to finance the construction of homes and the Oman Development Bank provides general microcredit . The Central Bank of Oman places restrictions on the amount of foreign exchange that banks are allowed to lend and invest and in addition sets the total amount of capital to be held by local banks at US$26 million and by foreign banks at US$9 million.

Oman's stock exchange was established in 1989 and is called the Muscat Securities Market (MSM). There are over 100 banks and companies listed on the exchange with a current capitalization of over US$2 billion. In 1999 Oman was included in the International Finance Corporation's emerging market index and the government has made concerted efforts to make the stock market more transparent and more regulated. Electronic trading was introduced in 1999 as well as a regulatory agency called the Capital Markets Authority (CMA).

Oman has no territories or colonies.

Nice. It was good, Information was handy. Helpful for gaining knowledge.