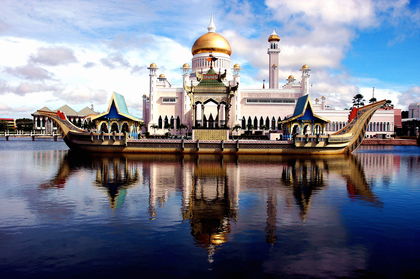 Nation of Brunei, Abode of Peace

Located in Southeast Asia, bordering the South China Sea and Malaysia, Brunei is geographically divided by Malaysia into 2 unconnected parts. Brunei has an area of 5,770 square kilometers (2,228 square miles) and a total coastline of 161 kilometers (100 miles). Comparatively, the area of Brunei is slightly smaller than the state of Delaware. Brunei's capital city, Bandar Seri Begawan, is located on the northeastern coast of the country.

The Malay people comprise 62 percent of Brunei's population, with Chinese accounting for 15 percent, indigenous people 6 percent, and other groups 17 percent. Islam is Brunei's official religion and Muslims account for 67 percent of the population. About 13 percent are Buddhist, Christians make up 10 percent, and those with indigenous beliefs make up the remaining 10 percent.

Fish is an important part of the local diet. The fishing sector, comprising catch, aquaculture, and seafood processing, contributed about 0.5 percent to the total GDP in 1998. In 1996 more than 60 percent of fish and prawns sold in Brunei were imported. The government hopes to develop the fishing industry, including fishing fleets and fish-processing factories, and sees foreign joint ventures as the way to obtain finance and expertise. The government believes the sector could become an important export revenue earner and employer. Brunei declared a 200-nautical mile fisheries limit in 1983.

Because of Brunei's mostly urban population and the wealth deriving from oil and gas, forest use has been limited. Currently about 80 percent of Brunei's total land is covered by forests, nearly 60 percent of it virgin. Forestry accounted for only 0.3 percent of the total economic output in 1998. The government is committed to preserving the important environmental, biotechnological, and other economic and social functions of its forests and hopes to develop their potential as a tourist attraction. Consequently, logging, limited to 100,000 cubic meters annually, is confined to meeting local needs only, and timber extraction for export is strictly prohibited.

Oil and natural gas mining is the backbone of Brunei's economy. In 1998 the oil and gas sector contributed an estimated 34 percent to GDP and dominated exports. In 1998 crude oil and partly refined petroleum accounted for an estimated 39 percent of total exports and natural gas for 49 percent. Brunei is the third largest oil producer in Southeast Asia and the fourteenth largest in the world; it ranks fourth in production of natural gas. Oil and gas mining is a capital-intensive industry and employs only a small percentage of the total labor force (5.2 percent in 1995). At the beginning of 1993 reserves were estimated at 1.4 billion barrels of oil and 320 billion cubic meters of gas. The government has pursued a national depletion policy since 1988 aimed at preserving resources and continuing exploration of new fields.

Brunei Shell Petroleum (BSP) is the biggest oil mining company. It has 7 offshore and 2 onshore oil fields in Brunei. The Brunei government is an equal shareholder with the Royal Dutch Shell Group in the company. Another important oil-exploration company is Jasra-Elf, a joint venture that has been actively exploring for hydro-carbons offshore and has made some discoveries.

Brunei's annual sales of liquefied natural gas (LNG) sales are currently nearly 6 million metric tons. LNG is as important a revenue earner as oil exports, and the bulk of it is purchased by 3 Japanese utility companies: Tokyo Electric, Tokyo Gas, and Osaka Gas. About 10 percent of LNG is used for domestic consumption.

Following the regional economic crisis in 1997, combined with concerns about falling oil prices throughout 1998, the Brunei government realized that the oil and gas industry can no longer limit itself just to exploration, drilling, and export. It is now aiming at developing a hydrocarbon products industry in Brunei.

The construction sector is the second most important industry in Brunei, contributing 6.6 percent of GDP in 1998. The sector's performance depends heavily on government spending. Indeed, the development of this sector is the direct result of increased government investment in developing infrastructure projects such as government offices, hospitals, schools, mosques, housing, fire stations, and sporting facilities.

Hit by the regional economic crisis in 1997-98, private sector construction projects almost collapsed. The government cut development spending on infrastructure projects by 50 percent from B$950 million in 1999 to B$550 million in 2000. Thus, growth in this sector is expected to be sluggish.

Manufacturing contributes only a small portion of Brunei's economic output. Its contribution to GDP has increased from 0.8 percent in 1980 to an estimated 3 percent in 1998. The major large-scale industries include food and beverage processing, garment making, cement production, and the production of pre-cast concrete structures. According to International Monetary Fund (IMF) data for the year 2000, 23 industrial sites are being established in Brunei. Food processing and furniture manufacture are designated for further development, while ceramic tiles, cement, chemicals, plywood, and glass are considered to have development potential by the government.

Before the mid-1990s the only tourists visiting Brunei were relatives and friends of expatriates who were working there. Several factors have held back the development of tourism: access to alcohol is limited; the cost of accommodation in the capital is high; accommodation and transport outside the capital is not available; and the general perception about the country is that there is little of interest to see. However, Brunei does offer both natural and cultural attractions, and the government is now actively promoting tourism as an important part of economic diversification.

The capital, Bandar Seri Begawan, is a neat, clean, and modern city. The cultural attractions there include the sultan's magnificent palace, the Brunei Museum, the Malay Technology Museum, and the Omar Ali Mosque. Kampung Ayer is a centuries-old collection of 28 water villages built on stilts in the Brunei River, and Jerudong Park is a recreational center located close to Tutong. The large tropical rain forest areas have been earmarked for ecotourism in sites such as Temburong National Park. However, the underdeveloped transport and accommodation facilities remain an obstacle to the expansion of the tourism sector.

In 1996 Brunei had 703,300 foreign visitors, most of them from the neighboring Sabah and Sarawak regions of Malaysia. Passengers on RBA flights to and from Australia are stopping over in the capital in increasing numbers. With 2000 designated as "Visit Brunei Year," the Asia-Pacific Economic Co-operation (APEC) meetings were held in Brunei and proved a boost for Brunei tourism.

Until the late 1980s the retail sector in Brunei was not particularly sophisticated. Aside from the local market, there were only coffee shops, general provision shops, Chinese supermarkets, and a few Chinese restaurants. In 1986 a Japanese store group, Yaohan, opened its first department store in Brunei. Since 1995 a more international range of shops has come to Brunei, including the Body Shop, and the fast food chains McDonald's, Pizza Hut, and Kentucky Fried Chicken. The new Sultan Foundation complex of shops now stands in the center of Bandar Seri Begawan.

Brunei Darussalam has no territories or colonies.

I am interested in Brunei,but i am a Cambodia people want to understand what Brunei is and its power of famous name in oil
2
rajan

brunai is a good country i want to visit there but how can i visit there? is there is freedom for every things