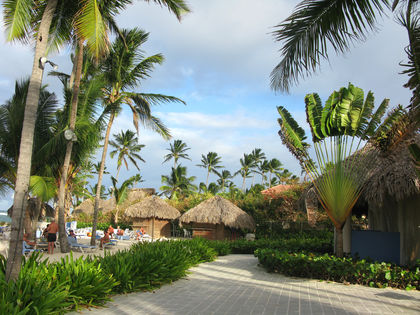 Haiti occupies the western third of the island of Hispaniola, between the Atlantic Ocean and Caribbean Sea, which it shares with the Dominican Republic. Haiti has an area of 27,750 square kilometers (10,714 square miles), slightly smaller than Maryland. It shares a border of 275 kilometers (171 miles) with the Dominican Republic and has a coastline of 1,771 kilometers (1,100 miles). Its capital and largest city, Port-au-Prince, is in a bay on the country's southwestern coast.

Haiti's population was estimated at 6,867,995 in July 2000, showing a growth rate of 1.39 percent and a total rise of 36 percent since the last official census of 1982, when the population stood at 5,053,792. The country's demographic statistics reveal the effect of extreme poverty and an HIV/AIDS epidemic. These conditions have reduced life expectancy to 49.2 years, contributed to high infant mortality and general death rates, and slowed population growth. At current growth rates, Haiti's population will stand at approximately 7 million in 2010.

Despite slow growth rates, Haiti is one of the most densely populated countries in the world, estimated at 270 persons per square kilometer (699 per square mile) in 1997. Land shortages and urban overcrowding have led to many Haitians attempting to emigrate , either to the neighboring Dominican Republic or to the United States. The net migration rate stood at 2.97 persons per 1,000 in 2000. The capital, Port-au-Prince, had an estimated population of 850,000 in 1995, but much settlement in slum areas is unregulated, and the population probably exceeds 1 million.

Haiti's population is a young one, with 41 percent estimated to be between 0 and 14 years of age in 2000. Most Haitians are of African descent, with approximately 95 percent of the population defined as black. The remaining 5 percent is comprised of mulattos (people of mixed European and African ancestry), and a small community descended from immigrants from the Middle East.

Haiti has no territories or colonies.

Welcome to the Embassy of the Republic of Haiti, Washington, D.C. <http://www.haiti.org> . Accessed September 2001.

Louise
People of small countries can also be poor. Wealth depends on the quantity and quality of economic activity, and the kind of payment which gets made for factors (Skill and other resources). If the economy is not dynamic, if the people are not very skilled and lack access to other resources, they will be poor. I dont think any population in the world is intentionally lazy.
2
Joe

The people have tried that. There was a big deal made about Haitian boat people a few years ago here in the US. Other countries can not handle the 9 million plus people any more then we can. There are very few natural resources on the Island. An example is the is very little natural fdeul so they have strip the island of most of its forest. I fnd the people of Haiti very hard working and honest. Do not let the stories of fighting now after the earthquake make you think they are hard people. The sensational news reports are just that only the sensational. Most of the people are working hard to get their own help or waiting patiently as they can.
3
Joyce nthiga

God bless the one's that survived and lets all join hands to help the vulnerable in the society. God bless Haiti!
4
Maurice

I have been to Haiti 51 times since 1995. I was in Port-au-Prince when the quake hit. I stayed there for 5 more days and did what I could to help. I found little or no crime or disorder, only police and firemen who did not respond to the emergency. The people are resilaint, kind and considerate.

Lets all hope and pray for all the survivors of the Haiti earthquake. This was devastating for not only Haiti but all of the world. I encourage all of you to donate money and medicine to Haiti. Remember 1 thing of Advil could save someones life. Haiti needs your help!
William
6
julius osayi

Haiti is a blessed country and i know there's a lot of great people in that country.' the gospel is the only hope for Haiti and that is what i we stand for in believers love world we build a happier world with love
7
Marilyn Wathington

While asking why is Haiti so poor, we should not be so quick to blame the victims of greed, exploitation, profiteering, corruption and imperialism. Pray for Haiti and those who have used and abused (within and without) this tiny country. Greed and her many faces knows no shame. Black does not mean lazy! Do some research before you accuse, all is not what it appears to be.
Marilyn
8
nini

haiti was the second country to win it freedom.i think this passage is organize and simple
9
nini

Haiti is actually poor because they had to pay the french just to remain a country. It has nothing to do with their color or race, they are not lazy people. Their national resources too are very complicated because of where they are located. In North America we have an abundance of national resources and we don't have to pay anyone to remain a country. Haiti is very interesting, I would love to learn more!
11
Victor Dogonyaro

Why is the HIV stuff just too much on them. God help us all.
12
Victor Dogonyaro

Why is the HIV stuff just too much on them. God help us all.
13
bolatito yusuf

Haiti is poor because they have little natural resources and a teeming population which is also puting more pressure on the little available resources not because they are lazy. RICH COUNTRIES OF THE WORLD SHOULD HELP THIS LITTLE COUNTRY God bless HAITI
14
Rose

Why is no-one reading, or commenting about Haiti anymore?
15
Narasimhamurty

I like the country, god bless them and quick improve this country
16
22hrichards

I think you did a great job on describing things. hank you for clearing this information that i did not know before thanks so much.