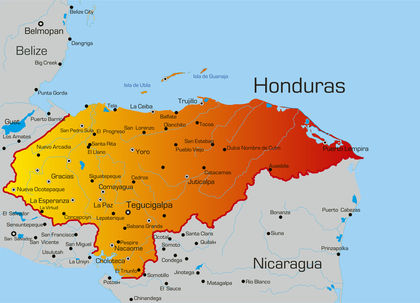 Honduras is located in Central America. Its northern border, between Guatemala and Nicaragua, lies along the Caribbean Sea. The southwestern tip of the country, between El Salvador and Nicaragua, borders the northern Pacific Ocean. Slightly larger than Tennessee, Honduras has an area of 112,090 square kilometers (43,278 square miles).

A significant portion of the Honduran population— about 43 percent—is under the age of 15. Approximately 54 percent are between the ages of 15 and 64. Those over 65 account for only 3 percent of the population. The life expectancy for males in Honduras is 67.91 years, while females are expected to live slightly longer, to 72.06 years.

The mining industry in Honduras has achieved noticeable growth in recent years, with output increasing by 7 percent in 1999. However, between 1995 and 1999 the industry's contribution to the gross domestic product remained steady at around 2 percent. Honduras's primary mineral exports are silver, lead, and zinc. With a substantial portion of the country's mineral deposits still unexploited, the potential for growth in the sector is high. Attempts to expand the industry, however, have been complicated by political and environmental factors. Despite new mining laws, which were introduced by the Flores administration in 1998 to increase investment in the sector, foreign companies have been hesitant to operate in Honduras. The Canadian company Greenstone had to abandon its operations in the Copan region near the border with Nicaragua, in 1999 because of territorial disputes between Nicaragua and Honduras. Mining interests near Tegucigalpa have been opposed by environmental groups, offering another setback to the industry.

Unlike the mining industry, the manufacturing sector has experienced unimpeded growth over the last decade, with the most dramatic expansion being in the maquila industry. The industry produced about US$545 million in foreign exchange earnings in 1999 (just over 18 percent of the gross domestic product at market prices), exceeding agriculture proceeds to become the single largest export category. The number of workers in the sector grew from 9,000 to 120,000 between 1990 and 1998. A majority of these workers—70 percent—were women aged 15 to 26. Between the years 2000 and 2005, the industry will likely expand by another 80,000 workers, with new investment expected to reach US$700 million.

Growth in maquila can be attributed to a number of factors, including favorable tax provisions, a solid manufacturing infrastructure, and low wage costs. A series of laws passed between 1975 and 1999 granted national and foreign companies tax and duty exemptions in specified areas called free zones. This made the maquila industry more lucrative for domestic companies and established Honduras as a particularly attractive base of operations for foreign firms.

In May 2000 the U.S. Congress decided to eliminate an 18 percent duty on finished apparel from Africa, the Caribbean, and Central America, making Honduran maquila producers more competitive. As investment and labor increases, the maquila sector will likely diversify and begin performing more technical operations, such as the cutting and dying of fabrics. As it stands now, a majority of these operations take place in the United States.

In July 2000 Honduras was granted North American Free Trade Agreement (NAFTA) parity for its exports, meaning it would receive the same trade benefits as signatories of NAFTA even though it was not an actual party to the agreement. Although NAFTA parity had been granted to other Central American and Caribbean countries, Honduras was in an especially good position to benefit from enhanced access to American markets. Its port facilities are some of the most developed in Central America, and its proximity to American markets facilitates high levels of trade.

Tourism is one of the fastest growing industries in Honduras. The country hosts a variety of attractions including beaches and coral reefs, historic colonial cities, Mayan ruins, and lush national parks. Revenues from tourism rose steadily in the 1990s, from US$30.6 million in 1991 to US$185 million in 1999. In 1994 Honduras had around 230,000 recreational visitors. By 1999 the number had increased to 375,000.

The government has attempted to expand the tourist industry in part through large-scale development projects. A plan emerged in the late 1990s to allow foreign nationals to own land and operate tourist-related businesses within 40 miles of the coast. This plan was vigorously opposed by the coastal Amerindians who feared the development would disrupt their livelihoods. Amerindians may be a minority in the overwhelmingly mestizo population, but they have grown more vocal in recent years. In 2000 Congress rejected the measure that would have allowed foreigners to run tourist operations in the coastal regions. Clashes over coastal development between the government and indigenous groups will likely continue.

When financial services in Honduras were liberalized in the 1990s, the banking industry underwent a period of expansion. By the end of the decade, the sector had begun to consolidate. After the 1999 collapse of Banco Corporativo, Bancahsa and Banco del Ahorro Hondureno merged to create the largest bank in the country. By the late 1990s, financial assets in Honduras had been consolidated into the hands of a few large banks. With most the 19 finance houses and 11 insurance companies being grouped under holding companies with common shareholders, banks can easily shift assets in response to changing market forces and new regulations.

Only 2 foreign banks operate out of Honduras: Lloyds Bank and Citibank, the latter of which owns Banco de Honduras. The country's 2 stock exchanges— one in the capital, Tegucigalpa, and the other in San Pedro Sula—run mainly short-term credit operations.

In an effort to shore up confidence in the banking system and stem capital flight (the movement of financial assets from domestic markets to foreign countries), the Banco Central de Honduras (the central bank) in 1995 authorized the holding of U.S. dollar accounts in Honduran banks. Import and export operations benefited from the move. In another measure to retain capital, insurance companies were allowed to issue policies in U.S. dollars, having been formerly restricted to providing coverage in lempiras.

Honduras has no territories or colonies.

I too am watching their match against Spain and found the information on Honduras very interesting as I didn't know anything about the country previously.
3
teo

I AM DOING A PROJECT ON HONDURAS AND THIS WEBSITE HAS GREAT INFORMATION ABOUT THE TOPIC!!
5
Hugs Rock

I DO LIKE THIS SITE I CAN FIND ALL THE INFORMATION ON HONDORUS FOR SPANISH AND THIS IS THE PLACE I WENT! REALLY
6
kathy

going to be visiting this country and would like information on the best suveners.what the best items to remember this trip
7
DESTINY

This website is very useful for my project on Honduras for geography.
10
olivia

How is this nation currently working to control these plagues? Are international or national gov programs being used? Please use such programs and thier medical purpose?
11
connor

What type of government does Honduras have? Cant find it on this website,any help please?
13
Angela

this was a really good site. And it was very helpful