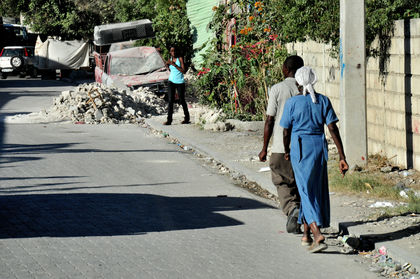 No recent statistics exist, but it is widely accepted that Haiti is not merely the poorest country in the Western Hemisphere but also one of the most unequal. A small elite of no more than several thousand families is extremely wealthy, including many millionaires among their number. In stark contrast, an estimated 80 percent of Haitians live in absolute poverty. There is a small middle class comprised of civil servants and other state-sector employees, but a vast gulf exists between a tiny rich minority and the overwhelmingly poor majority. Class and color have overlapped ever since Haitian independence, with the lighter-skinned minority occupying positions of political and economic power. This status quo was challenged by the Duvalier dictatorship, which promoted some of its black supporters into a growing middle class.

The country's wealthy are clustered around the cooler mountainside suburb of Pétionville, where French

restaurants and luxury car concessions cater to expensive tastes. Education and medical services are entirely private, and the children of the elite tend to be educated abroad, either in Paris or the United States. Shopping trips to Miami are commonplace, and most of the richest families hold dollar bank accounts in the United States.

Life for the rural and urban poor could not be more different. Most Haitians live in small, often remote, villages or isolated settlements, with no access to electricity, clean water, or social services. Some rudimentary education is offered by church and other charitable organizations, but the distances children must travel to school, the costs of books and uniforms, and the necessity for them to work from an early age means that illiteracy is estimated at over half of the adult population. Illness can often spell financial disaster, as meager savings or investments such as a pig must be sold to pay for medicines. In some areas large numbers of people are dependent on aid agencies for food supplies.

Existence in the teeming slums of Port-au-Prince is perhaps even grimmer, with overcrowding, disease, and squalor widespread. Those who work can expect to earn no more than US$2 a day, hardly enough to buy food, let alone other necessities. The majority, however, must scrape some sort of living from the informal sector. Figures for child mortality, communicable diseases, and life expectancy reveal the country's poverty and deprivation. According to the Pan-American Health Organization, approximately 380,000 Haitians—over 5 percent of the population—were infected with HIV/AIDS by 2000.

so helpful in pp writing. this is from the perspective of a outsider but as the embassedor of a certain c0untry the position we are picking is not that easy. but still some inspiration can be given through this article.
2
HaitianQueen