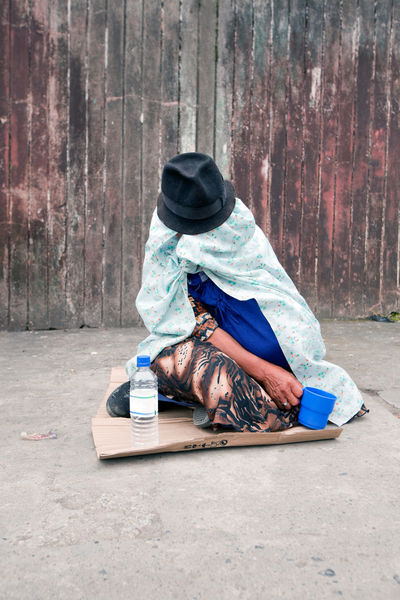 Ecuador's population was burdened by an unequal distribution of wealth in the 1990s. In 1996 the wealthiest 20 percent of Ecuadorians earned half of the nation's total income, while the poorest 20 percent collected only 5 percent. The gap between rich and poor grew noticeably during the 1999 economic crisis, when much of the middle-class fell below the poverty line because of rampant currency devaluation and inflation. Figures released by international organizations in 2000 show that half of all Ecuadorians were living in poverty, a dramatic increase from just a few years earlier, when the poverty rate was estimated at 35 percent. Poverty is more pervasive in rural areas of Ecuador, affecting almost 70 percent of non-urban dwellers (2000).

Because of the contraction of Ecuador's middle class, the division between the upper and lower classes has widened, allowing for little upward mobility among the nation's poor. Members of the elite are well established within their specialist fields as doctors, lawyers, politicians, or leading business entrepreneurs. The middle class embraces a wide range of professional and bluecollar

workers, including teachers, bus and taxi drivers, service and retail employees, oil industry employees, small-business owners, and small-scale farmers. The largest segment of Ecuador's population includes peasants and subsistence farmers, informal sector vendors, agribusiness employees, temporary workers, and the unemployed. Most of these Ecuadorians are denied the education and connections to gain access to the small professional sector and are thus confined to low-paid jobs.

Ecuador's constitution, revised in 1998, places strong emphasis on social programs and assistance to the poor, promising free health care and government subsidies to the nation's most needy citizens. However, public welfare expenditure, limited by the government's cumbersome debt and lack of funds, has had little impact on poverty. A cash transfer to the country's poorest families, called a bono solidario (solidarity bond), is the most consistent element of Ecuador's poverty relief program, but it reaches only some of the poor. Public health care is officially free, but the quality of medical services is inadequate. A report on Ecuador's health care system released in 1996 by USAID, observed that "The supply and quality of care in Ministry of Public Health facilities is generally agreed to be inefficient and poor." The wealthy can afford private health care of a higher quality, but private care is increasingly beyond the reach of middle-and lower-class Ecuadorians.

The design of Ecuador's education system causes similar problems for economically disadvantaged citizens because the government subsidizes university education at the expense of elementary and secondary schools. Wealthy families can afford to send their children to the best private schools, while poorer families must settle for the variable quality of public education and disruption caused by frequent teacher strikes. Access to education is also divided along rural/urban lines, with public expenditure favoring urban schools and neglecting vocational and manual skills training.

Some people don't understand what capitalism is. What you guys want is socialism, huh?