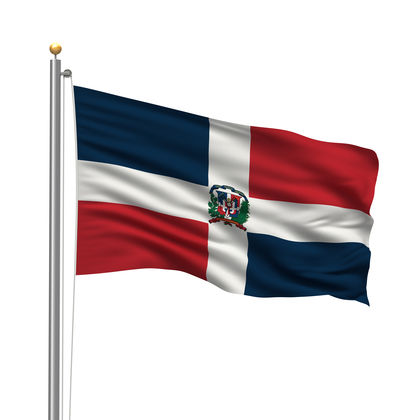 A country occupying the eastern two-thirds of the island of Hispaniola (Haiti occupies the western third) between the Caribbean Sea and the Atlantic Ocean, the Dominican Republic has an area of 48,730 square kilometers (18,815 square miles), more than twice the size of New Hampshire. It has a total coastline of 1,288 kilometers (800 miles), and a border with Haiti of 275 kilometers (171 miles). The capital city, Santo Domingo, is located on the country's southern coast.

The Dominican population is mostly of mixed African and European descent, with 73 percent of people describing themselves as mixed-race or mulatto. Some 16 percent define themselves as white, mostly descended from Spanish and other European migrants, while 11 percent are classified as black. The population is generally young, with 34 percent of Dominicans under the age of 14, as opposed to 5 percent over the age of 65. Most people live in urban areas, especially in the Santo Domingo area, which has a population of more than 2.5 million. The average population density of 169.1 per square kilometer (1997) is unevenly distributed, with population concentrations around the coastal towns and Santo Domingo in particular.

The Dominican Republic's population growth rate is offset by a high level of outmigration, estimated at 4 persons per 1,000 in the year 2000. Most migrants aim to settle in the United States, where there are greater economic opportunities. There are no official figures, since a considerable amount of Dominican migration is undocumented, but estimates put the Dominican population in the United States—particularly in the New York area—at more than 1 million. Conversely, the Dominican Republic receives thousands of Haitian migrants each year, many of whom come to cut sugarcane and perform other low-paid jobs.

The industrial sector contributed an estimated 32.2 percent to the country's GDP in 1999, led by mining (ferronickel, gold, and silver) and the manufacture of goods for export to the United States. To a lesser extent, there is the manufacture of food products, consumer non-durables, and building materials for the local market and for neighboring Haiti. The sector employed an estimated 24.3 percent of the workforce in 1998.

It has been estimated that the Dominican Republic contains about 10 percent of the world's ferronickel deposits, but mining is a highly unpredictable part of the industrial sector, vulnerable to fluctuating world prices and unsustainable production techniques. In 1998, for instance, ferronickel exports earned the Dominican Republic US$372 million, but in 1993 declining world prices, due to oversupply, forced the country's export earnings down to US$128.2 million. Since then, prices and export income have stabilized. Gold and silver have been of importance to the Dominican economy since the 1970s, but export earnings have again been irregular. Some gold and silver is exported as basic commodities, while the Dominican Republic also exports semi-finished metals and jewelry.

About 500 companies in the Dominican Republic manufacture goods primarily for the North American market. Situated in 50 industrial free zones around the country, these mostly foreign-owned corporations take advantage of generous tax and other financial inducements offered by the government to businesses that operate within the zones. Approximately 200,000 people, or about 8 percent of the workforce, are employed in this sector. The principal attractions for the foreign companies, which are based in the United States, Canada, Korea, and Taiwan, are a large pool of cheap labor and proximity to the North American market. They mostly produce clothing, electronic components, footwear, and leather goods, which are assembled rather than manufactured by a mainly female workforce. The raw materials or semi-manufactured goods are usually imported duty-free from other developing countries (electronic parts are imported from industrialized Puerto Rico) and put together in the free zones. They are then exported under the terms of the Caribbean Basin Initiative, which gives duty-free entry into the United States to goods produced in the Dominican Republic. The value of exports amounted to US$1.9 billion in 1996, but the contribution to the trade balance was only US$520 million because many of the basic materials for the free zones had to be imported and paid for.

Other, more traditional manufacturing is based on sugar refining, cement, iron and steel production, and food processing. Rum is a significant export commodity, and beer and cigarettes are manufactured for local consumption. Most industry of this sort is located around the working-class perimeter of Santo Domingo and other large towns.

Services were estimated to contribute 56.5 percent of the GDP in 1999 and to employ an estimated 58.7 percent of the workforce, making this the most important sector of the Dominican economy. Tourism is the single biggest revenue earner, with receipts increasing more than tenfold from US$173 million in 1980 to more than US$2 billion by 2000. Successive governments have invested heavily in tourism development, creating upgraded airports and other infrastructure. Foreign investment has also been important, with several large Spanish, German, and French companies building or managing some of the larger hotels. Some 2.1 million tourists arrived in the country in 1999, not including visiting Dominicans. Most come from Europe, with about 25 percent originating from the United States or Canada. The country now has almost 50,000 hotel rooms, more than any other Caribbean country. About 50,000 Dominicans are directly employed in this sector, mostly working in hotels, and another 110,000 are indirectly employed as taxi drivers, tour guides, or tourist-shop staff. Most tourists visit the Dominican Republic on account of its beaches, but there is an expanding eco-tourism and outdoor activity sector, focused on the country's mountains and wildlife.

Retail activity in the Dominican Republic takes many forms, from U.S.-style supermarkets and shopping malls in Santo Domingo to rural markets and tiny family-run corner stores in villages. A small but affluent middle class can afford to shop at the former, while the large impoverished rural community resorts to buying small amounts of daily essentials from colmados (small stores that often double as bars). Much of this small-scale retail activity occurs within the so-called informal sector , and reliable statistics are unavailable. In an attempt to regulate the retail sector, the government has recently reformed taxation laws, so that small shops pay taxes on a regular monthly basis. Many transactions, however, go unrecorded.

The Dominican Republic does not as yet have a financial services sector aimed at foreign investors, but a securities exchange was opened in 1992 as the first step towards a stock exchange.

Since its independence in 1844, the Dominican Republic's main trading partner has been the United States. Initially this trade overwhelmingly consisted of sugar exports,

but currently trade is more diversified, with the Dominican Republic still exporting sugar but also other commodities such as clothing, footwear, and electronic components. The United States exports a large range of goods to the Dominican Republic, including automobiles, machinery, chemicals, and some foodstuffs. In 1999, the United States accounted for 66.1 percent of Dominican exports and 56 percent of its imports. Belgium is also an important export market, while Venezuela, the Dominican Republic's main supplier of petroleum, accounts for 23 percent of the import bill. Trade with neighboring Haiti is much less, largely because much of the flourishing informal-sector trade that takes place across the border is not regulated or recorded and hence does not appear in national accounts.

The Dominican Republic has for many years spent much more on imports than it earns from exports. The CIA World Factbook estimated that in 2000, for instance, its import bill totaled US$9.6 billion, while exports brought in only US$5.8 billion. This huge trade deficit is offset by earnings from tourism (approximately US$2 billion annually) and by the money sent back to the country by Dominicans living overseas (estimated at US$1.5 billion each year). Even so, the Dominican government often records a deficit in its balance of payments . While deficits are not necessarily damaging, they generally mean that there is a shortage of foreign reserves in the country's banking system and that the government may need to borrow from abroad to finance its spending.

In 1998 the Fernandez administration signed free-trade agreements with the Central American Common Market (CACM) and the Caribbean Community and Common Market (CARICOM). The Dominican Republic has also made it clear to the United States that it would like to be part of an enlarged NAFTA or similar regional free-trade bloc. The country also has preferential access for certain goods into the European Union (EU) and access to EU financial aid.

Dominican Republic has no territories or colonies.

The population of the Dominican Republic is indeed mixed, but the indigenous component has been left out. Recent mtDNA and Autosomal DNA sequencing studies have demonstrated that between 15% to 23% of the population has Taino ancestry.
2
HBABAZAMINA

what's the official language spoken?HOW TO SITUATE THE COUNTRY TO MY STUDENTS,?
3
GUANTON

THE SIZE OF THE

THE SIZE OF THE ISLAND IS SMALL.

THE ISLAND IS TWICE BIGGER THAN HATTI.