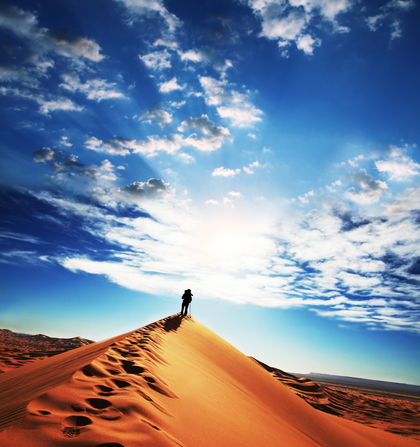 Morocco is located in the northwestern corner of the African continent. It is bordered by the Atlantic Ocean to the west, the Mediterranean Sea to the north, and Algeria to the east and southeast. The Strait of Gibraltar separates it from Spain at its northern tip. Its southern border is the Sahara Desert. With an area of 446,550 square kilometers (172,413 square miles) and a coastline of 1,835 kilometers (1,140 miles), Morocco is slightly larger than California. Morocco's capital city, Rabat, is located in the northwest of the country overlooking the Atlantic Ocean. Other major cities are Casablanca on the Atlantic Ocean, Marrakech (the business capital) in the center, and Tangier in the north, on the Strait of Gibraltar.

The growth rate of Morocco's population has slowed down since the 1990s, averaging 1.6 percent between 1995 and 1999, down from 2.5 percent in the preceding decade. With a projected growth rate of 1.4 percent between 2000 and 2015, the population is expected to reach 41 million by 2029. The population is generally young, with some 23 percent under the age of 15. Like people in many developing countries, a majority of Moroccans live in urban areas. The population of urban areas has grown significantly since the 1960s. Casablanca, Marrakech, and other major urban centers are home to some 54.5 percent of the country's people.

The labor-intensive agricultural sector is largely underdeveloped and inefficient, as a result of the high cost of energy, credit, and land, and a scarcity of investment. Only 1 million hectares of a total of 8.7 million hectares of cultivated land are irrigated. About 90 percent of the land, mostly comprised of small land holdings, is dependent on rainwater. A small fraction of the cultivated land, some 1 million hectares is comprised of modern export-oriented farms that produce 80 percent of Morocco's citrus and wine production, 33 percent of its vegetable output, and 15 percent of its cereals production. These irrigated farms, concentrated in the Gharb plain around Fez and Meknes, the Doukkala plain around Casablanca, and the Beni Mellal and Berkane areas, also produce tomatoes, potatoes, and beet and cane sugar, as well as oil and olive oil for export. In addition to legal agricultural products, Morocco is a major producer and exporter of cannabis (marijuana), which is mostly concentrated in the northern Rif region.

Major agricultural products include dairy products, meat, fruit, and vegetables, in which Morocco is self-sufficient. Morocco is also a producer of grains, which are grown on 68 percent of the cultivated land, plus sugar, oils and tea, but production is rarely sufficient to meet domestic demand. As a result, and depending on annual winter rainfall, Morocco imports the bulk of its cereals. According to the EIU, harvests range from around 10 million to under 2 million metric tons annually and have averaged 5.8 million metric tons since 1990. Agriculture production has dropped significantly since 1998, due to drought conditions, prompting the government to increase customs duties on wheat imports to protect local farmers.

The fishing industry is also a major contributor to the economy, accounting for an average of US$600 million in export earnings. Morocco's fishing industry is underdeveloped and is forced to compete with European companies. It is also overexploited, which has prompted the government to impose periodic bans on the harvesting certain types of fish. Since 1997, the government has been attempting to revamp and upgrade the fishing industry. Several new ports, at Dakhla, Boujdour and Layoun, among other places, are to be built as part of the plan, and the government is reportedly seeking joint ventures with foreign investors, mainly in Japan and France, to replace the government's fisheries agreement with the European Union, which expired at the end of 1999.

Phosphates account for 95 percent of Morocco's output by volume. mining. Phosphates, raw and manufactured, are the country's main exports, managed by the state-owned Office Cherifien des Phosphates. The export of phosphates and phosphate products accounted for US$1.4 billion in 1999, or about 18.5 percent of total earnings from exports. With three-quarters of the earth's phosphate reserves after the United States and Russia (11 billion metric tons of known reserves and 58 billion metric tons of probable reserves), Morocco is the world's third largest producer of phosphates and the largest exporter of phosphate rock. Phosphates are mined in Khourigba, Youssoufia, and the Western Saharan mine of Boucraa and Benguerir. A new mine at El Gantour, south of Rabat, will soon start production. Phosphate revenue has increased steadily since 1996, the first profitable year for the industry, reaching US$44 per metric ton in 1999, up from US$33-35 per metric ton in 1993-95. Mining and processing capacity have increased steadily over the past years, and a 30-percent expansion is planned in 2001. Since 1996, the government has shifted focus toward marketing its phosphate products through joint ventures with foreign companies, mainly French and Belgian.

In addition to phosphates, Morocco is a major producer and exporter of industrial minerals and base metals. It produces silver, zinc, cobalt, copper, fluorine, lead, barite, iron, and anthracite. In contrast to the state-controlled phosphate sector, the extraction and processing of most of these minerals is in private hands, and efforts are currently underway to privatize the rest, especially the silver and lead mines, by 2002. A comprehensive survey of minerals across the country is also underway with the help of French, British, South African, and Canadian companies

The manufacturing sector is an important and growing contributor to the Moroccan economy. The sector has steadily grown by an average of 1.9 percent a year between 1994 and 1998. Production increased by 2.8 percent in 1999 and is likely to maintain that upward trend in 2001. The government adopted a new investment law in 1981 to encourage domestic and foreign investment in the industrial sector. These efforts gained added momentum with the launch of the privatization program in the early 1990s. A plan to modernize the sector and upgrade existing companies to meet European standards was launched in 1997. These efforts have been largely successful in attracting foreign investment. Major U.S. companies, such as Microsoft, Compaq, and Oracle, have a presence in the country.

Manufacturing industries are mainly concentrated in Casablanca, Fez, Rabat, Tangier, and Settat. In recent years, considerable investment has been made in cement works and sugar factories to meet the major part of local demand. Plans are also underway to develop steel production in the city of Nador and the production of chemicals and fertilizers in the El Jadida region. Morocco's industrial base consists mostly of food processing, textiles, pharmaceuticals, and the processing of phosphate rock into phosphoric acid and fertilizers. Since the early 1980s, the output of textile production, mostly done under contract with European companies, has grown by 5 times, from US$120 million in 1980 to US$570 million in 1990. Growth in the clothing sector slowed down in the late 1990s, due to declining domestic purchasing power and lower world demand, but the sector is expected to continue to grow in the future. The pharmaceutical industry, which mostly relies on imported raw material, is also a growing sector, although most of its output is consumed domestically.

Tourism is important to the health of the Moroccan economy, generating approximately US$1.98 billion and employing some 600,000 people in 2000. Tourism is Morocco's second greatest foreign-currency earner after remittances by Moroccan expatriates and has been identified as the second most important growth sector in the country. The tourism sector's growth, however, has been stifled by a combination of factors, including the lack of investment in hotel capacity and personnel training. Regional events, such as the civil war in neighboring Algeria, have also adversely affected the sector, as evidenced in the decline in the number of tourists in 1991 out of concerns about the spillover of the conflict into Morocco.

Since the mid-1990s, however, the government has moved to revitalize the sector by attracting foreign capital, rescheduling part of hotel debts, and reducing the tax burden. The government also plans to set up a special tourist police force to insure safety. Several state-owned hotels were sold to private investors, mainly foreign companies from France and the United Kingdom. Worldwide hotel chains, such as the Sheraton, Hilton and Intercontinental, have a presence in Morocco, but the majority of hotels are locally owned. The government has been actively encouraging the development of tourism, mainly in the cities of Agadir and Marrakech. As a result, a 10 percent increase in the number of tourists visiting the country was recorded in 1998. Plans are currently underway to double the number of tourists to 4 million and raise gross revenue to US$6 billion by 2005.

Morocco's banking system is comprehensive. Despite government efforts since the early 1990s to reform the financial sector and improve banking regulations, restrictions continue to be in place, especially on the movement of capital. The conversion of the dirham into a fully convertible currency , originally set for 1997, has also been delayed. Morocco requires the majority shares in commercial banks to be owned by Moroccans. Most of the country's 14 commercial banks are partly owned by European banks. Since 1996, foreign banks have been able to buy and sell foreign currency at market rates, due to the new interbank foreign exchange market set up that same year.

Morocco has a single stock exchange, the Bourse Valeurs de Casablanca, which is the third largest in Africa after South Africa and Cairo. The market, managed by 13 brokerage companies, was privatized in 1996 and has been regulated by an independent commission since. Although full foreign participation in the market is allowed, foreign investments constitute only 10 percent of overall investment. At the end of 1999, the Casablanca stock exchange recorded a 5.2 percent correction, largely due to previous overvaluation. Efforts were underway in 2001 to attract foreign investment by upgrading its infrastructure .

The construction sector is one of the fastest growing sectors of the economy. Growth in this sector has been fueled by public works (construction by the government) and the private construction of affordable housing units to alleviate the chronic shortages in housing, especially in urban areas. In 1994, the government launched an ambitious construction project to build 200,000 housing units. Although the program has failed to reach its target, the construction activity is likely to continue. New internationally funded initiatives were announced in 1999. These include a US$80 million project funded by the U.S. Agency for International Development to construct new housing to replace shantytowns in major cities and a US$75 million construction project to rehabilitate the city of Fez.

Morocco has a poorly developed retail sector. While the major cities sport a variety of retail stores, including fast-food franchises such as McDonald's, which operate alongside souks (traditional markets), most towns in the interior of the country have small family-owned shops, farmers' markets, and temporary roadside stands.

Morocco has no territories or colonies.

this is really good 4 my assignment. Thanks alot
jack age 12
2
megan

I USED THIS ON MY REPORT IT HELLPED A LOT THX!! I USE THIS A LOT NOW! IF U EVER NEED A SITE GO HERE!
4
jessica

this really helped me with my french project! so much info but easy to understand
6
Nathan

This was truly a wondrous job. Helped me vastly on my Model United Nations Project. Hope more people read this and help to edit it in depth.
7
Ryan

This is helping me so much on my project in S.S. I picked the most wonderful country of them all. MOROCCO!
9
Geni

Very helpful for my school project thanks a lot and keep it up! :)
10
Camron

Thanks, this site has been a great help ;). I recommend this site.
13
Taaseen

THIS REALLY HELPED GUYS MY GEOGRAPHY HOMEWORK WAS COMPLETE IN 10MIN BLESS YOU! Taaseen(12)