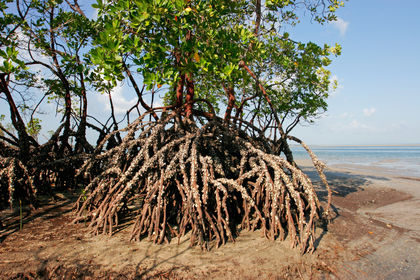 Located in southeast Africa, Mozambique has a total area of 801,590 square kilometers (309,493 square miles)—an expanse which is slightly less than twice the size of the state of California. The coastline of the country, which spans 2,470 kilometers (1,535 miles) along the entire eastern frontier, borders the Mozambique Channel and the Indian Ocean. To the north of Mozambique lies Tanzania, to the northwest Malawi and Zambia, to the west Zimbabwe, and to the southwest South Africa and Swaziland. Maputo, the capital of Mozambique, is situated at the pointy southern tip of the country's territory, not far from the South African and Swaziland border.

From 1975 to 1998, the population of Mozambique grew at an average annual rate of 2.6 percent, increasing substantially from approximately 10.5 to 18.9 million. With a current annual growth rate of 1.7 percent, the population should reach 25.2 million by 2015. In order to restrain this growth, the government announced a population control policy in 1997. Among other things, the plan seeks to disseminate information on different forms of birth control. One of the major impediments, however, is that most people in rural areas must have large families in order to have more workers to till the family plots. According to a 1997 census, approximately 70.8 percent of the population live in rural areas, where poverty is rampant and birth control limited.

The current birth rate in Mozambique is 37.99 births per 1,000 persons, while the death rate is 23.29 deaths per 1,000 persons (2000 est.). The high death rate reflects, in part, a growing HIV/AIDS epidemic. The Health Minister Aurelio Zihao, for example, estimated that approximately 250,000 Mozambicans died as a result of AIDS in 1999, though most of these deaths were not registered as HIV/AIDS related. Zihao states that the major causes behind the HIV/AIDS epidemic are poverty, unemployment, illiteracy, and the low status of women. The educational campaign sponsored by the Health Ministry targets vulnerable groups, such as soldiers, long-distance truck drivers, students, poorly educated women, street children, migrant mineworkers and their wives, and prostitutes. The government at large has been criticized for not taking an active role in the HIV/AIDS campaign.

With 43 percent of the population aged 14 years and younger, 54 percent aged between 15 and 64 years, and only 3 percent aged 65 years and over, the population of Mozambique is relatively young. A young population may offer opportunities in terms of an expanding labor force and thus a potentially expanding economy. If economic decline accompanies labor force growth, however, the results will be higher unemployment and exacerbated poverty.

Approximately 99.66 percent of the Mozambican population belong to one of the many indigenous (local) ethnic groups, such as the Shangaan, Chokwe,

Manyika, Sena, and Makua. Europeans comprise a marginal 0.06 percent of the population, while Euro-Africans and Indians respectively account for 0.2 percent and 0.08 percent. In terms of religion, 50 percent of Mozambicans are adherents of indigenous religious systems, 30 percent are Christians, and 20 percent are Muslims. The official language of Mozambique is Portuguese, though most Mozambicans express themselves primarily in one of the numerous local languages that are spoken.

There are a total of 8 banks in Mozambique, in addition to the central bank, the Bank of Mozambique. All of these banks, many of which were controlled by the government prior to mid-1990s, are now part of the private sector. The Banco Comercial de Mocambique (BCM), which has a considerable presence across the country, dominates commercial banking. The government controlled BCM until 1996, when it was sold to a consortium led by the Portuguese Banco Portugues Mello. The government still retains a 49 percent share in the BCM, though it plans on selling its shares. Despite these plans, the government was forced to authorize the issuing of $39 million in treasury bills as part of an effort to recapitalize the BCM, along with the Banco Austral, to prevent each from becoming insolvent. Both banks have large loan portfolios that have proved unrecoverable. The Banco Austral, Mozambique's second largest bank, was sold to a consortium led by Southern Berhad Bank of Malaysia in 1997, though the government retains a 40 percent share, which it also plans on selling.

With a share capital of $30 million, the Banco Internacional de Mocambique (BIM) is the third largest bank in the country. In January 2000, the Banco Comercial Portugues, the parent company of BIM, acquired Grupo Mello, the parent company of BCM. Consequently, 2 of the largest banks in Mozambique are now controlled by 1 bank in Portugal. Other important banks include the Portuguese-owned Banco Comercial e de Investimento and the Portuguese-South African Banco Standard Totta.

In addition to the network of banks, there are also several investment agencies operating in the Mozambican financial market, including the International Finance Corporation and the Commonwealth Development Corporation. Moreover, in 1999, a small stock exchange was established in Maputo with the assistance of the Lisbon stock exchange.

Mozambique has no territories or colonies.