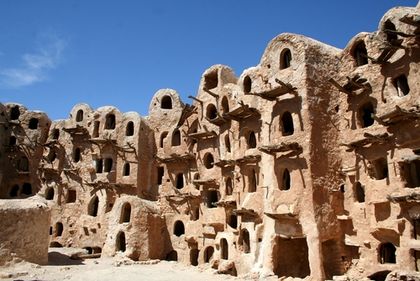 Libya is a North African country, which shares a border with the Mediterranean Sea to the north, Egypt and Sudan to the east, Niger, Chad and Sudan to the south, and Algeria and Tunisia to the west. With 1,759,540 square kilometers of area (679,358 square miles), it is slightly larger than the State of Alaska. The length of its land border and its coastline is 4,383 kilometers (2,723 miles), and 1,770 kilometers (1,099 miles), respectively. With the exception of Sabha, located in the south, all its major cities—including the capital city of Tripoli—are along its coastline.

While its share of GDP is only 52.8 percent (est. 1994), industry is by far the most important segment of Libya's economy, since it encompasses the oil industry, which is vital to the country's economic survival.

As the main export item, oil dominates Libya's mining industry. Estimated at 29.5 billion barrels in 1998, Libya's oil reserves ensure exports until 2053 at the 1999 export level of 1,137,000 barrels per day (b/d). The Libyan government owns 5 oil refineries in Libya as well as a network of oil refineries in Italy, Switzerland, and Germany in partnership with European oil companies.

Libya's oil production has decreased significantly since the 1970s. In 1975, the Libyans reduced their production from 3.32 million b/d to 1.48 million b/d, for fear of drying up their resources. Managerial problems, OPEC quotas, and sanction-created shortages of spare parts and investments have further lowered production. Sanctions have also resulted in a decrease or stoppage in production of certain oil products (e.g., gasoline), which then had to be imported. American sanctions are still in force, but the 1999 suspension of UN sanctions opened the way for Europe's involvement in Libya's oil industry.

With estimated gas reserves of 1.5 trillion cubic meters, Libya is also rich in natural gas, but most of its reserves are undeveloped. The Libyan government has tried to develop them to increase the life of its oil reserves by replacing oil with gas for domestic consumption, and also to increase its gas exports. Development projects include 2 gas pipelines to connect 4 new gas-powered electricity generators to the national grid, and a US$5.5 billion project with Italy for the development of onshore and offshore gas reserves and the construction of an undersea pipeline to export gas to Italy. On average, 20 to 25 percent of annual gas production (6.4 billion cubic meters in 1998) is exported mainly to Italy and Spain.

Iron ore and salt are other major resources that play a role in Libya's economy. The iron ore resources are estimated at 700 million metric tons and are located in southern Libya far from its iron and steel complex. Their development has been delayed due to the absence of financing for building the required rail link. Libya's salt mines—located mainly around Tripoli and Benghazi—produce 30,000 metric tons annually. There is also a limited extraction of construction materials (e.g., limestone, clay, and stone).

Libya's manufacturing industry is not well-developed. Ambitious projects in heavy industries (e.g., aluminum and fertilizer complexes) have been partially realized at best, as various sanctions have limited funds, denied foreign investments, and severely restricted transfer of technology and sale of required equipment. Manufacturing establishments suffer from a shortage of spare parts and poor maintenance, which lower their production. The current share of this industry of GDP must be well below its 1994 share of about 10 percent.

Besides a few joint ventures (mainly with Italy), most manufacturing establishments are Libyan. They are mostly small- and medium-sized factories producing light and consumer goods (e.g., foodstuffs, wood, paper, textiles, and VCRs). The limited heavy industries include an iron and steel complex, a petrochemical complex, and a pharmaceuticals plant. Libya produces about 3,000 cars a year, and assembles trucks in joint venture with Italy. The manufacturing products are far short of domestic demand, making Libya very dependent on imports.

Thanks to extensive hydrocarbon supplies and water projects, construction is a major industry. Two long-term major projects are the construction of the Great Man-Made River to transfer water from Libya's southern water resources to its major urban and farming areas in the north. It has received an average of 10 percent of government annual expenditures since 1984. Another project is a large gas development and pipeline construction with Italy. There have been modernization projects in major cities including Tripoli since the suspension of UN sanctions.

Services form a growing economic sector, which accounted for about 40 percent of GDP in 1994. Given the suspension of the UN air embargo against Libya in 1999, the expected growth in tourism in the first decade of the 21st century should strengthen the role of this sector in the Libyan economy.

The Libyan government controls the financial system, including banking, insurance, and investment activities. In 1970, it nationalized all financial institutions, but economic problems forced it to allow the operation of private banks in 1993. With one exception in Misurata, no private bank has been established yet. Nor is there any foreign bank, excluding the Arab Banking Corporation, a Baharini bank partly owned by Libya. The banking system consists of the Central Bank of Libya and 8 major banks: the Agriculture Bank, the Jamahiriya Bank, the National Commercial Bank, the Savings and Real Estate Investment Bank, the Umma Bank, the Wahda bank, the Sahara Bank, and the Libyan Arab Foreign Bank. The last 2 are among the top 1,000 banks of the world. State-run companies provide insurance and business services. The Libyan finance ministry conducts foreign investments through the Libyan Arab Foreign Investment Company, which has invested US$500 million in 45 countries.

Libya has an underdeveloped tourist industry, although it has the potential to grow. As a Mediterranean country with long warm beaches and historic sites, Libya could attract many Europeans who currently vacation on the inexpensive warm coastlines of Libya's North African neighbors Egypt and Tunisia. The industry, however, lacks an adequate infrastructure such as hotels. Furthermore, the sanction-related fall of tourism has turned many Libyan beaches into garbage dumps. Anticipating an upsurge in the tourist trade in the wake of the lifting of UN sanctions, a tourist center, including a large hotel and entertainment facilities, is being built in Tripoli.

The Libyan transportation industry is significant, but has suffered a great deal from sanctions. Its merchant fleet consists of 27 vessels and is oriented towards oil and gas exports. Libya's civilian air fleet, under-utilized from the sanctions, will be expanded by the purchase of 24 Airbuses as part of a government plan announced in 2000.

Libya has no territories or colonies.