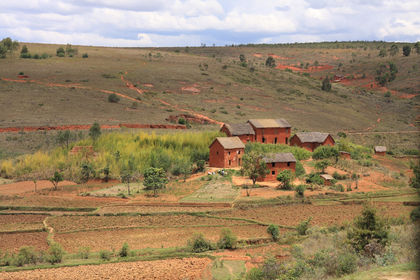 Madagascar lies in the southern Indian Ocean some 400 miles off Africa's eastern shore. With a land area of 587,039 square kilometers (226,656 square miles) Madagascar is a little less than twice the size of Arizona. It is also the world's fourth largest island, with a coastline of 4,827 kilometers (3,000 miles). Madagascar's capital is Antananarivo (population 2 million), located on its central plateau 1,468 meters (4,816 feet) above sea level. Other major cities include Fianarantsoa (population 440,000), inland in the southern part of the island; Taomasina (population 330,000), the principal port, located on the eastern seaboard; Antsiranana (population 320,000), at its northern-most tip; and Mahajanga (population 295,000), site of the country's second international airport. Madagascar's highest point is a mountain called Maromokotro (2,876 meters or 9,436 feet), located in the Tsaratanana Massif region along the island's central spine.

Demographic statistics for Madagascar are scarce and often unreliable, but a mid-2000 estimate by the U.N. Population Fund places its population at around 15.9 million. Although relative to its size this figure is below the average of its sub-Saharan neighbors, growth is brisk. With an annual birthrate estimated at 42.92 per 1,000 of population—around 3 percent per annum for the years 1995 to 2000—the fragility of Madagascar's environment makes this expansion a significant concern. The average life expectancy at birth of 54.95 years is relatively high by sub-Saharan standards, but poverty and malnutrition are nevertheless endemic, sanitation is very poor, and disease (especially cholera and malaria) is an ever-present threat. Some 27 percent of Malagasy (the people of Madagascar) lived in urban areas in 1998, a population segment which was growing at the rapid rate of 5.6 percent a year as rural inhabitants quit the countryside for the cities.

Ethnically, Madagascar is an unusual mix. Its 2 largest ethnic groups are the Indonesian-descended Merina (26 percent) and Betsileo (12 percent), who are historically concentrated in the central highlands, including the capital. Other groups include the Arab-African Betsimisaraka (15 percent) and Tsimehety (7 percent) of the east and north, respectively; and the Antandroy, of more purely (Bantu) African origin, in the south (5 percent). The prevalence of a unified language, the Malay-Indonesian Malagasy, has tended to work against sharp ethnic divisions, though there is some on-going chafing against Merina political domination. Religiously, 52 percent of Madagascar's people hold indigenous beliefs, 41 percent are Christian and 7 percent Muslim.

Madagascar's climate, beaches (4,827 kilometers—or 3,000 miles—of them), and unique ecology (Madagascar is home to many endangered species of flora and fauna) make tourism one of its most dynamic and promising sectors. The industry has the potential not only to create jobs and wealth, but to turn Madagascar's unusual and endangered environment into a productive asset. Interest is great, and two-thirds of the country's visitors come for eco-tourism. In 1998, tourists brought in US$92.2 million. But although visitor numbers are rising steadily (doubling since 1994), volume is still low.In 1997 Madagascar attracted less than a fifth of neighboring Mauritius's 536,000 visitors. Further development of the industry also faces significant difficulties. Air links to Europe and Asia are few and expensive, hotel facilities are sparse and inadequate, and investment is scarce. Government attempts to meet these obstacles have included rationalizing (removing inconsistencies and streamlining) the relevant laws, creating a coordinated tourist authority, and liberalizing the airline market.

Limitations in the financial sector continue to impede growth. The nation's assets are controlled by the central bank and 5 commercial banks, the largest of which, BNI-Credit Lyonnais, has a total asset base of US$200 million. Few Malagasy, however, qualify for these banks' services. The problem is especially acute in the rural areas where only 1.5 percent of small farmers have access to credit; the agriculture sector itself receives only 5 percent of total lending. High interest loan rates and fees have also discouraged business borrowing. The lack of a stock exchange and shareholding culture have further restricted financing options.

Few in Madagascar can afford more than the bare essentials, and steady depreciation of the currency has eroded purchasing power even further. This combined with the poor condition of the country's transport network means that trade tends to be localized and retailing minimal. However, the opening of the economy has expanded the range of goods available somewhat, especially in the main urban centers like Antananarivo.

Madagascar has no territories or colonies.

Whoo!!! This article was the best thing ever in the world!!! I say this because I had to do a power point on madagascar and this had everything that I wanted! I give you kudos
2
shavonte

Thank I had to do a powerpoint presentation on Madagascar and this helped me.
4
Me

I have to admit this was a really nice artical, I needed info. for a project and this have a few things I needed. Thank You So much.
5
carlos

I had visited Madagascar from 16 September 2013 till 1 October 2013. I had visited Tamatave, Foulepoint and Mahambo. Magnificent beautiful coastline and photo opportunity's. However, the country is filthy, roads very very bad condition, no proper infra-structure, for example; Restaurants (That's worth calling a Restaurant) warm water, clean food (flies accepted as part of preparing your food)Hotels, shops, toilet facilities, no well trained chefs to prepare food etc. Small children next to major roads filling up potholes to earn some ariary (there local currency. This Island can be turned around in a major tourist destination, but ...
7
Alexis

this website is nice for some good information to use for projects :)