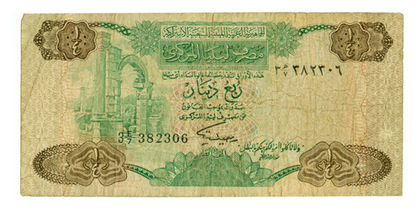 There are currency restrictions for Libyans and foreigners. Libyans travelling abroad may purchase a certain amount of currency (about US$6,000 in 2000) while foreigners entering Libya have to declare their currencies and leave the country with no more than the declared amount.

In absence of reliable statistics on fluctuations of price changes, it is difficult to determine inflation rates in Libya. The existing rates for the second half of the 1990s are therefore estimates. The inflation rate was estimated at 18 percent in 1999, a significant decrease from the average annual rate of 28.5 percent for the period 1995 to 1998. A major reason for such high rates is the heavy government subsidies for domestic foodstuffs, which it has kept despite their huge cost for an economy heavily dependent on large food imports. Scarcity of many consumer goods provoked rising prices, which further worsened inflation . Economic sanctions, with their limiting effects on trade, and the closure of many retail stores in the second half of the 1990s as part of a government crackdown on the black market, were 2 major

contributing factors. The suspension of UN sanctions in 1999 improved the availability of consumer goods and paved the way for a higher oil-and natural gas-generated income as European oil companies began to return to Libya. These factors, and lower spending by the Libyan government, helped reduce the inflation rate to 18 percent in 1999. Various government subsidies (e.g., free education and medical services and low-priced foodstuffs) helped the Libyans cope with the impact of Libya's high inflation rates without a sharp decline in their living standards.

I love libya!! HOPE IT IS BETTER. I want to vist libya when it's better.